Today, American Express published its first comprehensive Corporate Social Responsibility Report since 2008. The report highlights the company’s efforts to create social, environmental and economic value for its stakeholders as well as operate ethically and responsibly.

“At American Express, we are dedicated to treating everyone we serve with the utmost care and respect,” said Kenneth I. Chenault, Chairman and CEO, American Express Company. “As the world evolves, we will continue transforming to meet the needs of our stakeholders while remaining true to the values that have always sustained us.”

“The Service Effect” highlights the myriad ways in which American Express’ commitment to service shapes its daily work and approach to CSR across the following spheres:

Its People
The report features the ways the company makes it welcoming, purposeful and rewarding to be part of the American Express team. Highlights include:

Customers and Partners
The report offers examples of how American Express uses its relationships, technology and data to better serve its customers and open up commerce opportunities for its partners. Highlights include:

Communities
The report provides a snapshot of the company’s philanthropic and community work to empower volunteers, promote stewardship of historic places and support those who are addressing some of society’s most complex issues. Highlights include:

The Environment
The report describes how American Express does its part to sustain the world’s resources across three main action areas: building a clean, efficient enterprise; enabling its customers to reduce their environmental impacts; and encouraging employees to help the company achieve its goals. Highlights include:

1The Small Business Saturday Consumer Insights Survey was conducted in the United States among a nationally representative sample of 2,363 males and females 18 years of age or older. The sample was collected using an email invitation and an online survey. The study was conducted anonymously by independent marketing performance specialist Ebiquity on November 29, 2015. The survey has an overall margin of error of +/- 2.0%, at the 95% level of confidence. 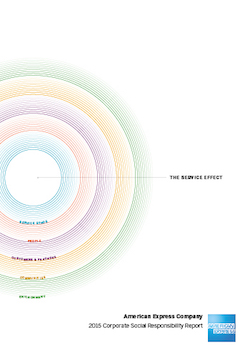