Are Carmakers Ready for the Urban Mobility Revolution?

By 2035, more than 60% (pdf) of the world’s population are projected to be urban dwellers. That could result in denser cities, more competition for housing and added congestion caused by cars.

Plans are underway to keep these issues in check. Urban planners are enforcing restrictions on cars in some cities, leading to a greater adoption of shared rides and vehicles. Meanwhile new data shows that young people are driving less, with fewer getting driver’s licenses before age 25 than in previous generations. That’s because mobility is becoming another facet of life that’s treated and consumed as a service. And things like crowd-sourced mapping, mobile payments and unlocking vehicles via cellphone are increasingly being integrated into transportation.

In response, auto manufacturers – whose sales are still climbing – are establishing their own models of shared car services. Although these moves may seem counterintuitive for a carmaker, they are indicative of how customer preferences and societal trends like urbanization are prompting businesses to adapt. Ownership models are changing. Vehicle usage is changing. And it’s important to note that on any given day, 96% of cars are parked and unused.

From car ownership to mobility

General Motors CEO Mary Barra has said she expects the auto industry to change more in the next five years than it has over the last 50. To prepare, GM reshaped its business model by investing in the ride-hailing company Lyft and launching the car- and ride-sharing service Maven. Other companies have also started programs to test the waters of car- and ride-sharing.

A decade ago, automotive innovation and technology were centered inside the car and under the hood. Now the focus is drawn outward through connectivity. On an industry level, manufacturers are building urban mobility strategies that facilitate peer-to-peer or commuter pooling options.

“Increasingly now, it’s getting into new areas that treat transportation more as a service,” says Peter Kosak, GM’s executive director of urban mobility programs. “The hallmark characteristics are providing access, options and a user experience that’s as frictionless as you can get.”

Future of the driverless car

Companies are also preparing for the future of autonomous driving, including crowdsourcing highly precise maps that help enable cars to run without a human at the wheel. This could be especially useful in places like college campuses, where finding somewhere to park a car can be a major hassle.

Maven recently announced a program serving more than 100,000 people in Ann Arbor, home of the University of Michigan. It’s offering 21 vehicles housed at various parking spots around the city that can be reserved and accessed using a phone app. This could potentially be a foundation for a driverless car system in the future.

GM is also gathering information from its strategic alliances across the globe to better inform its approach to car sharing and ride sharing. In Germany, it offers peer-to-peer car sharing through the CarUnity marketplace. Nearly 10,000 users have signed up in Frankfurt and Berlin since it launched in 2015. The auto manufacturer is also running carpool programs in Germany and China to refine and test future offerings.

In the end, the key to any successful program or strategy is keeping the power in the hands of the people – with connectivity as the driving force.

“What closes the loop – and this is where the revolution is occurring – are all the things that enable a shared-use system that essentially feels like ownership,” says Kosak. “If you can make it seamless, convenient and without question reliable, these are the kinds of things that will unlock the potential of sharing, and make sharing something more people will want to do.” 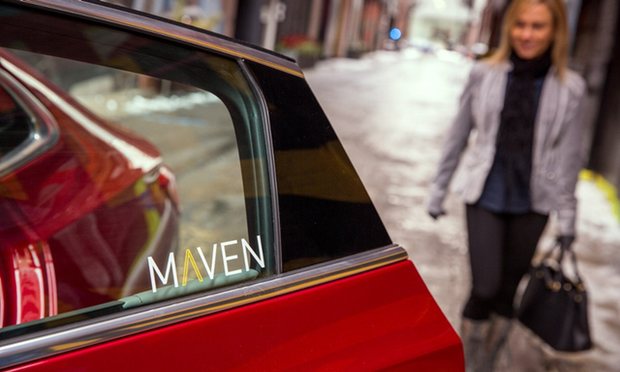