As Seen on The Guardian: Tiny Houses and Other Little Matters Prove Less is More for the Environment

Little things mean a lot for the Earth.

To that end, some people are opting for smaller living spaces and fewer belongings. Thanks to the advent of the sharing economy, you can use anything from sports equipment to tools and automobiles without purchasing them. And tiny houses, along with reduced or conscientious purchases, can decrease your contribution to global warming.

Not only are these tiny houses compact, efficient and quirky, they also help the planet. According toRecycle Nation, it takes lumber from seven logging trucks to build the average house in the US. But with a tiny house, only half of one truck’s worth of wood is necessary. That comes to a 93% reduction in the number of trees needed to construct a diminutive dwelling, not to mention lower associated fuel and energy costs.

Get from here to there more efficiently

Transportation, meanwhile, in 2014 contributed to 26% of US greenhouse gas emissions. Luckily, there are several ways to reduce that impact.

One option: like recent Nobel prize winner Bob Dylan did in 1965, go electric. Buyers can receive a federal tax credit of up to $7,500 for a nonpetroleum auto like the Chevrolet Bolt EV, which according to the Environmental Protection Agency (EPA) has an estimated 238 miles of range on a full charge – so there’s significant savings by skipping the gas pump, too.

The aforementioned sharing economy is another avenue to emissions reduction. Car-sharing services like Car2Go and GM-owned Maven help to reduce the number of vehicles on the road. A July 2016 study by the Transportation Sustainability Research Center (pdf) at the University of California, Berkeley, found that up to 10 vehicles were removed from the streets of five major US cities for every one shared car used. Thesame study also found that 5,300 to 10,000 metric tons of greenhouse gases were reduced in the same cities.

Still attached to your traditional ride? Then consider these little ways to cut your carbon footprint while using your car:

No effort’s too small

Not everyone can switch to a tiny house or electric car, but people can lower the amount of waste they produce all the same.

Evaluate your needs. For example, fast fashion, or the moving of runway looks to the consumer market quickly and cheaply, is contributing to consumers around the world buying more than 80bn items of clothing each year. Before making a purchase, survey your closet and consider the necessity of the item. Is it something that will last with changing trends?

Finally, do business with companies and large corporations that are making changes such as improved packaging that creates less waste and optimized shipping routes. Such businesses are inherently greener.

Although they won’t be as life changing as moving to a tiny house, all these efforts contribute to reducing consumers’ carbon footprints around the world.

Reposted from TheGuardian.com/General-Motors-Partner-Zone with permission. 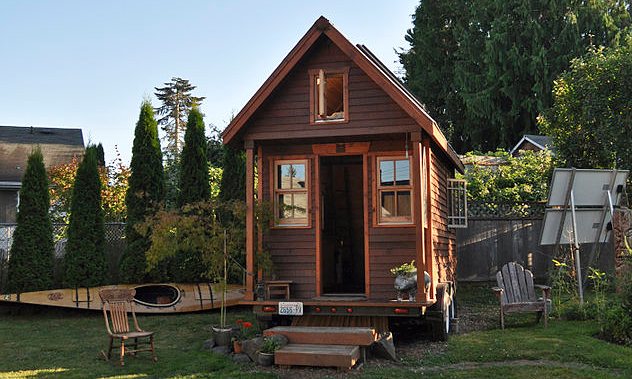