As Seen on The Guardian: What Will the Highway of the Future Look Like?

Dutch artist and designer Daan Roosegaarde has always been fascinated by public spaces. That’s why, as automakers dedicate more resources to the production of smarter, environmentally friendly vehicles, he’s on a related mission: to reimagine the roads on which those cars of the future will drive.

Roosegaarde and his team have been conceptualizing ideas that combine beauty and creative problem solving. One example is their Glowing Lines project, in which they installed dark lines of paint on the N329, a highway southwest of Amsterdam. The special paint, made with a secret formula, is able to collect energy from sunlight during the day and then turn fluorescent at night, helping to illuminate a roadway where there are no streetlights. Roosegaarde’s team has also worked on a lane for roadways that would help recharge the electric vehicles driving on it.

“One day, I was sitting in a car on a highway somewhere in Europe looking out my window and realized: ‘Isn’t it weird that when we talk about mobility and innovation, everybody always focuses on the car?’” Roosegaarde says. “That’s great, but how come the thing we actually see while we’re driving – the road – is completely disconnected from this creative way of thinking? As the car gets smarter, the infrastructure somehow has to catch up as well.”

The good news: government officials, car manufacturers and academics are now on the same page as Roosegaarde.

Roosegaarde’s Glowing Lines effort might appear like a fun project by a whimsical designer. But if autonomous vehicles and smart cars powered by advanced computing systems are going to be the norm in the future, innovations like these will also serve a more critical purpose.

Autonomous vehicles have advanced sensors, cameras and other visioning systems, and need to be able to “see” and make sense of the environment around them. That means things like roads, signs and construction obstacles will have to be technologically advanced as well ­– and over long stretches.

One testing ground for such innovation is a stretch of highway in southeast Michigan. Automakers such as GM and Ford, along with researchers from the University of Michigan (UM) and the Michigan Department of Transportation (Mdot), are collaborating to build infrastructure including cameras and sensors that communicate with connected cars about things such as adverse road conditions.

So far about 15 miles of highway have been outfitted with this new technology. It is part of a larger project by UM’s Mobility Transformation Center, where solutions for connected and automated vehicles are tested in a safe, controlled environment.

Peter Kosak, GM’s executive director of global urban mobility programs, sees infrastructure renovation as a key step to pushing ahead of mainstream adoption of fully autonomous vehicles. “One part of it really is the technology in the vehicle fleets,” he says. “The other piece of it is the infrastructure for those vehicles to be deployed and maintained.”

Urbanist Anthony Townsend agrees, adding that society must be ready for when autonomous vehicles become more prevalent on roads. “We don’t know what kinds of businesses people will start in which they use autonomous vehicles,” he says.

“They may find it economical to deliver things that have never been delivered before, which would put more vehicles on the road. Or send their cars out to pick up children or the elderly. It’s going to be a mixture of policy, how markets evolve, how technology responds, how people behave, and the way we design our communities and roads,” Townsend says.

Making use of the elements

High- and low-tech road innovations are manifesting. Townsend says he believes highways of the future will see less computerized innovation and more materials-based creative thinking along the lines of Roosegaarde’s glowing paint project. “My sense is that the future of highways will be less about internet stuff and more about structural kinds of things,” he says. “Things like roads that can generate energy through various kinds of renewable material.”

The transportation consultancy Arup’s Future of Highways report also predicts that systems will rely on the natural environment. “For example, concrete that uses bacteria to heal cracks could significantly reduce the cost of a structure,” the report says. “Roads could become giant solar panels and recharge cars wirelessly as they travel. They could even include LED (light-emitting diode) lighting and heating elements to melt ice and snow.”

The Arup report presents a spectrum of technologies, materials and modes that could eventually encompass a built-out, robust, smartly designed highway infrastructure of the future. This could guide the construction of a mobility network that is safe, accessible and energy efficient – while reducing congestion as well as greenhouse gas emissions and other forms of pollution.

Innovators like Roosegaarde – who calls the role of designer as “hippie with a business plan” – are excited by the challenge of creating a framework for the healthy future of long-distance ground travel.

“For me, design is not about making another chair or another lamp or another table – it’s about improving life,” he says. “And roads are a natural interface for that.”

Reposted from TheGuardian.com/General-Motors-Partner-Zone with permission. 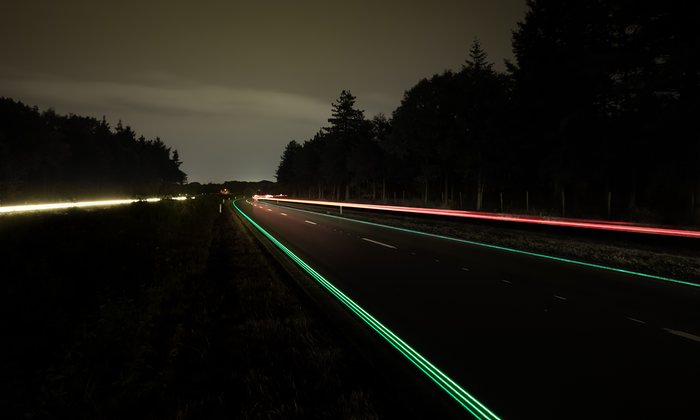