Bacardi Ltd. is a world famous maker of rum, but the company is becoming known for something else: its sustainability measures. After highlighting significant reductions in water and energy use in its 2013 corporate social responsibility (CSR) report, Bacardi recently announced new energy efficiency measures.

These measures include installing solar skylights, which increase natural light, and ceiling insulation, which helps control temperatures in the company’s warehouses where rum sits inside white oak barrels to process. The company is located in Puerto Rico, a “small Caribbean island with limited resources,” as Julio Torruella, project director for Bacardi in Puerto Rico, said in a statement. Because of the company’s location it continues to look for ways it can get the best use out of the natural resources of the island. Installing skylights is one way that Bacardi can maximize its use of sunlight, the company said.

Bacardi has already reduced energy use by 25 percent since it began tracking its global impacts on the environment in 2006. In addition, the company has reduced greenhouse gas emissions from rum production by 48 percent. One way Bacardi reduces energy use of non-renewable sources and reduces GHG emissions is through the use of renewable energy. Bacardi’s distillery in Catano, Puerto Rico is partly powered by two wind turbines that generate a combined total of 500 kilowatts (kW).

Click here to continue reading about Bacardi on TriplePundit 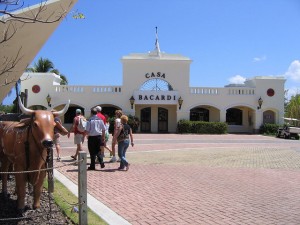