Bloomberg QuickTake: Crude on the Rails

Striking oil in North America is easy these days. What’s tricky is getting the stuff to customers. The U.S. has passed Saudi Arabia as the world’s largest producer and Canada’s recoverable reserves are the third-biggest globally. But existing pipelines don’t have the capacity or don’t go to the right places, and building more has proven politically challenging. That means record volumes of oil are traveling by rail, adding a contentious new element to the fierce debate about the safety and environmental impact of the region’s energy renaissance.

Environmental concerns lie at the heart of efforts to block permits for rail terminals where oil would be delivered to refineries. Safety takes center stage in accidents involving oil trains. On Feb. 16, a train carrying oil from North Dakota derailed and ignited in West Virginia, forcing the evacuation of more than 100 residents and endangering the drinking water supply. There were four major North American oil-train derailments in six months leading up to a conflagration in rural New Brunswick, Canada, on Jan. 7, 2014. The deadliest incident came on July 6, 2013, when a runaway train hauling 72 carloads of crude derailed in Lac-Megantic, Quebec, causing an explosion that killed 47 people, incinerated 30 buildings and transformed the downtown into a smoldering hellscape. The investigation that followed raised questions about trains operated by a single engineer and about the soundness of the tanker cars involved in the crash. To increase safety, the U.S. Department of Transportation is scheduled to adopt new tank car standards in May. Industry groups worry that the new rules, if too stringent, will cause a shortage of tank cars and stall oil shipments. Most of the U.S. oil shipped by rail comes from North Dakota because there aren’t enough pipelines to take it from there to coastal refineries. The proposed $5.4 billion Keystone XL pipeline, opposed by U.S. President Barack Obama and environmentalists but favored by Congress and the Canadian government, has the potential to ease demands on North America’s railway network to a limited extent by moving 830,000 gallons per day of Canadian oil sands crude. Rail explosions have led advocacy groups to push for producers to remove volatile liquids and chemicals from North Dakota crude before transporting it. Oil sands crude is thick sludge that is not easily ignited.

Shipments of oil by rail increased 17 times faster than crude production in the U.S. in 2012, according to figures compiled by Bloomberg. This has been a boon to the railroads, which are contending with a precipitous drop in demand for coal, their biggest cargo, as utilities switch to cheaper natural gas. Fracking and other advanced techniques of oil extraction pulled crude from the ground in places like North Dakota where pipeline capacity is limited, meaning rail is often the only way to deliver the crude to refineries. The Association of American Railroads says the number of oil carloads rose more than 40-fold from 2009 through 2013, when 435,560 carloads were shipped, and kept climbing last year to an estimated 500,000.

The rail and pipeline industries each claim a safety advantage over the other and marshal supporting statistics. Railroads have had more mishaps while more oil has been spilled from pipelines. The Lac-Megantic accident shows one danger presented by rail that’s usually absent with pipelines: Because train tracks often pass through cities and towns, the danger to life and property is more acute. In neither mode of transport, though, are accidents common. “Over 99.9 percent of deliveries make it to the end user without incident,” said Cindy Schild, a senior manager at the American Petroleum Institute. Environmentalists dislike both, arguing that train and pipeline accidents demonstrate the desirability of reducing the use of fossil fuels. 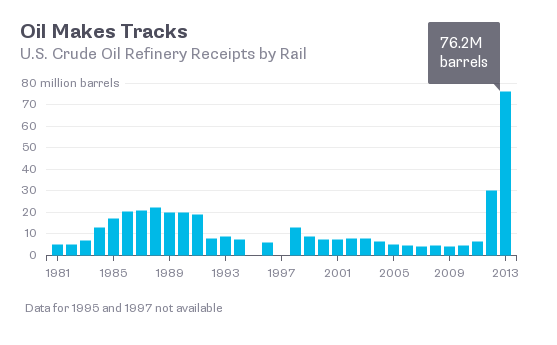