The world’s police chiefs and the Catholic Church reaffirmed their efforts to eradicate human trafficking this week.

The Santa Marta Group, an international alliance of police chiefs and bishops, concluded a two-day summit in Rome today to review anti-slavery challenges and share their ideas for combating growing worldwide issues. Ending human trafficking is one of Pope Francis’ highest priorities. The group’s fourth meeting in Rome comes just a few days after the U.S. Advisory Council on Human Trafficking released its first report.

The group has been credited for raising awareness and for prompting legislation and increased prosecutions in various countries, particularly in the United Kingdom and, more recently, in the Pope’s home country of Argentina.

As both the Santa Marta Group and U.S. Advisory Council have reported, human trafficking and slave labor are complex and dynamic issues.  As these groups and other NGOs around the world continue to push human rights abuses to the forefront of public discourse, and as more businesses are being charged with crimes related to forced labor, any business with an international supply chain may be subject to increased government and public scrutiny.

Source Intelligence provides the world’s most comprehensive compliance solutions to help companies protect themselves from non-compliance consequences and establish ethical and socially responsible sourcing programs.  In addition to collecting and analyzing data on a 24/7 basis from hundreds of global supply chains, Source Intelligence’s robust platform allows companies to gain insight into their supply chains and minimize risk.

Efficient use of existing compliance data will be the subject of a webinar on Nov. 17th hosted by Source Intelligence: Approaching Modern Day Slavery: Using Your Existing Compliance Data To Develop a Robust Anti-Slavery Program. The webinar will feature Kilian Moote of KnowTheChain.org, a resource organization for businesses that was formed in reaction to California’s anti-slavery law (SB 657) and has since expanded to provide guidance on the U.K. Modern Day Slavery Act.  KnowTheChain.org is currently benchmarking 60 global enterprises to determine how industry groups are improving efforts to protect workers’ rights. The webinar will also feature Kristen Sullivan, who leads the Americas group sustainability reporting for Deloitte and Touch. Source Intelligence’s own Chief Scientific Officer, Jennifer Kraus will also be joining the webinar to speak about the critical importance of data quality and validation. To learn more about Source Intelligence’s upcoming webinar, click here. 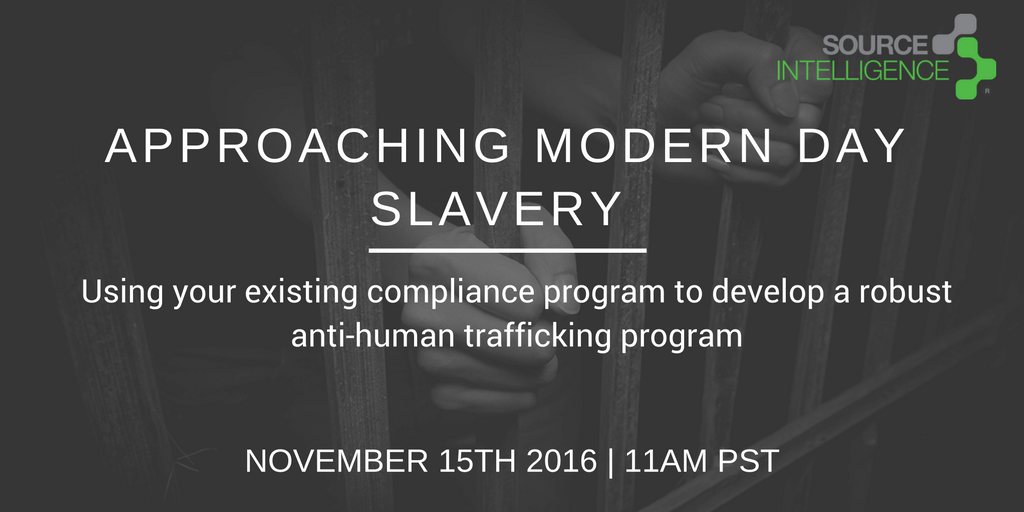