Jun 29, 2017 2:00 PM ET
Tweet This:
Check out how @CocaColaEP met its #sustainability targets in its Stakeholder Progress #Report http://bit.ly/2tkx1xi via @ReportAlert
Article

This is the company’s first update to stakeholders on sustainability since its creation from the merger of Coca-Cola Enterprises (CCE), Coca-Cola Erfrischungsgetranke (CCEG) and Coca-Cola Iberian Partners (CCIP) in May 2016.

It shows that CCEP has:

This stakeholder progress report comes before the release of new sustainability targets and commitments this autumn, which will form the first sustainability strategy for Coca-Cola in Western Europe.

Reflecting on the progress made in 2016, Damian Gammell, CEO of Coca-Cola European Partners, said: “When we created the world’s largest Coca-Cola bottler, we put sustainability – in it broadest sense – at the heart of the business. CCEP’s first Stakeholder Progress Report provides a clear view of the foundations upon which we will build, from transforming our drinks portfolio and packaging to working with our local communities. I am proud we have achieved so much since forming CCEP and this is truly down to the passion and commitment of our employees and the great partnerships that we have developed with suppliers, customers, local communities, NGOs and stakeholders.”

Notes to Editor
ABOUT CCEP
Coca-Cola European Partners plc (CCEP) is a leading consumer goods company in Europe, selling, making and distributing an extensive range of non-alcoholic ready-to-drink beverages and is the world’s largest independent Coca-Cola bottler based on revenue. Coca-Cola European Partners serves a consumer population of over 300 million across Western Europe, including Andorra, Belgium, continental France, Germany, Great Britain, Iceland, Luxembourg, Monaco, the Netherlands, Norway, Portugal, Spain and Sweden. The Company is listed on Euronext Amsterdam, the New York Stock Exchange, Euronext London and on the Spanish stock exchanges, and trades under the symbol CCE. For more information about CCEP, please visit our website at www.ccep.com and follow CCEP on Twitter at @CocaColaEP. 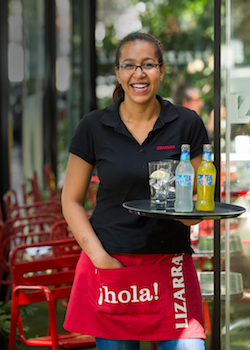