They come from Syria, Afghanistan, Eritrea, Nigeria, Gambia, Pakistan, and Iraq. Some of them fled their homeland only recently, while others applied for asylum in Germany quite some time ago. Now they are all here, in Stuttgart-Untertürkheim — 39 men and one woman thrown together from different cultures, but all of them with a common goal: They want to work in a country whose language, culture, and working world they barely know — or at least not yet because starting today, November 9, 2015, that’s all going to change. November 9 2015, is “Welcome Day” for the participants in the first “bridge internship” offered by Mercedes-Benz. “This project is  esigned to enable people to obtain an initial qualification that will build a bridge to the German labor market,” says Fabian Lorenz, Head of Human Resources management at the Untertürkheim plant. “We as a major company are making our infrastructure and financial strength available for this on a scale that virtually no small or mediumized business would be capable of.” There were plenty of new things for the 40 interns to learn about on their first day in Untertürkheim — for example contracts were explained, behavior guidelines illustrated, facility layouts  distributed, and route plans handed out. The group broke up the next day, with half of the interns beginning a job in the axle production unit and the other half heading off to the transmission logistics department. They then switched places six weeks later, halfway through the internship. This ensured that all of them were presented with as wide a range of tasks and challenges as possible. They learned how to operate machinery, stack shelves in warehouses, sort and pack parts, and clean up work areas. Half of the day focused on practical careeroriented learning, while the rest of the time was spent in a German course organized by Daimler. The first “bridge internship” was a test for both the organizers and participants to see whether the program’s mixture of language instruction and a practical internship would work properly.

It was also important to find out whether people from such diverse backgrounds could participate in a project together without any conflicts arising. In addition, the organizers wanted to determine how smoothly the various internal departments and external partners in the project would cooperate with one another. “Everything was new for us in the beginning,” says Lorenz. “Coordination between the many interfaces in the project was also a challenge. A huge amount of people were involved, including representatives from the Federal Employment Agency and local job centers, as well as internal staff members and language instructors.”

REAL OPPORTUNITIES ON THE LABOR MARKET

After 14 weeks, it was clear that the project had been a success. The 40 participants had acquired skills that offer them real opportunities to enter the German labor market. In the language courses, for example, the interns had learned how to write resumes and they had also practiced job interviews. Many of them already have solid prospects — nearly all of the interns have received job offers, in most cases from temp agencies. Two of the participants will begin an apprenticeship at Mercedes-Benz in September 2016 and will continue to work in the factory until then.Everyone in Untertürkheim pulled together to make the project work. There was a lot of good will among staff members, and the participants displayed great dedication as well. “Most of our people took extra time to help out in some way with the internship program,” says Romina Kellermann, a Human Resources manager who also helped coordinate the pilot project. “Our employees were very willing to contribute and they remain committed to the project concept. “I also think it’s remarkable that there were no conflicts between the participants from all different nations and cultures. I really didn’t expect things to go so smoothly in that sense.”

The project’s success was in no small part due to people like Okkan Kilic, who served as the Works Council liaison to the interns. Kilic is familiar with the culture that many of the interns come from. He was born and raised in Germany but his family is originally from Turkey and his parents are from an area close to the Syrian border, which is why Kilic also speaks the refugees’ language. “I spent a lot of time talking to the interns as often as possible,” he says. “At first, I mainly wanted to make sure the project ran smoothly, but then I began to see more and more how these people had been through something terrible and how difficult the whole situation was for them.” The interns grew to trust Kilic and they told him about the homeland they had lost — about cities that had been destroyed and people who lost everything, and about how the refugees still fear for the safety of those left behind.Many of the refugees had worked as lawyers or craftsmen,or had their own businesses. Now, however, they had nothing. Some of them even told Kilic about truly horrible things — the aftereffects of torture, war wounds, and the deaths at sea of their own children who were attempting  to flee with them. “These stories really got to me,” Kilic says. “I think people here don’t really understand the incredible emotional stress that many of these people have to deal with. In my opinion, we all should be doing more about that.” It seems almost like a miracle that most of the refugees have been able to summon up courage and look toward the future despite this emotional burden, which in some cases is extreme. Many of them were highly motivated during their internships and childishly happy whenever they accomplished something new. “There was nothing but big smiles all around when they received their certificates at the end of the internship,” says Kilic. “That was the best thing for me — seeing all of them so happy.”

LOOKING AHEAD TO THE FUTURE

Even without the emotional stress of fleeing their homeland, it’s by no means easy for the refugees to adapt to a new culture and unfamiliar expectations regarding performance, discipline, and the work ethic. It was therefore very important for management in Untertürkheim to ensure that the participants would put what they learned to work after they completed the internship, and start taking the next steps forward. “We wanted to make sure they didn’t fall into a kind of black hole, and that they would understand what their next steps should be,” Kellermann explains. “That’s why we invited companies to the plant on the last day and organized job interviews for the interns to help place them in jobs. We then kept in touch with the companies for several weeks in order to clarify any questions and provide assistance.”All plants in Germany have now launched “bridge internships”with formats based on the pilot project in Untertürkheim,where the team is now preparing for a second program in September that will offer opportunities to another 60 refugees. Kellermann says she’s optimistic: “Integration is certainly not an easy thing, but our little example here with 40 interns shows that good things can really be accomplished. There’s a lot of talk in the media about how much of a challenge it is to take in all of these people, but I believe that here in Untertürkheim we’ve taken an initial step toward effectively dealing with this issue.” 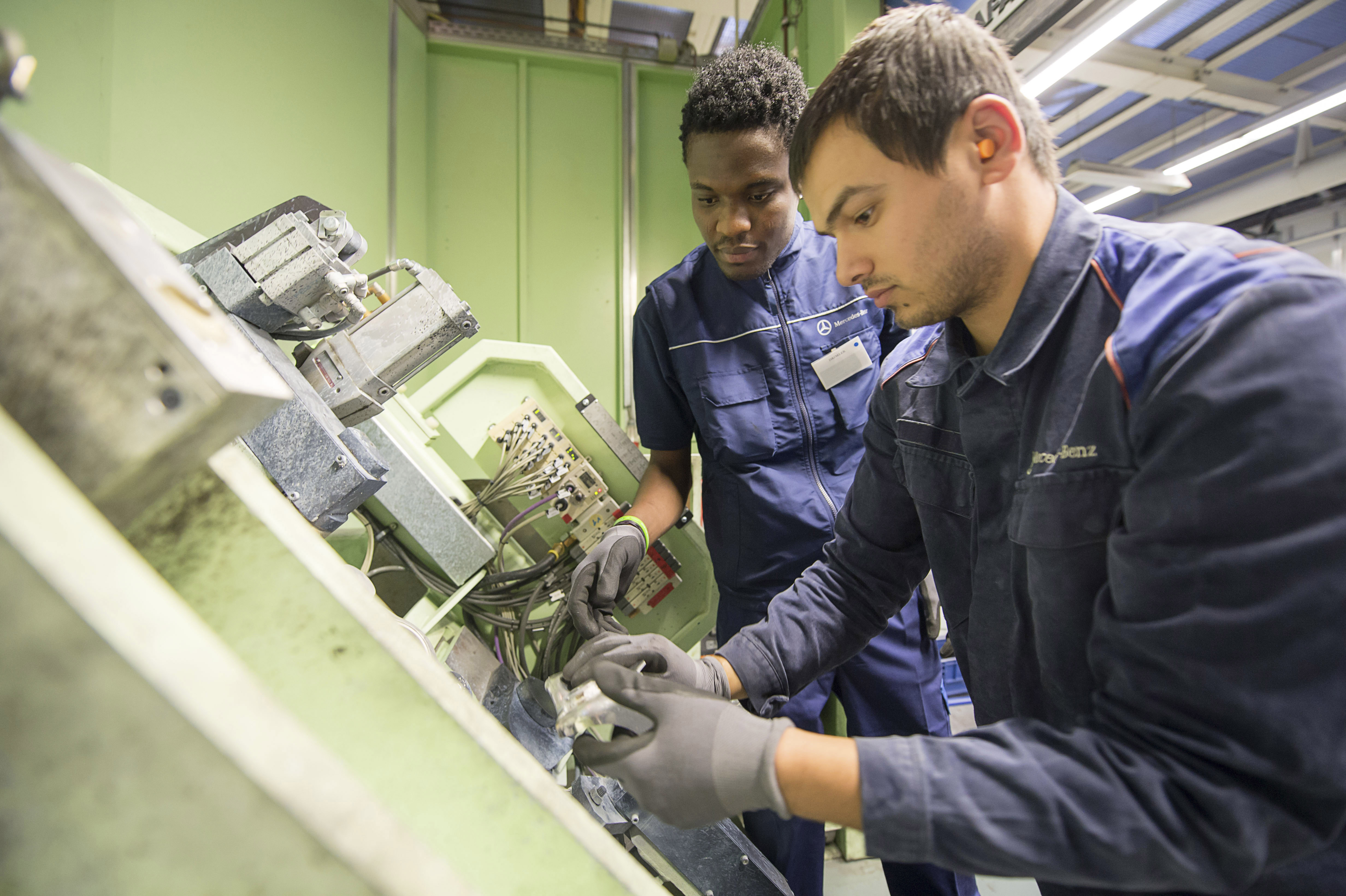 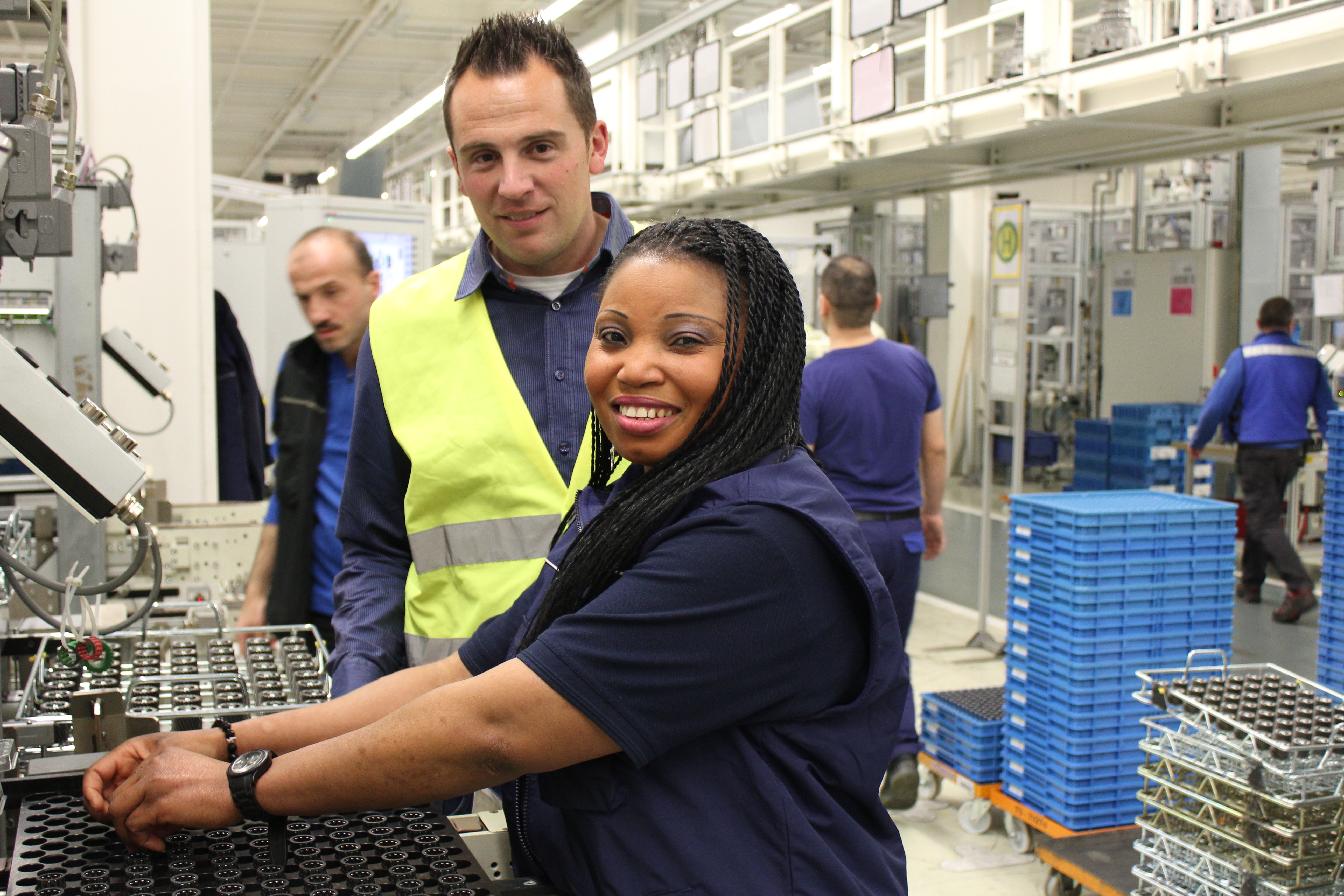 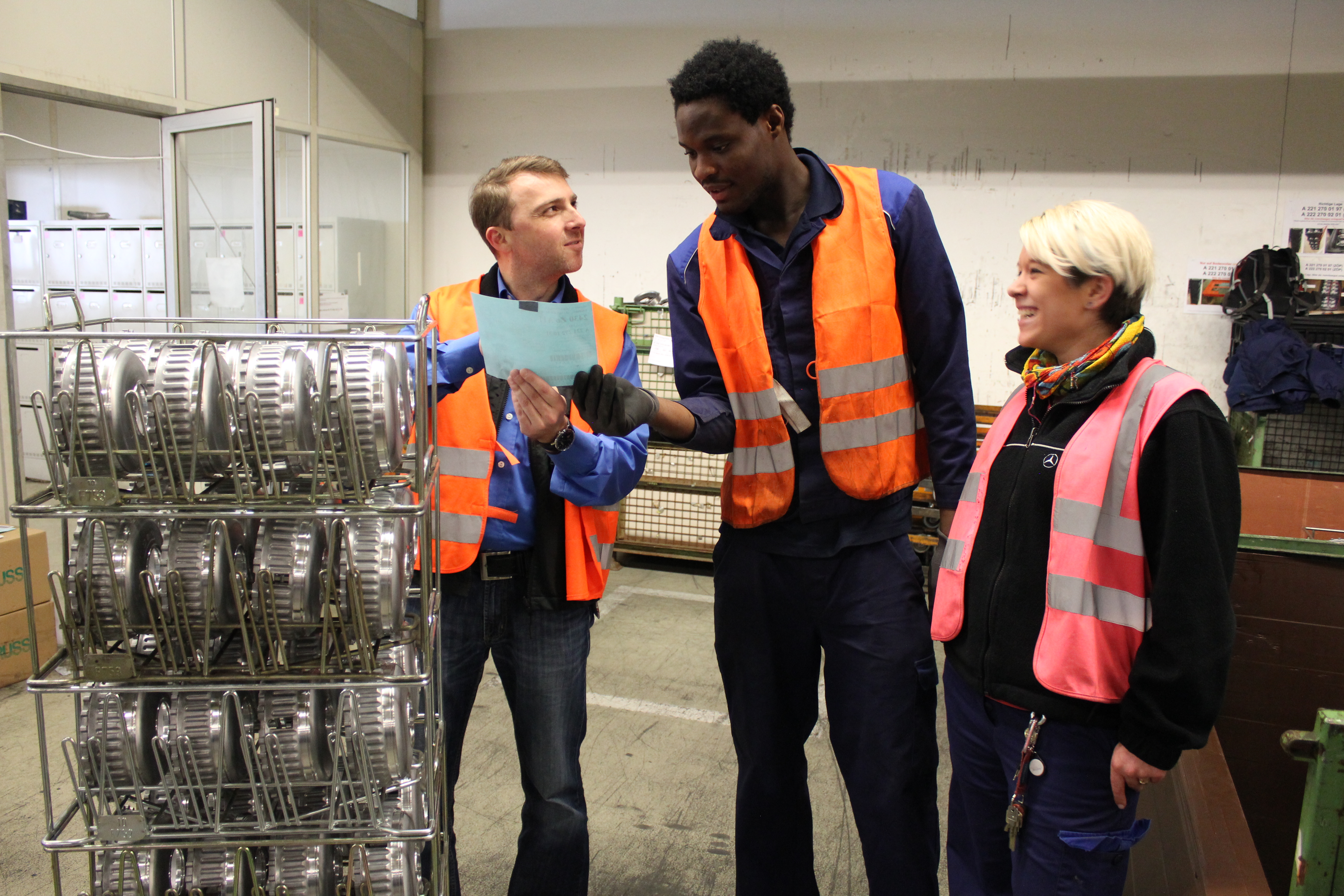