Energy Solutions from the Think Tank

More and more people live in cities, and their consumption of energy is growing. Technical University of Munich professor Thomas Auer and his students are looking for ways of encouraging people to save energy without impairing their quality of life. Smart buildings like the new Siemens HQ in Munich show what can be done.

The glass facade of the fifth floor of the Technical University of Munich (TUM) building gives Professor Thomas Auer a great view of the city, but not necessarily a clear insight into the future of sustainable building technology. The 1960s edifice in which Auer and his students are researching the buildings of tomorrow was renovated only a few years ago. “You just get the bare essentials: lights on, lights off, open windows, close windows,” Auer notes with a smile. He adds: “With public buildings, there are certain financial constraints. Nevertheless, they still manage to offer a high degree of user comfort.”

Since 2014, the 51-year-old professor has headed TUM’s ClimaDesign master’s program, attracting architects and engineers from all over the world in their search for integrated solutions to create the climate-friendly buildings of the future. Around the globe, politicians, urban planners, architects, and engineers face the same two problems: more people are moving to cities, and they’re using more and more energy.

Auer’s students are highly imaginative, but practical-minded engineers and architects, and they come from around the world – from places as diverse as Bavaria, Lebanon, India, and Chile. Today, they are gathered around the interactive whiteboard in the seminar room to discuss their responses to these challenges. Auer attracts students because he’s a practical, hands-on process engineer and visionary rolled into one. His company, Transsolar, came up with the energy design in the master plan for the desert city of Masdar in Abu Dhabi, and built one of the most energy-efficient office buildings in North America, the headquarters of Manitoba Hydro in Winnipeg.

Engineers and architects from all over the world
John Thomas, a 26-year-old electrical engineer from India, has spent several years in Oman working on building automation at the new airport. “They use huge cooling units that consume incredible amounts of energy. This is because they planned the building first and only then asked the engineers to find a way of cooling it,” he explains. It was then that Thomas understood that architects and engineers have to work together from the outset. “Working on the basis of ‘we have a problem – we need a solution’ won’t get you any anywhere.” In 2014, this realization prompted him to move to Germany to study with Auer. Thomas is working on a research project in his home country looking into ways of harnessing waste heat. In Germany, waste heat recovery is a big issue. But in India, it doesn’t make sense to recover heat for heating purposes. Instead, Thomas is thinking about waste cooling with the help of heat exchangers. He foresees a construction boom in India in the next ten or twenty years. “But so far, only foreign companies have given any thought to energy efficiency,” he says with regret. That’s about to change.

Bashar al-Dwaik, a 30-year-old engineer from Beirut, on the other hand, sees his future in Germany. Naturally, he admits, there are opportunities in Lebanon, especially in solar energy. “But the issue is far down on the government’s agenda,” he says with a hint of resignation. After six years working as an engineer in the oil and gas industry, he didn’t find it easy working with architects, who have a reputation for being somewhat head-in-the-clouds. But he also understands: “This kind of collaboration opens up new horizons.”

Stefan Gailer, a 34-year-old architect from Munich, is one of the few Germans studying on the ClimaDesign program. He’s looking into gray energy, the energy embedded in the building material itself. His work involves studying the aging courthouse in the Bavarian city of Dachau to work out general parameters for deciding when it makes sense to renovate a building, and when it’s better to rebuild it from scratch.

Siemens: showcasing smart building
Less than five minutes from Auer’s “think tank,” Siemens is doing both these things at the same time, setting new standards in terms of smart buildings and sustainable architecture. On the one hand, the new corporate headquarters on Wittelsbacherplatz is being built from scratch, but the existing Palais Ludwig Ferdinand is being incorporated into the new building. Auer also had a hand in this, being responsible for the energy planning for the new HQ.

To meet the “nearly zero-energy building” standard, in addition to familiar methods such as using photovoltaics and rainwater, architects and engineers have come up with a host of innovative solutions: the inward-facing facades, for example, are placed at an angle and are fully glazed to admit plenty of daylight into the building and the inner courtyards. This reduces the need for artificial lighting. Lighting for the building, if required, is provided by energy-saving LEDs. To optimize heating and cooling, Transsolar recommended building a geothermal heat exchanger into the foundation slab. It now has almost 70 kilometers of pipes carrying water that exchanges heat with the earth and provides buffer storage. “This has partly reduced the need for cooling towers,” explains Auer.

Saving energy by involving users
The building’s ambitious energy design is geared towards meeting the requirements for DGNB and LEED Platinum certification. It has resulted in huge improvements in the annual energy footprint: the new building will emit only nine kilograms of CO2 per square meter per year, 90 percent less than the old building. Primary energy use will also be reduced by 88.5 percent to 40 kWh. The building thus anticipates Siemens’ strategy of halving the organization’s net CO2 emissions by 2020 and reducing them to zero by 2030 – a great example of ingenuity for life. 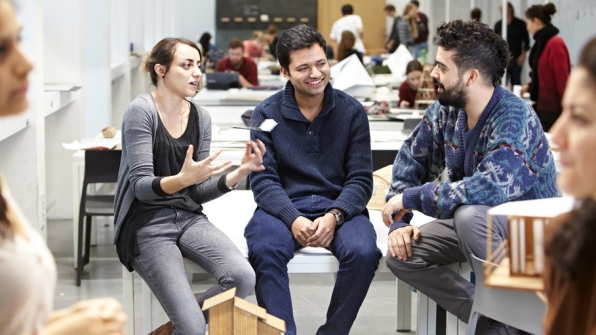 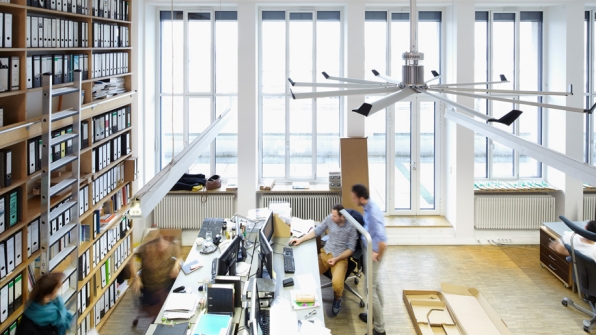 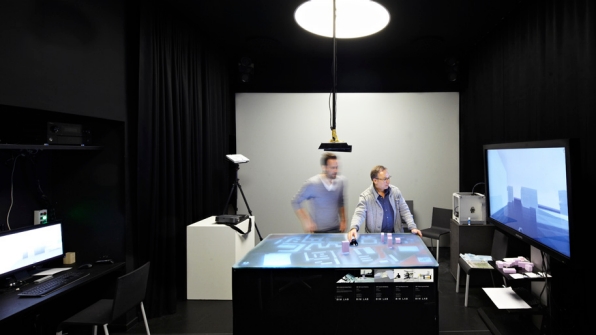 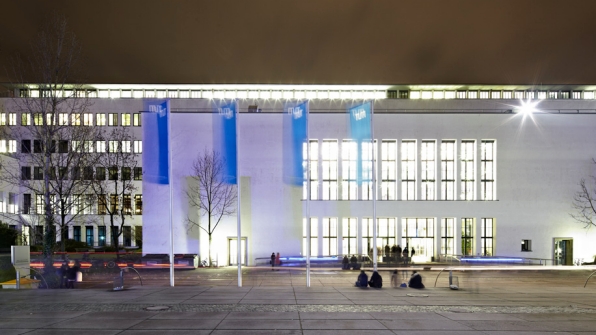 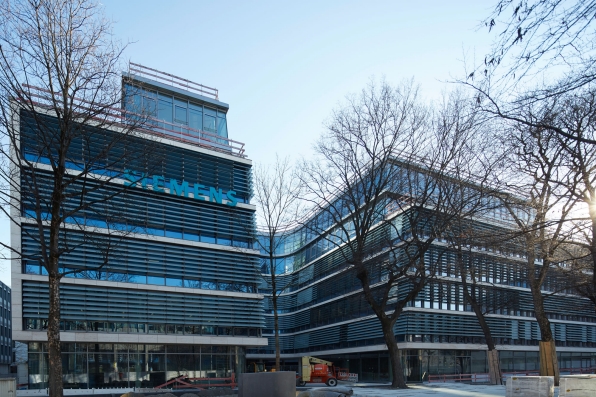