Daimler is entering the business of stationary energy storage technology. The energy storage units from Mercedes-Benz, which could help drive the development of renewable energy systems in the future, are already making electromobility greener and more economical today.

Article
As featured in the Mercedes-Benz Sustainability Magazine 365

According to the Intergovernmental Panel on Climate Change (IPCC), renewable energy sources could account for more than 70 percent of the global energy supply by 2050. The figure may be based on optimistic assumptions, but one thing is clear: Our future energy supply will come from renewable resources. However, several obstacles need to be overcome before we get to that point. One of them involves the fact that the sun and wind are sometimes available in abundance, but at other times not at all, which means solar and wind power often needs to be stored. Researchers around the world are therefore working on the development of energy storage technologies. Stationary battery storage units offer one possible solution here. Up until now, such systems have mainly been used for small-scale power generation systems. However, Mercedes-Benz is currently building two large energy storage units in Lünen and Hanover that can do a lot more. The innovative units, which consist of electric-vehicle batteries, are capable of balancing out grid fluctuations with virtually no losses, which means they can help accelerate the transition to a renewable energy supply. They also contribute to lowering the cost and improving the environmental balance of electric mobility.

ELECTRIC MOBILITY THOUGHT THROUGH TO THE END
Daimler began building a completely new type of battery storage unit in the German city of Lünen in November 2015. The unit, which is located at a site run by the Remondis recycling company, will combine a number of old batteries from electric smart models to achieve a total storage capacity of 13 megawatt-hours, thus making it the biggest second-use battery storage unit in the world. After being put through their paces in vehicles, the batteries will be used here again under less demanding conditions. Daimler is building the large storage unit with three partners. The Daimler subsidiary Deutsche ACCUMOTIVE is working alongside Remondis, The Mobility House — a company specializing in charging and storage solutions — and the GETEC energy services company. The interesting thing here is that the partners together cover virtually the entire value and utilization chain for battery systems — from the production of batteries at ACCUMOTIVE and their use by Mercedes-Benz in electric and plug-in hybrid vehicles to the marketing of stationary battery storage units by The Mobility House and GETEC, and the recycling of batteries and the reintroduction of valuable raw materials to the production cycle, for which REMONDIS is responsible. In line with this holistic approach, the partners created a bold motto for their project: “Electric mobility thought through to the end.” At the moment, the “active” life of a battery in an electric or hybrid vehicle from Mercedes-Benz generally lasts for about ten years, after which the batteries are usually no longer able to deliver their full output. The normal procedure here up until now has been to recycle the valuable raw materials the batteries contain.

The new second-use battery storage unit, on the other hand, gives the old batteries a new life, as stationary battery operation is less demanding than operation on the road, which means the batteries can be utilized fully for at least another ten years. The advantages here are clear because second-use battery storage units more or less double the economic utility of the expensive and valuable lithium-ion batteries. They also offer huge potential in terms of the transition to a renewable energy system, especially in Germany. According to a recent study conducted by the German Renewable Energy Federation and Hannover Messe, Germany could have a grid-connected storage capacity of just under 25 gigawatt-hours from decommissioned electric-vehicle batteries by 2025 if, as planned, a million electric cars are put on the road by 2020. That would be enough to supply the entire country with electricity for 30 minutes.

ELECTRICITY FROM THE SPARE PARTS WAREHOUSE
The second-use battery storage unit in Lünen is not the only major project being conducted by Daimler in this area. The company is also now building a storage unit in Hanover that is based on a concept that is every bit as promising. Here, 3,000 brand-new replacement battery modules that are meant for use in smart electric drive vehicles will help stabilize the power grid in Hanover in the future. The principle is quite simple: Instead of simply stacking the batteries in a high-bay warehouse, Mercedes-Benz will combine them to create an XXL stationary storage unit. Plans call for this active battery spare parts storage facility to go online before the year is out. This project, which is like no other anywhere in the world, is being conducted by Daimler, Deutsche ACCUMOTIVE, and the Enercity grid operator (Stadtwerke Hannover — Hanover’s municipal utility company). With a total storage capacity of 15 megawatt-hours, the facility will be one of the largest of its kind in Europe. The project partners plan to market its storage capacity on the German market for balancing power. The unit will help compensate for fluctuations in the amount of energy generated and fed in by renewable sources and thus also help stabilize the mains frequency — a task that is usually carried out today by fossil-fuel power plants.A highly desirable side effect here is that the use of batteries as energy storage units will also help make electromobility more cost-effective, which in turn will promote the further application of this technology. In this sense, the battery storage units will also help Germany and other countries achieve international climate protection goals.

BATTERY FITNESS
The innovative concept is also good for batteries because a high degree of battery reliability can only be achieved if a battery is regularly and carefully charged and discharged while being stored. Without such charge-discharge cycling, a deep discharge can occur, which could make the battery unusable. Keeping such batteries “healthy” in a conventional warehouse is thus an expensive undertaking. In the new large storage unit, however, the grid’s fluctuating need for balancing power continually charges and discharges the batteries. Unlike the case in vehicles, the charging and discharging process here is slow and easy on the battery. An effective battery management system ensures consistently optimal temperatures and charging states. These are ideal conditions for the batteries, keeping them fit, and preventing battery aging.

STORED ENERGY FOR THE HOME
Stationary energy storage units are no longer anything new for Daimler. Back in 2015, the first industrial-scale Mercedes-Benz lithium-ion storage unit went online in Kamenz, Germany with an initial capacity of 500 kilowatthours. Daimler is now in the process of gradually expanding that capacity to 3,000 kilowatt-hours. However, battery storage units from Mercedes-Benz will also be used in small companies and private homes in the future, for example, to buffer consumption peaks in workshops and supermarkets. What’s more, those who install a photovoltaic system on their roof can use a Mercedes-Benz energy storage unit to temporarily store surplus electricity and thus make themselves less dependent on external suppliers. Up to eight battery modules, each with a capacityof 2.5 kilowatt-hours, can be combined here to create a home energy storage unit with a total capacity of 20 kilowatt-hours. This concept has proved to be successful, and more and more customers both inside and outside of Germany have expressed interest in the home energy storage units with the star, which have been available since April 2016. Mercedes-Benz also plans to further expand its activities with Deutsche ACCUMOTIVE. For example, a second battery factory will go into operation in Kamenz in 2017. This will make customers happy, strengthen the location, and help improve the German energy sector in a big way. 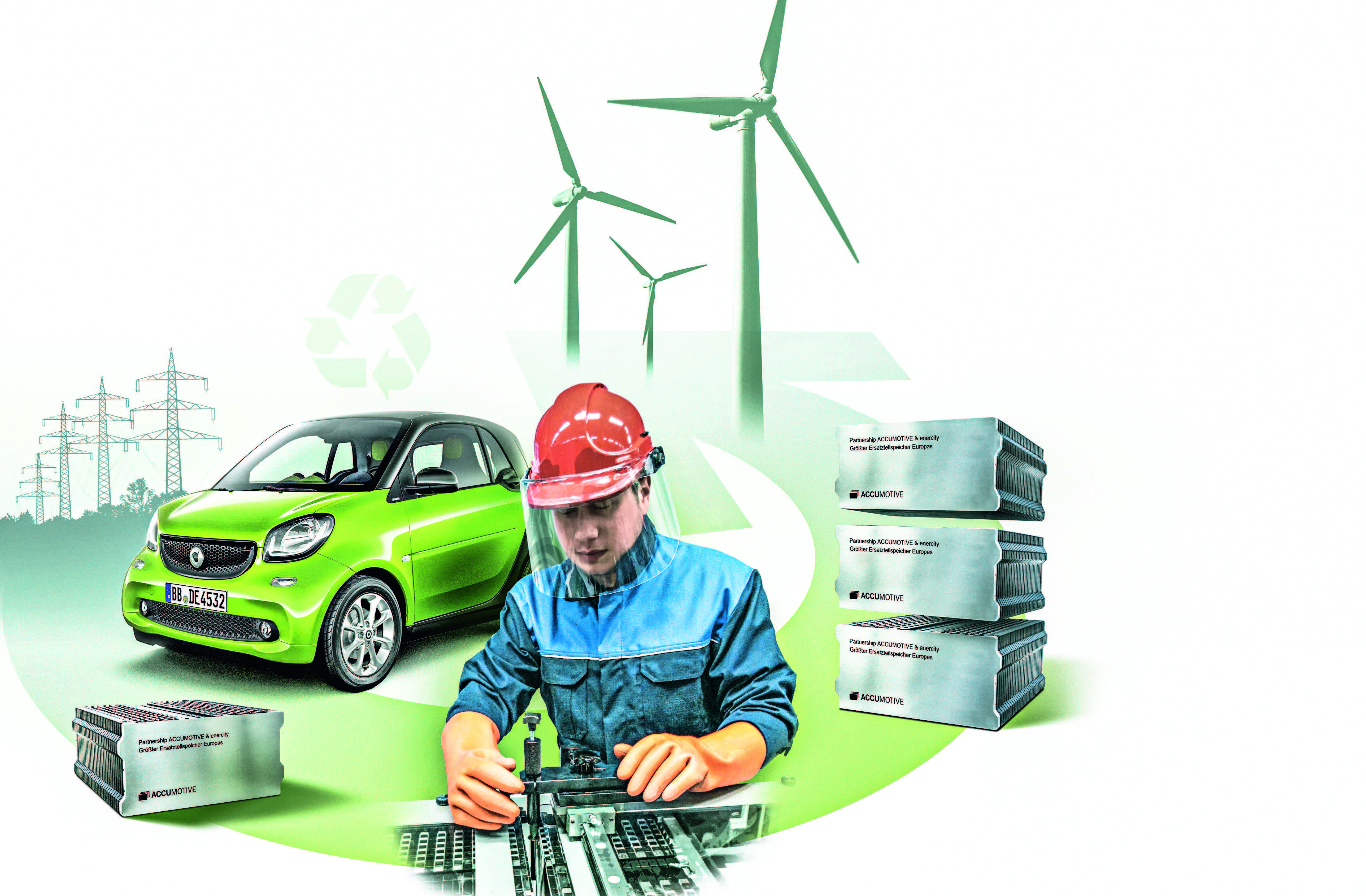