Siemens Takes a Look into the Future of Electrical Power

The way power is generated and distributed is set to change fundamentally all over the world. However, even experts don’t know exactly how distributed power systems will be structured in the future. Researchers at Siemens and RWTH Aachen University are therefore simulating possible future energy systems on the basis of millions of diverse data sets. In this manner, they are creating digital “twins” of future energy-system structures in a project that is unlike any other in the world.

Article
Pictures of the Future: Smart Grids and Energy Storage

“I’d put my money on the sun and solar energy — what a source of power!” Thomas Alva Edison wrote enthusiastically back in 1931. Today, 85 years later, Edison would be a rich man on the basis of this prediction alone. The International Energy Agency (IEA) recently reported that photovoltaic facilities with a total output of more than 177 gigawatts are now operating all over the world. And it’s not only solar energy that’s becoming more and more important for power generation. The share of energy produced from renewable sources in general is on the rise. This was most recently demonstrated at the G7 summit in Germany and the UN Climate Change Conference in Paris.

Rapid Growth in Renewable Energy Sources
Back in 1990, renewable sources of energy accounted for only 3.4 percent of Germany’s gross electricity consumption, but by 2000 that figure had risen to 6.2 percent and in 2015 it stood at nearly 33 percent, according to Germany’s Ministry for Economic Affairs and Energy. The long-term goal of the German federal government is to increase the share of electricity produced by wind, solar, and geothermal power systems to at least 80 percent by 2050.

This ambitious goal will fundamentally change the energy systems as well as the energy markets in Germany — not only because of the expansion of solar power facilities, wind turbines, and grid infrastructures that it will lead to, but also because the increasing number of such facilities will make the overall system more decentralized and complex.

Digital Depictions of Future Energy Systems
No one can know what form tomorrow’s energy systems will take or how they will function. That’s why experts at Siemens Corporate Technology and scientists from RWTH Aachen University are simulating the structure and behavior of future energy systems and markets, as well as the demands they will have to meet. The specialists participating in this “Energy System Development Plan” (ESDP) research project are digitizing entire energy supply structures and simulating a range of scenarios. “If we want to initiate the right development projects at the right time, we need to get an idea of how energy systems and markets will change in the future in order to meet new technical and economic requirements,” says Prof. Armin Schnettler, Head of Research in Energy & Electronics at Siemens Corporate Technology.

Millions of Data Sets
ESDP experts are utilizing huge amounts of data to produce their simulations. “This includes everything from Federal Statistical Office data concerning the population and population density of Germany to data from businesses and industry and their energy requirements, as well as specific technical power-plant data,” says Simon Koopmann, the ESDP project manager at RWTH. The results of an extensive study conducted by Prognos, a consulting company that specializes in future-oriented business and social trends, are also being used for the analysis. These sources have led to the creation of a huge database with approximately 20 million entries pertaining to buildings, some two million entries covering commercial business operations, and around 60,000 individual data sets from industrial plants containing information about hourly electricity and heat load profiles.

Simulating Scenarios
Project researchers from Siemens and RWTH are using all of this data to simulate three different scenarios for future energy systems. The first scenario is based on the assumption that energy from renewable sources will account for 80 percent of German electricity production in 2050. In the second scenario, the researchers additionally assume that the use of battery storage systems will increase sharply in households that have their own photovoltaic systems. The third scenario explores the ways in which the energy system might change between now and 2025 if the number of power plants using natural gas increases significantly and the number of lignite-fired plants declines to nearly zero. The simulations are based on complex algorithms that make it possible to identify exactly those technologies that would fit in with each of the three scenarios.

“However, the modeling environment we have created can ultimately be used to simulate a large number of entirely different scenarios,” Koopmann explains. The main requirement for that is the ability to make effective calculations with the same database. To this end, researchers have combined individual energy-generation units into 360 virtual power plants, which are known as energy cells. This makes it possible for the ESDP project team to depict a future energy system with such a high level of geographical granularity that individual streets can be depicted.

Reducing Uncertainties
As their simulations evolve, the project’s researchers are creating digital representations of likely future energy supply systems. “We are trying to depict the future in as representative a manner as possible by creating a large number of scenarios,” Schnettler explains. The better certain technologies fit together with various virtual scenarios, the more likely it is that they will be used in real solutions in the future. “We’re trying to minimize the uncertainties associated with development decisions and to focus our research activities on the right areas,” says Schnettler. The aim is not only to identify the right technologies but also to anticipate associated business models.

Unique Approach to Simulation
Founded in August, 2014, the ESDP project team has focused on the German energy market since it is not only very transparent, but also closely integrated into the European energy system. The project’s experts also know more about the German market than any other energy market. But, says Schnettler, “The German energy market can serve as a model for the rest of the world. That’s why our focus on Germany makes sense, as it will enable us to apply our methods and the knowledge we gain to the world’s energy markets.”

The ESDP scenarios are the first ones to take into account not only power generation, transmission, and distribution but also changes in energy market design and the probable interactions resulting from such changes. The project’s simulations also take into account factors such as electricity supplies, heating, cooling, and gas requirements — in short, all the aspects of a multimodal system.

“Our incorporation of decentralized facilities such as photovoltaic systems, wind turbines, heat pumps, and electricity storage units from both a technical and a market-development point of view represents a new approach,” says Schnettler. “You won’t find a more comprehensive simulation model for energy systems anywhere else in the world.” That’s because traditional simulations of energy systems have focused on producing detailed models of energy markets and large power plants. “Previous simulations have not taken into account decentralized units and energy feeds from renewable sources as active components of the energy system,” says Koopmann. And therein lies the unique value of Siemens’ approach to simulation. After all, such elements are expected to represent an ever-growing percentage of the total energy mix. 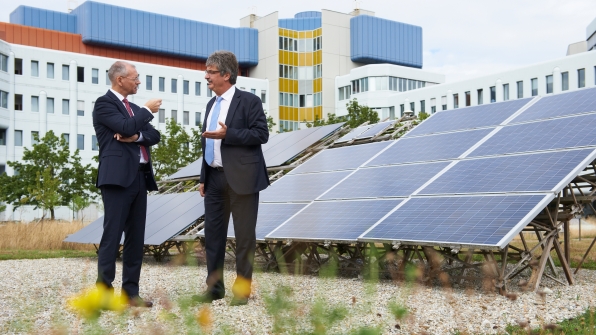 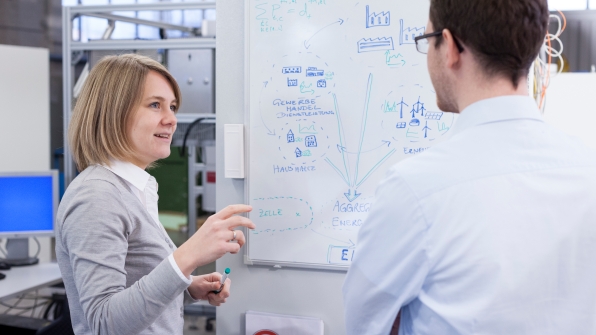