The moovel mobility app can be used to combine, book, and pay for different modes of transport as needed, making travel easy and convenient.
Jul 19, 2016 8:00 AM ET
Tweet This:
As more and more people travel multimodal, @Daimler_News looks at the @mooveltransit #mobility app http://bit.ly/29LyhBN
Article
As featured in the Mercedes-Benz Sustainability Magazine 365

Monday, 7:50 a.m.: Hamburg, Eimsbüttel: David O. says a quick good-bye to his wife and two children and runs down the steps and out onto the street, closing the door behind him. What a morning — and he’s probably not going to be able to find a car2go vehicle to rent during rush hour. He walks down to the nearby Christuskirche church, takes out his smartphone, and sees that there really is no car2go vehicle available. He therefore decides to use public transport. moovel tells him that the next U2 subway train will be leaving in four minutes. He sees that he will have to transfer trains once and will then arrive at his offi ce in the Speicherstadt district of Hamburg in just over half an hour. One or two clicks with the moovel app is all it takes to buy his ticket, after which he puts his phone back into his pocket. The train pulls into the subway station just as David O. is rushing down the stairs. Maybe it will be a good day after all. His colleague Tina H. is waiting for him at the office. They need to discuss the project from last week before they head to Berlin for a meeting with a customer. The trip will be a little tight but doable: moovel suggests the ICE high-speed train leaving Hamburg central station at 10:36 a.m. They can take the U4 subway to the station at 10:15. However, it’s now started to rain, so they use the moovel app to book a mytaxi. The ICE is on time and they arrive in Berlin at 12:15, which gives them time for a sandwich and an espresso before the meeting begins at 1:00 p.m.

More and more people are traveling “multimodal” like David O. these days. They use carsharing programs, switch on the fly between public transport, rental bikes, buses, and subways, and call a taxi if need be, making it easy for them to quickly get from A to B. All of this is made possible by intelligent apps such as moovel that provide everything you need to make multimodal travel convenient and flexible — and accessible from a smartphone or tablet. Once users register with moovel, they can access information on all available transport options from any place and at any time — everything from local public transport systems to rental bikes and taxis. Depending on user preferences, moovel suggests the fastest, least expensive, or most convenient route. The app can be used to book key modes of transport — and to pay electronically. Such mobile payments for single-ride, day, and group tickets have been possible in the Hamburg public transport system — including the harbor ferries — since April 2016. The whole system is extremely easy and convenient for customers, whose numbers are steadily rising. Moovel users are also incidentally ensuring more effective use of existing resources and improving traffic conditions and transport capacity utilization in major metropolitan areas. By combining today’s transport modes with new, flexible mobility services, mobility platforms such as moovel are already offering a preview of how future mobility systems could, and will have to look: intelligent, networked, efficient, and sustainable.

David O. is 35 years old, well educated, dedicated to his job, and a passionate city-dweller, which makes him a typical representative of that group of people today who want to be  mobile but don’t necessarily want to own a car. Just over a year ago he got rid of his car and began using moovel and the car2go flexible carsharing system — and he hasn’t regretted a thing since then. He enjoys his new flexibility and he’s also convinced that he’s financially better off as a result. More and more people are now deciding to share things that they don’t constantly need rather than buy them. For example, if your parking space remains empty the whole day during the week, why not make it available to someone who needs it? A drill or jumper cables that are hardly ever used can also be shared with others. The Internet and easy-to-use apps make it easier for people who need things to fi nd people who want to share things, and vice versa. Researchers believe this emerging “Sharing Economy” is more than just a passing phase. Instead, they think it might noticeably change the way we do business over the medium term — and also the way we move around.

It’s now 4:15 p.m. David O. and Tina H. have ended their presentation in Berlin. Everything has gone well and they will probably get the contract. moovel tells them that the next ICE to Hamburg will leave in about 25 minutes, so they should be able to catch that train. They decide to walk the short distance to Berlin central station. The ICE is on time once again.

While they’re on the train, they receive a text message from a colleague. His wife had a baby that morning and he’s invited everyone in his team for a drink in Bar Le Lion near City Hall at 6:30 p.m. David O. was actually planning on going to the gym, but he doesn’t mind canceling that to celebrate such a happy occasion. Tina H. has already reserved a car2go at Hamburg central station and promises to drive him home after the get-together. That means he’ll be able to put the kids to bed and then spend a relaxing evening with his wife. It turned out to be a very good day after all. 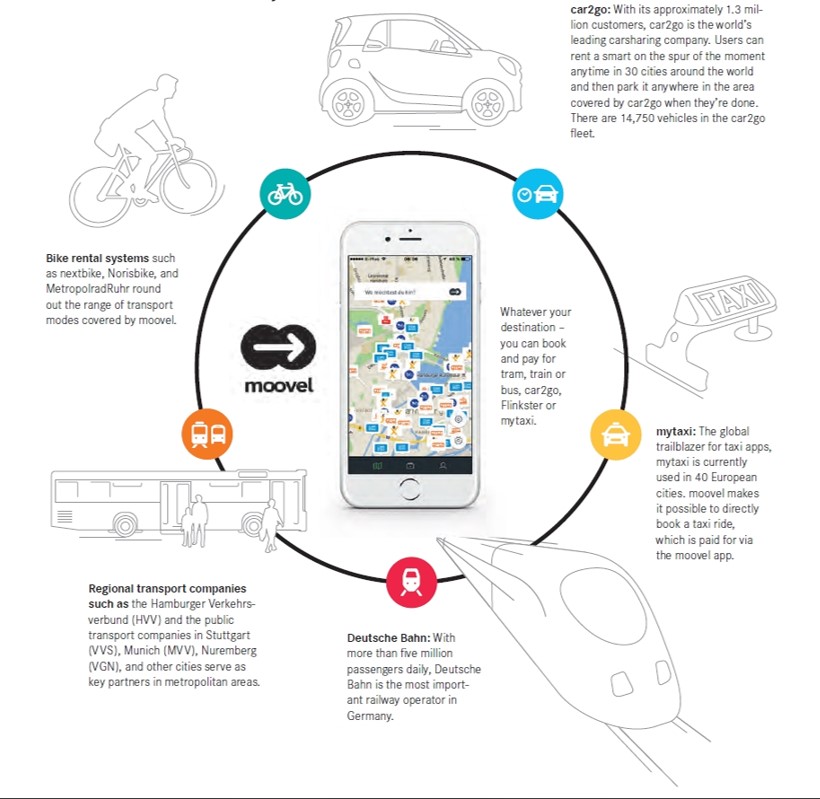