There are 795 million people suffering from chronic hunger around the world according to the United Nations World Food Programme (WFP).  This means that one in nine people globally, many of whom are children, are going to bed hungry each night.  As one of the world’s largest restaurant companies, Yum! Brands believes it is their privilege and responsibility to address the global hunger issue.

During this hour-long Twitter Chat, we’ll take an in-depth look at Yum! Brands’ World Hunger Relief effort, which is the world’s largest private sector hunger relief initiative, spanning more than 125 countries, over 41,000 KFC, Pizza Hut and Taco Bell restaurants and 1.5 million associates. We will hear from their largest World Hunger Relief partner, WFP, on the success this initiative has achieved since 2007 by raising awareness, volunteerism and funds to help create a world with zero hunger.

Yum! Brands also addresses hunger in the U.S. through its Harvest program. Since 1992, the Food Donation Connection (FDC) has coordinated the donation of more than 176 million pounds of the Company’s food to over 3,000 nonprofit organizations – a fair market value of nearly $820 million.  Since its launch over two decades ago, Yum! Harvest has become the largest prepared-food donation program in the world. Hear from the FDC on how they are teaming together with the Company to expand the Harvest program globally.

As we prepare for World Food Day on October 16th, we know the need to fight global hunger is as important as ever.

During #3pYumChat, we will address the following topics, and more:

Bring your questions for our guests, and they’ll answer as many as they can during the chat!

WHEN: Thursday, October 15th at 9am PST / Noon EST
WHERE: Join the conversation on Twitter at #3pYumChat.

Have a question for the panel? Send it to nick@triplepundit.com or tweet @TriplePundit! 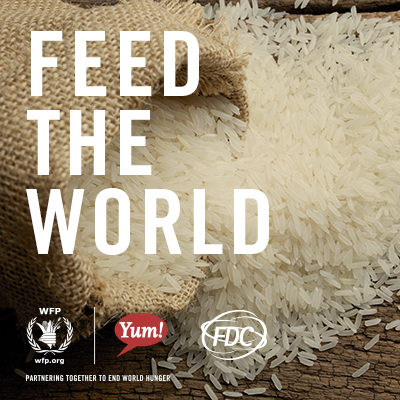