by MICHAEL A. MADALENA, Guest Essayist

After graduating from high school in Williamson, Wayne County, I did combat tours with the U.S. Marine Corps in Afghanistan and Iraq. But like the thousands of other vets returning to upstate New York, I was left wondering what to do next. Where could I put my military training to best use? How could I continue giving back to the country that I love?

I found my answers in an unexpected place. I had been working on degrees in Natural Resource Conservation and Law Enforcement at Finger Lakes Community College in Hopewell, Ontario County, when a friend told me about the Veterans Fire Corps. The Corps is a 90-day training program conducted by the nonprofit Student Conservation Association in partnership with the U.S. Forest Service. SCA, the nation’s largest conservation service organization for young adults, developed the initiative to combine its conservation expertise with the needs and skills of young returning veterans.

The program gave me the direction and purpose I had been missing. As a rifleman in the Marines serving with 3/3 Kilo Company, I faced deadly foes overseas. The enemy that the men and women in my veterans fire crew now face is no less lethal, namely the more than 32,000 wildfires that have plagued our country this year.

During my tenure with the Veterans Fire Corps, I’ve been stationed in Coconino National Forest and elsewhere in Arizona, as well as in the Black Hills of South Dakota and Bighorn National Forest in Wyoming. But we don’t only operate out west. Last year, after Hurricane Sandy battered the East Coast, my Arizona crew volunteered for the cleanup and recovery efforts in New York and New Jersey. We went from town to town using our forest management skills to remove trees, open roads and clear channels so supplies could reach the hardest hit communities. Making this kind of impact is exactly why I joined the Veterans Fire Corps. 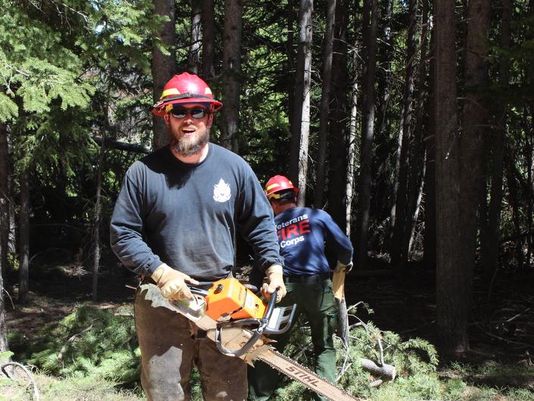