When the riders of Team Sky made their American cycling debut at the Amgen Tour of California last year, they seized the opportunity to engage and inspire cycling fans in the U.S., just as they had done so successfully in the U.K. This year, the team returns to California as the reigning champions, and they are expanding on their initial mission to engage American cycling fans in a number of new ways.

On Wednesday, May 6, Team Sky riders Ian Boswell and Danny Pate, along with Jenny Taft of FOX Sports, will host the SoulCycle | Team Sky Pro Challenge, a high energy class at SoulCycle Beverly Hills to benefit the Boys & Girls Clubs of America. 100% of the proceeds go toward BGCA's health and wellness programs, and 21st Century Fox will double match all donations. The class is open to the public and is accepting registrations here.

These initiatives are the latest in a long line of pro-social efforts from Team Sky, which has organized its outreach efforts under the motto "Inspiration to Participation" since its formation in 2009. Team Sky's Sky Rides began in 2009 as an event to encourage fans to join in the fun of cycling and introduce regular exercise to their routines. Fans could participate in a special traffic-free bike ride on a 15 kilometer route through London. An outstanding 65,000 people participated, and the event has only grown in popularity since then, now including several partner rides throughout the UK every year. Team Sky estimates that programs like these have inspired more than 1.3 million people in the UK to take up regular cycling.

21st Century Fox is a proud sponsor of Team Sky and is excited to welcome the team to the LA community. 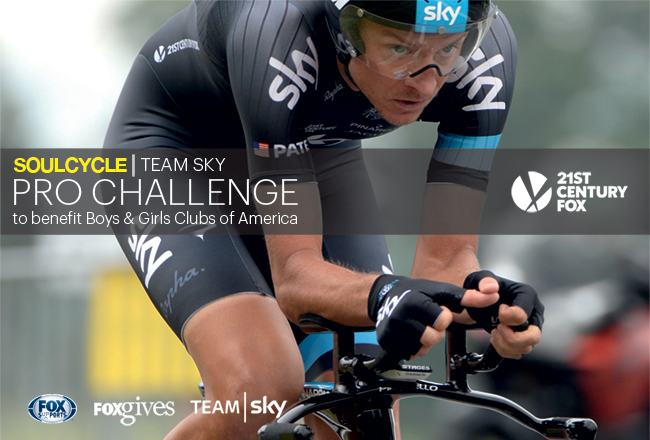