After the Cyclone: The Logistics of Relief

Editor’s note: The UPS Foundation announced that it will contribute $500,000 to assist in the humanitarian response to the earthquake in Nepal. The contribution will help get urgent relief supplies to Nepal and provide on-the-ground logistics support for long-term recovery needs. In 2014, The UPS Foundation’s Humanitarian Relief & Resilience Program supported more than 263 humanitarian relief shipments across 43 countries. Below is the first-person account of a UPSer who helped out in a crisis.

When Cyclone Pam hit the South Pacific Ocean island nation of Vanuatu in spring 2015, early reports were grim. After two days of violent, hurricane-force winds and torrential rain, 166,000 people on 22 islands of Vanuatu had been impacted; 90 percent of people sustained significant damage to their homes.

Residents had no access to power. 110,000 people had no or very limited access to fresh drinking water. In a place where many rely on subsistence farming and fishing for food, gardens were destroyed and many fishing boats lost.

The Vanuatu government, the international humanitarian community, the UN, and the French, New Zealand, and Australian military responded quickly. Within days officials raised fears of a “second disaster” as early assessments showed that the most vulnerable communities in impacted areas would soon run out of drinking water and food.

In response, The Salvation Army deployed a small team. Early UN reports said logistics would be the biggest challenge in the aid effort as many of the islands have only very small runaways (some don’t even have an airstrip), and even when aid could be delivered to air fields, villages are spread out along very difficult to reach coastal areas nowhere near airfields. I was asked by the Salvation Army to accompany their team to work on logistics.

In late March, after 24 hours in Port Vila, the capital of Vanuatu, our team agreed that Port Vila was in better shape than other areas. The Australian military was flying in from an airbase near Brisbane. The New Zealand forces were flying in from Auckland. The French were bringing in aid shipments from New Caledonia. We decided the way we could do the most good was to work on getting aid from Port Vila to one of the underserved areas.

The next morning, one of the local Salvation Army contacts had a visit from his cousin from their home town of Lownapaiu, a small village about a four-hour hike north of the airfield on the northwest coast of Tanna Island. He said no one from the government, or any aid agencies had been to their village and people were living in caves and drinking “salty water.”

I decided to accompany another teammate, Michael Shiffler, and a local Salvation Army contact from Lownapaiu, Steven, to do an assessment of these areas. We traveled by plane, boat, four-wheel drive, and a five-hour hike to arrive in Lownapaiu. Conditions were even worse than described and quickly deteriorated as we hiked north. We spent one night in Lowental before heading back to report to the government and the UN.

After we delivered the assessments, the Secretary General from Tanna Island asked that the Salvation Army take the lead in providing food, water, and shelter to the 1,000 people living in these 3 villages.

Our immediate priority was to restore drinking water. Within 24 hours The UPS Foundation agreed to cover the cost of charter planes from Port Vila to Tanna. Another NGO, Liberty for the Nations, that was active in this area before the cyclone, committed to partner with us to get water in quickly. We were able to fly in 1000 bottles of drinking water and arrange a beach drop of 5000 liters from a desalinization ship.

This was a good start, but clearly not sustainable. The small charter planes meant water had to be moved in in small increments, and was simply not efficient.

Samaritan’s Purse was also active on Tanna but they hadn’t gotten to these villages yet. We asked for one of their hydrogeologists to accompany us to the village to provide water testing and help us with a strategy to restore the normal water supply.

Dr. John, affectionately known as “the water guy,” made the journey with us to a spring about 1 mile up the mountain from the Lownapaiu. The water guy confirmed the spring water was safe to drink. Water was clean and flowing, but the pipe to the village was badly damaged. Lous and Lowental source their water from a similar spring. The pipe from the spring down the mountain to a shared tank was intact and water was flowing, but the offshoots to get water north to Lowental and south Lous were non-operational.

The water guy suggested we bring 5000 meters of PVC, connectors and hardware, and work with the local village plumbers to fix the pipes. We agreed, met with the chiefs, discussed the plan, and dispatched the Salvation Army team in Port Vila to procure the pipe and materials and get in on the next ferry from Port Vila to Tanna.

Our work is not over

While we were working on the water supply on the ground in Tanna, the Port Vila team was also busy procuring rice. On April 2nd we took 5500 KGS of rice, five KMS of PVC pipe and relevant hardware off of the ferry onto a beach on Tanna Island.

The French military flew the pipe on helicopters to a soccer field in Lous. Lous is the “middle” community geographically and the field is the only appropriate landing spot in this area. The rice was divided into seven small shipments. 2200 KGS went on 4×4 trucks to Lownapaiu. The rice for the two most northern villages went up the coast in an armada of fishing boats we hired for the day.

The good news: By April 3rd Lownapaiu, Lous and Lowental had rice to sustain them for three weeks, 6300 liters of drinking water, and all the tools and materials to restore the normal water supply. But our work is not over. In fact on April 3rd, in another village on Tanna, the death of a child from starvation and severe dehydration may mark the onslaught of the “second disaster” we fought so hard to avoid.

The charter aircraft supplied by The UPS Foundation continues to help with some supplies to supplement larger ferry movements. They are also instrumental in getting key personnel from Port Vila to Tanna.

Due to the success of the operation in Lownapaiu, Lous, and Lowental, the Vanuatu government asked the Salvation Army to expand its operations on Tanna and take on additional villages. Scope and feasibility are currently being evaluated. 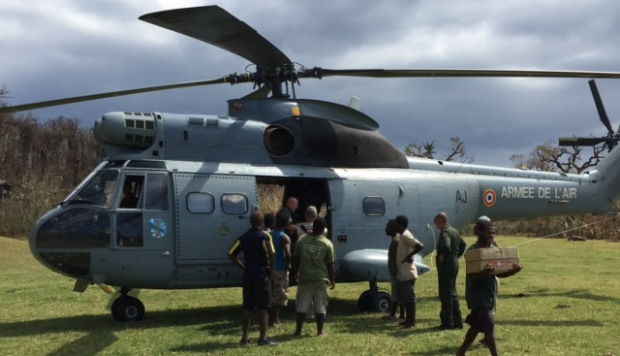