At 87, Olive Garden Server Shows All of Us How It’s Done

Oct 18, 2016 8:55 AM ET
Tweet This:
Aside from serving @OliveGarden guests, 87-yr-old “Freight Train Hazel” serves as an inspiration to her team members https://t.co/27gkwws8nC
Blog
At 87, Olive Garden Server Shows All of Us How It’s Done

Hazel Thompson, a server at the Olive Garden restaurant in Greenwood, IN, is used to good tips.  But even she was surprised when a guest she wasn’t serving walked up and put money in her hand. “I’ve been watching you, and I’ve never seen anyone work as hard as you do,” the guest said. “I know you didn’t wait on me, but I want you to have this.” Hazel, too busy then to look at the bill, was shocked when she later saw the tip was $100.

Now that may seem unlikely but Hazel is not your average server. She’s 87 — and yet she celebrated her 26th anniversary with Olive Garden in late August, delighted when her team presented her with a white cake “almost as big as a card table.”

No stranger to hard work after decades as a hog and dairy farmer, Hazel has had plenty of time to decide what kind of work she likes best. She said it’s serving guests at Olive Garden!

“I love people, and I really enjoy this work. Everybody here looks out for me, and everybody seems to love me, which means a lot.”

Hazel said her restaurant managers could not be more supportive. They make sure her tables are nearest the kitchen, so she doesn’t have to walk as far, and she doesn’t carry heavy trays anymore. Her fellow servers at Olive Garden keep a bowl of freshly grated cheese filled for her because it’s hard for her to operate the grater.

She said she has no trouble keeping up with her team members, and Host Debbie Gosman agreed. “I call her Freight Train Hazel because of how fast she scurries to the kitchen to get whatever her guests need. She is always happy to be at work, an inspiration to us all, and continues to adapt to our ever-changing technology. Plus, she is cute as a button.”

All scurrying aside, Hazel said she’s less tired after a day serving guests at Olive Garden than she was as a young farmer in Indiana and Michigan. Working alongside her husband, Robert, she milked cows, drove a tractor, plowed fields, and delivered baby pigs and calves. After a hard day outdoors, she had to cook dinner for the family – and the farmhands. “To tell you the truth, farming was pretty much a 24-hour-a-day job,” she said. “If a cow was calving, we’d have to be up in the middle of the night with her.”

At Olive Garden, Hazel works about 25 hours a week. “When people come in and dine and say, ‘This is fantastic,’ it does me good. I love to know that they appreciate our food and service.” She has her own Olive Garden favorites: Braised Beef & Tortelloni and Chicken & Shrimp Carbonara.

Hazel is proud of her three grandchildren and 11 great-grandchildren, but she has experienced more than her share of tragedy. Her husband lost his leg in 1960 in a farm accident, and the couple had to leave farm life behind. Hazel became a server in Franklin, IN.

She lives with her surviving child, Angie, “my angel,” in Greenwood. “Angie and her husband worried about me getting snowed in out in the country and wanted me to move to Greenwood and live with them. They begged me for years. One day in 1990, Angie called as a snowstorm approached and asked again. I finally agreed. An hour later, five pickup trucks pulled up out front! I asked, ‘What’s the hurry?’ She said, ‘We were afraid you’d change your mind.’ ”

Soon after, Hazel walked into the Olive Garden in Greenwood and asked for a job. Even though she had 12 years of experience as a server, “I didn’t think they would hire me because I was 61 years old,” she said.

“Even 20 years ago, when I joined the Greenwood team as a manager, Hazel was something of an anomaly,” said General Manager Greg Tuzzio. “It has been really impressive to watch her not only work as a server but excel at what she does and create the relationships she has with her guests over the years. Hazel is an essential part of our team, and we hope she will be with us much longer.”

Of Hazel’s thousands of guest encounters, one stands out, when she comforted a crying woman who had just been diagnosed with breast cancer. Hazel described her own illness to the woman and assured her there was hope. “I told her, ‘Look at me!’ ” The woman recovered and became one of Hazel’s more than a dozen regular guests.

Does she plan to put down her server’s pad and retire anytime soon? “Everybody asks me that. I keep telling them, ‘Maybe in September.’ But when September comes, I get to thinking: ‘What in the world will I do if I don’t work? I don’t want to sit at home in a rocking chair!’ 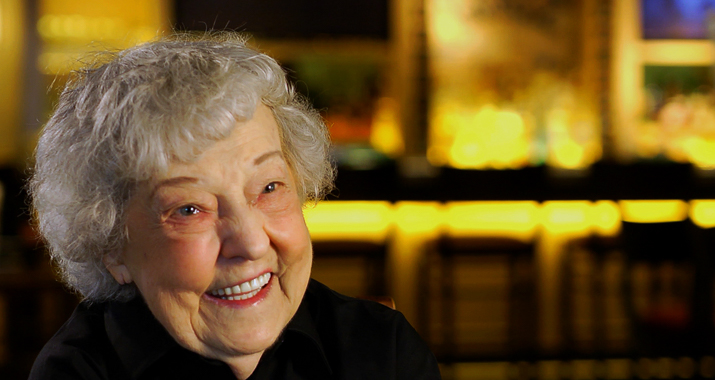