Managing risk and maintaining compliance with increasingly stringent regulations is the mantra at financial firms. In the effort to satisfy regulators, however, financial firms may be setting themselves up for a much greater risk: the one that comes when everyone in the room shares a single mindset.

That was one of the themes at a roundtable discussion for Enterprising Women in Compliance and Risk hosted by Bloomberg in London. The symposium, attended dozens of chief risk officers (CROs) and chief compliance officers (CCOs), focused on the need to diversify their functions to make sure departments are capable of seeing risks to firms from all sides.

In discussing key challenges, the group pointed to the growing complexity of regulatory regimes like the Dodd-Frank Act (DFA) in the U.S. and the Markets in Financial Instruments and Derivatives (MiFID II) in Europe—both are making the role of compliance more technical. This trend is especially true as firms begin to put in place new surveillance tools and solutions for MiFID II. As a result, firms are having greater difficulty recruiting talent with diverse backgrounds.

The discussion pointed out that CROs and CCOs tend to recruited from different areas.  Risk, which is sometimes viewed as being more of a technical role, is often recruited from the front office, while compliance officers often have more of a legal background.

Another key challenge is recruiting dedicated talent who can keep up with the changing regulatory landscape and who also work well together. A number of executives indicated that getting the right fit and keeping the team together are critical.

“With firms increasingly under regulatory pressure to make sure that they are looking at risk from all angles, how can they do that if everybody in the room is from the same background? Even when the shared attribute is that everyone has a technical background, that also exposes you to the same ‘mindset risk’,” said Bloomberg Vault Global Head of Business Development Amy Wilson, who helped organize the London roundtable. “Diversity of background is an important risk-mitigation factor and women play an especially important role in that diversity.”

Bloomberg’s Enterprising Women program brings senior women together to share business experiences and to offer them access to a broad array of topics on leadership. This is the second in a series of events that focus on the role of women in the risk and compliance function. This fall, Bloomberg will be hosting Enterprising Women events in New York and London that focus on information technology and risk. 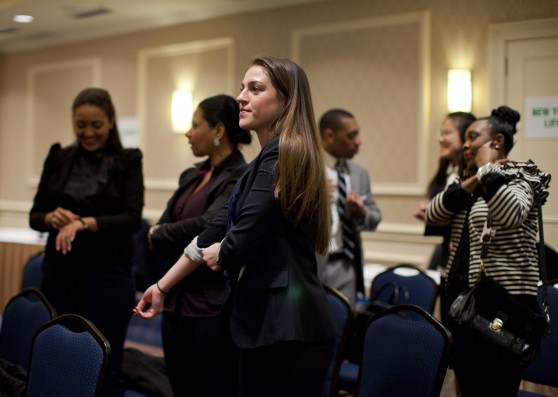