From AIAG: Why We Do What We Do

Why do long-time industry professionals like GM’s Al Hildreth volunteer their time?
Dec 15, 2014 9:55 AM ET
Tweet This:
.@GM FastLane Guest Post: From AIAG: Why We Do What We Do http://bit.ly/1BPgRtU
Blog
FastLane

We’ve all heard it said: Volunteering for your industry is one of the most important — and most needed — acts a professional will ever do. But in today’s increasingly challenging global climate, finding time is harder than ever. So why do people do it?

As our interview series continues, General Motors’ Al Hildreth, who was honored along with his colleagues on the Corporate Responsibility Summit Planning Group with a 2014 AIAG Outstanding Achievement Award, shares his perspective.

Hildreth says he gained his appreciation for our natural resources from spending summers at his uncle’s farm in northern Minnesota. The rivers there were a far cry from the sad state of the rivers and streams in the Detroit area, where the Rouge River had enough pollutants in the water to stain clothing. “It was so bad, I had to throw away my clothes after I ventured into the river,” says Hildreth. “Observing the poor quality of our waterways led me to sign up for environmental courses when I went away to college. I wanted to make a positive impact on the environment when I emerged with a degree.”

After graduation from Oakland University with a degree in engineering, Hildreth says he turned his desire to help the environment into a job helping GM boost its sustainability efforts. While working for a company that designed and manufactured air pollution control equipment, he did some testing at a GM foundry and elsewhere at a hazardous waste incinerator. The foundry was his first exposure to the automaker, which eventually led to a job.

AIAG: Please tell us about your background in the automotive industry and your current role and responsibilities at General Motors.

Hildreth: I worked for GM for 35 years in facilities, starting as a plant engineer at a foundry, then as an environmental engineer for 10 years in Spring Hill, TN. I’ve been in Global Facilities for the last 18 years working on energy. In the 1970s, the environmental engineering career path existed, but it was still in its infancy. As it expanded, I saw more ways I could insert my expertise.This led to assignments in Korea and Europe working with counterparts there to develop regional best practices for carbon and energy management within GM. I’m currently GM’s global energy manager working on greenhouse gas, energy, and water reduction as well as reporting.

AIAG: How did your work evolve into your current involvement with AIAG’s corporate responsibility team?

Hildreth: When I returned from my international assignments in 2010, I was asked to participate on AIAG’s GHG workgroup. Since I wanted some external networking related to supply chain GHG reporting, as it was now my responsibility, I joined the group.

AIAG: Tell us about someone (mentor, sponsor, friend, hero) who affected your sustainability journey, and how.

Hildreth: When I worked at Saturn Corp., our director of facilities, the late David Skiven, instilled in us to always consider protecting the environment. It was refreshing to have company values so well aligned with my own.

AIAG: What is the best advice you have ever received?

Hildreth: Always act with integrity, regardless of whoever is watching, and you never have to worry about sleeping at night.

AIAG: Can you share a recent accomplishment you are especially proud of?

Hildreth: GM has been an Energy Star® partner for 19 years, and we were awarded the ENERGY STAR® Partner of the Year Award for the last three years. We also helped more than half of GM’s manufacturing facilities to meet the U.S. Environmental Protection Agency’s ENERGY STAR Challenge for Industry.

In 2013, after reporting our carbon emissions to the Carbon Disclosure Project (CDP), we were included in their disclosure leadership index. It all comes back to the company’s overall sustainability efforts, which means balancing our actions across three pillars: economy, environment, and society. When one of those legs in the three-legged stool is not in balance, the entire idea falls apart. Regularly working with NGOs, suppliers, and customers has been beneficial, and those conversations bring a fresh new perspective on the state of the entire value chain. GM doesn’t work on an island. We need involvement from all parties to ensure we maximize our investment in the environment. With the population expanding, environmental sustainability will become essential for our survival, not just a popular business ethic.

I’m also proud of my team. By working on a global scale, we are able to save money for GM through carbon, energy, and water conservation projects. We discover and share all of the best practices globally, and since the company spends more than $1 billion on utilities, there are still lots of energy savings opportunities that remain.

These aren’t quite as good as three grandkids, but are ones that I am proud of at work.

AIAG: If you had the power to make one major change at your company or in your industry, what would it be?

Hildreth: When the automotive industry fully understands the benefits of environmental sustainability and the potential for cost savings, we will be able to make substantial improvements in the areas of energy, carbon emissions, and water. GM cut its greenhouse gas emissions in half over the last two decades, but new technologies and methods will be required to achieve GM’s aggressive commitment of a 20 percent reduction by 2020 over a 2010 baseline. I want to instill in the next generation of energy engineers a desire to protect the environment as well as enhance our profitability.

If that doesn’t work, I can always rely on my grandkids. In the movie “The Lorax”, a once pristine land has been contaminated, but the citizens of Thneedville don’t want for anything. Deforestation led to the creation of this walled city made up entirely of artificial things. It’s a thinly veiled plot to show how damaged the world might become if we don’t act sustainably. We watched this movie together numerous times, and my grandkids seem interested in my job. It allows me to relate to them what I do for a living in a way that they can understand.

AIAG: What do you see as the value of volunteering time with AIAG?

Hildreth: For me, it’s been the personal growth through networking with external stakeholders. It enhances my job performance and provides a diverse perspective on environmental issues.

Reprinted with permission from AIAG. 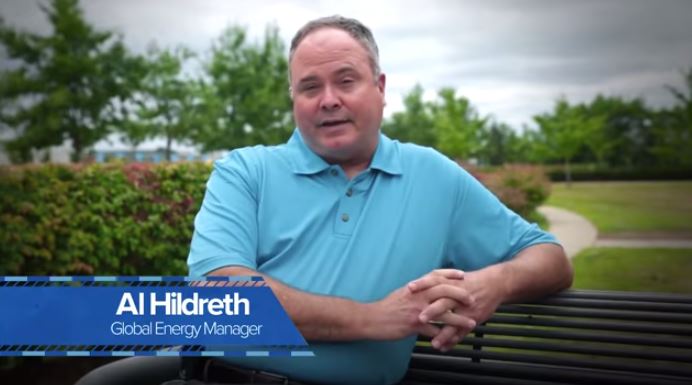