Guest Post: Getting Our Head In The Sustainability Game

Sep 20, 2013 11:15 AM ET
Tweet This:
What do football stadiums and @GM have in common? More than you think, says GM Director of #Sustainability http://bit.ly/1aZ4dw4
Blog
GM BeyondNow

What do football stadiums and GM have in common?

I recently attended the Green Sports Alliance Summit in NYC where I had the opportunity on a panel to share Chevrolet’s Carbon Reduction Initiative, Diamonds and Dreams Program, and its sponsorship of the IZOD Indy Car KV Racing Technology team whose driver, Simona De Silvestro is the only carbon neutral driver in IndyCar.

While there, I was taken for a loss (excuse the pun) at the efforts in the sporting community to reduce its environmental impact and green its games.  Take for example Lincoln Financial Field, home of the National Football League’s Philadelphia Eagles.

Positioned atop the stadium are 14 wind turbines that help to reduce energy consumption during the day, and put power back into the grid at night. Along with more than 11,000 solar panels on the roof of the stadium and the parking lot, they can produce more than enough energy needed on game day.  It’s currently the only carbon neutral, “off-the-grid” stadium in the U.S., but others are catching up fast.

In the five major sports, 38 pro teams use renewable for at least some of their needs and 68 have energy-efficiency programs.   Nearly all of them have or are developing recycling and compositing programs.

Now our 4.3 million sq. foot Orion Assembly plant that builds the fuel-sipping Buick Verano and Chevy Sonic might not draw in 80,000 fans on Sunday, but we do measure up in terms of scale.

Both types of buildings require a lot of electricity and generate a lot of waste, and whether you’re an NFL team or GM, you can save money and lessen your impact if you manage them appropriately.

Our assembly plants and other facilities around the globe use over 60 MW of renewable energy to reduce dependence on oil, cut our bills and help increase our efficiency.

In 2012, we recycled or reused 2.6 million metric tons of wastes at our facilities worldwide. That is equivalent to more than 38 million trash bags.  In fact, GM’s turned its waste streams into revenue streams, generating about $1 B from the sale of our waste management efforts.  This environmental action is good for business –and it’s a way of thinking that we incorporate into our company.

Returning from the Green Sports Alliance Summit, I’ve realized there are other opportunities beyond our sponsorships –from soccer to football–to help us further our sustainability message, whether we’re touting our products’ fuel economy or educating people about Chevy’s  environmental impact via our first-of-its-kind Ecologic label.

Our worlds may not be as different as one would think. By coming together we can get fresh viewpoints that we can take back to our organizations. After all, when it comes to sustainability, we’re all on the same team. 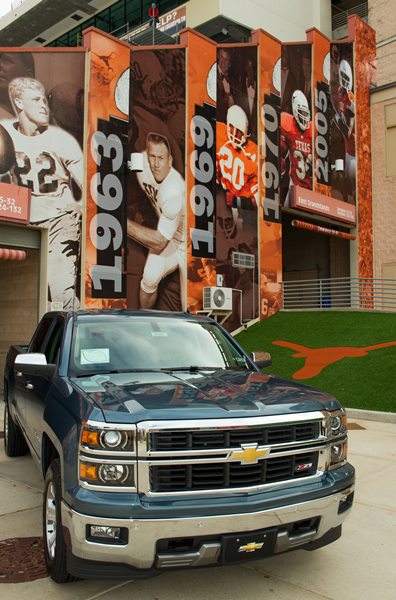