Nov 1, 2016 10:55 AM ET
Tweet This:
.@JetBlue #soarwithreading Program Will Travel to Fort Lauderdale http://bit.ly/2cQ13gf via @IcemaGibbs
Blog
This blog originally appeared on CSRwire.com

Since launching our award-winning Soar with Reading program in 2011, JetBlue has provided more than $2.25 million worth of books to children in need throughout out our network. This is no small feat. Countless crewmembers, community leaders and customers have helped as we set out to encourage kids’ imaginations to take flight through our reading network.

After five years of running a successful program, we took a step back to evaluate if we were making a real impact and if we were actually getting books into the hands of kids who needed them the most. We knew we were getting the books into the right hands, we just weren’t sure it was having a big enough social impact. We also established an advisory board of educators and community leaders and engaged select community partners to determine geographic trends and specific needs.

In 2015, we contacted early education expert Dr. Susan Neuman for an update on her ground-breaking work helping to identify and solve “book deserts.”  We partnered with Dr. Neuman and her research team to examine children’s access to age-appropriate books throughout our footprint. The findings were staggering; throughout our network Dr. Neuman uncovered book deserts, areas where families have little or no access to purchase age-appropriate books. In Detroit, we found only one age appropriate book for sale for every 42 children. For context we should site what that number is in affluent neighborhoods. That was nothing compared to the Anacostia neighborhood of Washington, D.C., where we found only one book available for every 830 children.

After identifying communities with a dire need for books, we developed a creative way to help provide these neighborhoods with free, age-appropriate books for children. We decided the timing for the biggest impact would be during the “summer slide” – the knowledge base lost during the summer months.

The result was a no-strings-attached vending machine that would distribute books for free. At the vending machines, children could choose their own books and take them home to begin to build their own personal libraries – completely free of charge. Over the last two years, JetBlue has installed nine custom Soar with Reading book vending machines and, in partnership with Random House Children’s Books, committed to distribute more than 220,000 children’s books in both Detroit and Washington, D.C.

Designed by Innovative Vending Solutions, the machines were installed throughout the summer months in areas that children regularly visit (such as community centers and churches), and were restocked every two weeks with new titles for children ages 0-14. Families were encouraged to take as many books as they want as often as they wanted.

Removing barriers to obtaining children’s books – such as cost and accessibility – has had a tremendous impact on members of these communities. Dr. Neuman’s team conducted preliminary research in Fort Lauderdale and found out that more than 14 percent residents currently live below the federal poverty level. Additionally, her team conducted surveys in the communities where the vending machines had already been placed and found that:

With the success of this year’s Soar with Reading program, we once again enlisted the help of our customers and community members through an online #BookBattle voting competition to help determine where the next 100,000 book donation should be made. JetBlue’s South Florida focus city, Fort Lauderdale, received more than 60 percent of votes cast beating out Boston, Long Beach, Calif. and New York City.

Solving for book deserts starts with access. Children living in book deserts are at risk of falling behind with language, vocabulary and comprehension, leaving them in jeopardy of academically lagging behind their peers who have access to books. As we continue to fight against the summer slide and help combat book deserts, we’re excited to travel to Fort Lauderdale in 2017 to deliver books to our youngest neighbors in this community.

To learn more about the JetBlue’s Soar with Reading, visit www.soarwithreading.com.

About Icema
Icema Gibbs is the director of corporate social responsibility at JetBlue. Gibbs is responsible for JetBlue’s corporate citizenship, working to enhance the company’s brand platform through global cause marketing and philanthropic initiatives. Through her leadership, JetBlue’s award winning Corporate Social Responsibility efforts have been recognized and applauded in the United States and abroad. Gibbs is one of JetBlue’s founders, having been with the airline long before it took to the skies. She joined the company in August 1999 as Director of JFK Operations. She is a founding board member of the City University of New York’s Aviation Institute at York College and serves on the boards of Greater Jamaica Development Corporation and the New York Council of Airport Opportunity. Additionally, she serves on the board of Do Something.org; a national not-for-profit web-based company that inspires and supports young people changing the world. She is also a member of the Greater New York Chapter of The Links, Inc. Gibbs is a native of Queens, New York, where she lives today with her daughter, also named Icema. 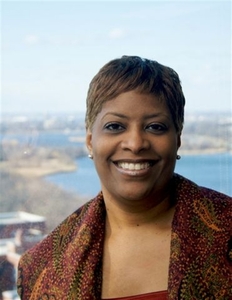