Millennials in the Workplace: What Do They Really Want?

by Adam Bonislawski
Jan 19, 2017 8:45 AM ET
Tweet This:
#Millennials in the #Workplace: What Do They Really Want? http://bit.ly/2jGmR2R @CBRE @CBREBlueprint @CBREResearch
Blog
CBRE Blueprint: Play of the Land

Entitled, flighty, never fully invested—if you were to take the stereotypes about millennials seriously, they’d be about the worst co-workers and employees imaginable.

Happily for HR departments everywhere, a recent report from CBRE Research suggests that (for the most part) the stereotypes would seem to be just that. Contrary to their reputations as overly coddled job-hoppers, the report, titled Millennials: Myths and Realities, finds that millennials are more similar to previous generations than has been advertised, particularly in terms of their work ethics and expectations.

For instance, the report, which features data from 7,000 CBRE staff members and 13,000 millennials from 12 countries, finds that while much has been made of millennials’ supposed tendency to switch employers at the drop of a hat, the majority—62 percent—would ideally prefer to change jobs as infrequently as possible.

The same goes for the notion that millennials expect to start at the top, as opposed to working their way up the corporate ladder. According to the CBRE report, roughly two-thirds consider the chance to learn new skills a major factor in choosing a new job, with many willing to spend time outside work and their own money on training.

Employers might also be laboring under misapprehensions when it comes to more basic millennial workplace preferences, like their supposed desire for more collaborative, flexible work office environments. As the CBRE report notes, “millennials do not emerge from the womb desiring collaborative working environments. Like other generations, they are heavily influenced by their personal experiences, and by the ‘cultural context’ of their workplace.”

In other words, it turns out that, much like the rest of us, if you give a millennial a private office, they probably aren’t going to want to give it back.

More generally, millennials appear to highly value the quality of their workspaces, with nearly 70 percent of those surveyed in the CBRE report saying they would make various trade-offs to secure a better workspace. In some cases, those trade-offs were significant. For instance, 7 percent said they would take a modest pay cut in exchange for a better office environment, while 8 percent said they would compromise their promotion prospects.

One millennial stereotype that does appear accurate, at least at first glance, is the generation’s preference for urban centers. Some 75 percent of millennials surveyed work in large towns or cities, while less than 10 percent work in business parks or rural settings.

A closer look, though, suggests that here, too, millennials aren’t quite the people they’re thought to be. More than half surveyed—55 percent— said they find small or medium-sized towns either “fairly” or “very” appealing, compared to 63 percent that said the same for cities. As the CBRE report notes, this could represent an opportunity for employers located outside major city centers, particularly given that suburban and small-town locations are likely to offer lower costs of living.

In any case, figuring out what motivates millennial employees is more than just an intellectual enterprise. The generation is projected to make up roughly half the global workforce by 2020, meaning that in a few years millennials will cease being workplace curiosities and become, instead, simply business as usual. 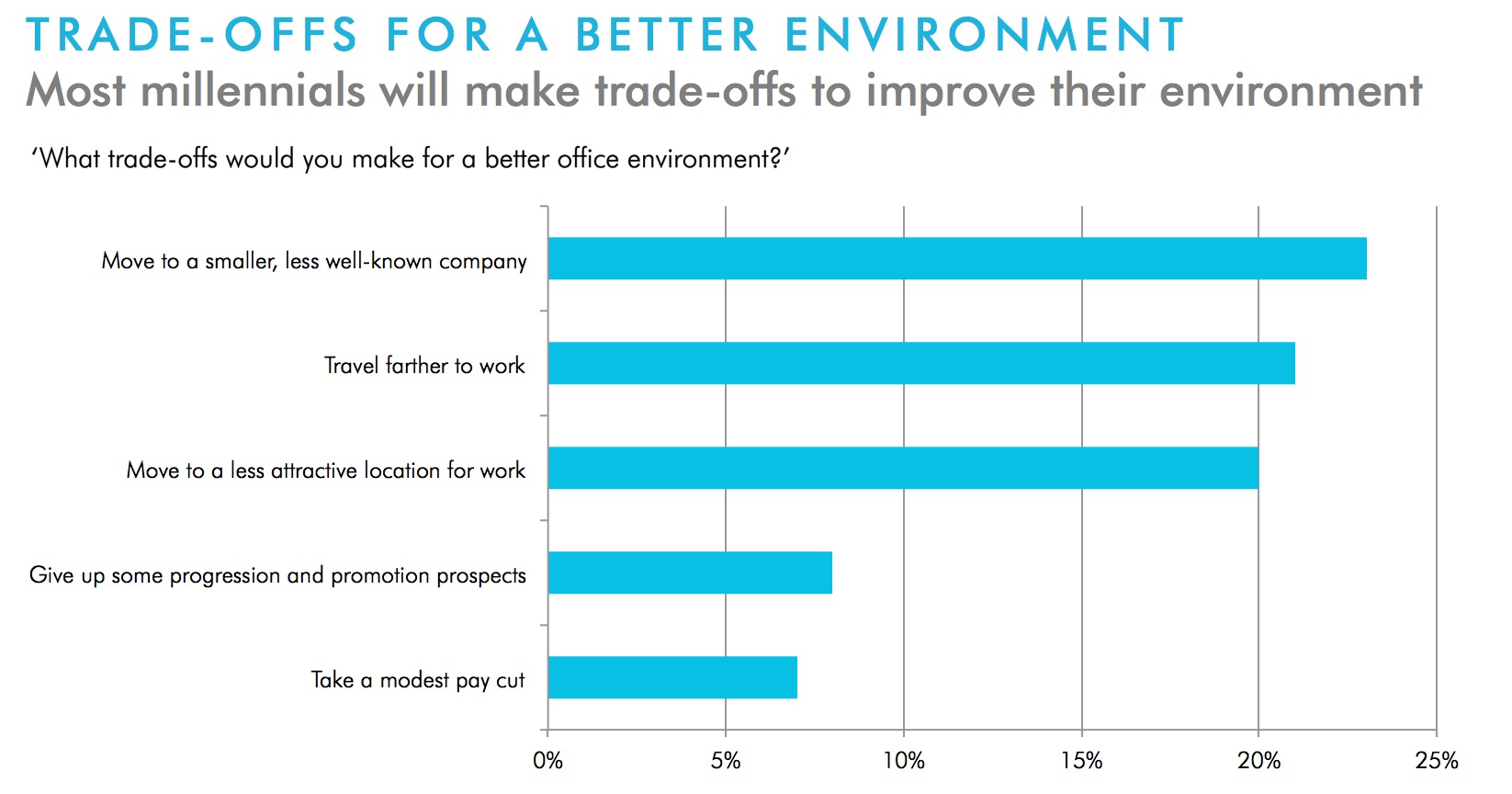