Stella Artois and Water.org Partner to “Buy a Lady a Drink”

Access to clean water is one of the world's most pressing issues. Even as water flows freely from taps in developing countries, woman around the world spend a combined 200 million hours every day collecting a few gallons for their families. Like many social issues facing developing countries, it is hard for Americans to understand the magnitude of such a crisis and what they can do to help. The newest campaign from Water.org and Stella Artois does just that through a combination of impactful storytelling and a simple call to action.

This week, Stella Artois and Water.org partnered to ask consumers to "Buy a Lady a Drink," but perhaps not in the way one might imagine. The campaign, launched by Matt Damon and Gary White during the Sundance Film Festival, highlights the plight of 750 million people worldwide who live without access to clean water. This disproportionately affects women, many of whom spend the majority of their days collecting water. 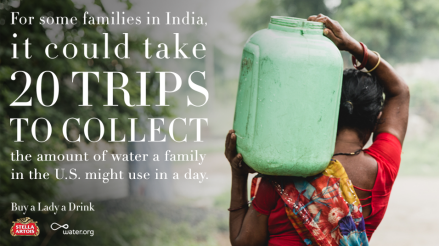