Amid the sawdust and hum of power tools, students at East Columbus High School in Lake Waccamaw, N.C., are helping rebuild their community.

Students built 50 wooden bed frames in their classroom workshop for Columbus County residents whose homes were damaged by Hurricane Matthew. The October 2016 storm started in Florida and moved up the coast, killing nearly 50 people and damaging more than 100,000 homes and businesses in North Carolina.

In rural Columbus County, flooding caused the most damage in Fair Bluff, a town about an hour from the coast.

Following the hurricane, East Columbus High teacher Bryan Fowler watched his dog chase fish in his flooded front yard. He said he felt thankful that only the yard was flooded and wondered how he could help others who weren’t as lucky.

After speaking with his neighbor, County Superior Court Judge Doug Sasser, he found an answer. Sasser, who was helping with disaster relief efforts, and Duke Energy representative John Elliott had an idea for Fowlers’ students to build beds for Columbus County residents who lost everything.

Fowler designed a bed frame that was durable, easy to transport and simple enough for his agriculture mechanics students to build. Duke Energy provided $10,000 to buy the supplies while Schools Assistant Superintendent Jonathan Williams identified people in need and enlisted the help of South and West Columbus high schools so they could build bed frames, too.

“A lot of people still aren’t able to return to their homes,”  Williams said, “and we don’t know if they will be able to.”

Columbus County’s main industries are agriculture and manufacturing, so Fowler, who also leads the school’s Future Farmers of America chapter, teaches his agriculture mechanics students things they would need to know to work on a farm. Since woodworking is part of the curriculum, he said he thinks it’s a good opportunity to learn.

“Not only are the students getting some hands-on experience learning how to fasten the wood with different types of materials,” Fowler said, “they are also applying those skills in a real-world application, and they’re helping people, too.”

With each headboard, the students improve their technique, and Fowler, who supervises from about 10 feet away, only chimes in to assist periodically. In a 90-minute class, the students complete about five headboards.

The design is simple. The headboard and shorter footboard have four vertical wood slats. The long edge of the bed frame has a lip that supports a mattress and eliminates the need for a box spring. All of the pieces lock together with notches and grooves rather than screws, making it easy to transport from East Columbus High  to South Columbus High, where another class will paint the beds before they are delivered to recipients.
It’s a small step in rebuilding the devastation, but the class is happy to help a few neighbors in need.The students carry the completed headboard into the workshop next door to clear the clutter. Their small workshop, which is about two car-lengths wide and three deep, was quickly filled with knee-high stacks of blonde lumber that will become queen and twin-sized beds.

“Obviously, most of us didn’t get hurt [by the hurricane], but people up in Fair Bluff – it really got the best of them,” Wilkins said after completing a headboard. “I’m just glad I’m helping.” 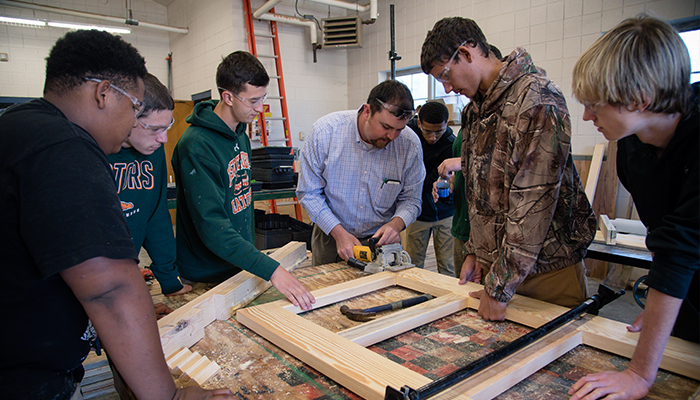 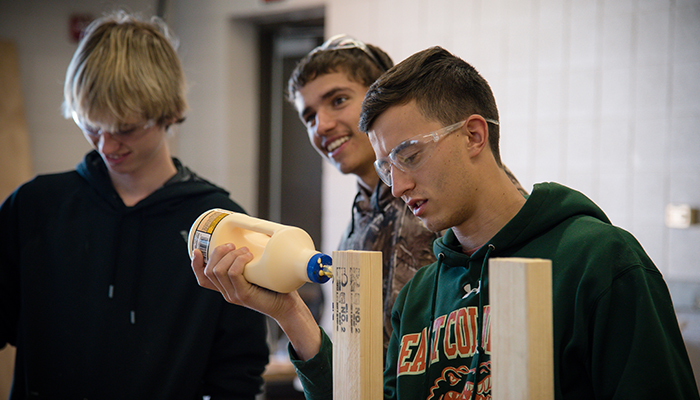 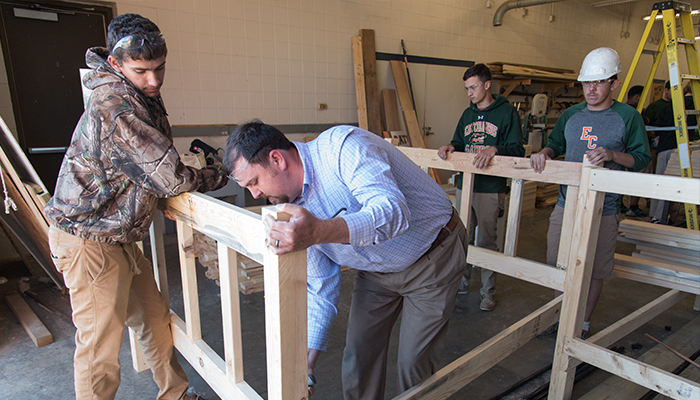