TransCanada’s long-term dedication to investing in emission-less and high-efficiency energy sources, research and development (R&D) and environmental initiatives hasn’t gone unnoticed. After the CDP's careful analysis of almost 2,000 corporate submissions from around the globe, TransCanada was awarded a position on The A List: The CDP Climate Performance Leadership Index (CPLI) 2014 for its actions to disclose carbon emissions and mitigate the business risks of climate change.

“Receiving a score of 99A and being named to The A List: The CDP CPLI 2014 is extremely rewarding for TransCanada,” says Andrea Jalbert, vice-president of Community and Sustainability at TransCanada. The score reflects 99/100 in terms of the extent and quality of TransCanada's response and an ‘A’ rating for the level of action on climate change mitigation, adaptation and transparency. This positive news comes on the heels of TransCanada's score at the 88th percentile on the Dow Jones Sustainability Index (DJSI) for 2014.

“We work every day to live our values and demonstrate our commitment to environmental stewardship, protection and performance. Working with CDP, DJSI and other measurement agencies helps us continue to raise the bar for ourselves in terms of protecting the environment at every level of our operations.”
-- Andrea Jalbert, vice-president, Community and Sustainability, TransCanada

All submissions were independently assessed against CDP’s widely-respected scoring methodology and ranked accordingly. TransCanada is one of only 187 organizations to be awarded an A grade for climate performance, earning a position on this global list, ranking corporate efforts to mitigate climate change.

“This score is unprecedented for a Canadian company,” said Cheryl Johnson, TransCanada’s climate change and air emissions advisor. “TransCanada is one of only five Canadian companies on The A List: CDP CPLI 2014, and the list’s only Canadian energy company.”

“Only three of these leaders have set absolute targets for emission reductions. TransCanada goes the furthest with one target to 2018, as part of the RGGI initiative, and another to 2020 as part of the Quebec cap and trade scheme.”
-- The A List, The CDP Climate Performance Leadership Index 2014 (Page 20)

The A List presents those companies identified as demonstrating a superior approach to climate change mitigation. It was produced at the request of 767 investors who represent more than one third of the world’s institutional investors with a combined portfolio of $92 trillion in assets.

"Recognition at the highest level by the CDP – the international NGO that drives sustainable economies – is significant because we supply 20 per cent of the natural gas North America consumes each day, export a quarter of Canada’s oil supply and are Canada’s largest private power provider. Being relied upon to responsibly delivery these products to consumers takes energy,” says Jalbert. “But for over 60 years we have been committed to the sustainability of both the land and our business, and we will continue to do so. We don’t see those things as being mutually exclusive.”

The implementation of TransCanada’s Environmental Strategy supports company-wide commitment to the environment. That’s one reason TransCanada’s GHG emissions-management successes can be attributed to different activities across the organization. These include implementing technologies to directly reduce or avoid emissions, installing high-efficiency equipment – like the technology to turn waste heat into power – and sponsoring R&D to reduce or avoid emissions and improve measurement.

Many long-term R&D investments over the past 60 years have been geared toward encouraging increased efficiency and implementing environmentally beneficial technologies and techniques. In 2013 alone, TransCanada invested over $22 million in R&D projects with benefits that included ensuring safety, improving efficiency, reducing emissions and environmental stewardship, not just for TransCanada, but to improve industry performance as a whole.

“Global greenhouse gas emissions continue to rise and we face steep financial risk if we do not mitigate them. The business case for action to mitigate climate change has never been stronger or more urgent. For this reason we congratulate those businesses that have achieved a position on The A List: The CDP Climate Performance Leadership Index,” says Paul Simpson, chief executive officer of CDP.

“These companies are responding to market demand for environmental accountability and at the same time are making progress towards the realization of sustainable economies.”
--Paul Simpson, CEO of the Carbon Disclosure Project

“When it comes to our environmental, social and economic performance, we are committed to doing what’s right,” says Jalbert. “A huge cross-section of people across our organization take part in these reporting processes, and making sure we’re providing detailed and honest information helps us demonstrate that our commitment to corporate social responsibility goes beyond words; it can be measured and reported on these unbiased platforms that hold credibility at a worldwide level.”

The A List: CDP Climate Performance Leadership Index 2014, along with the climate disclosures of all companies publicly taking part in CDP’s climate change program this year, is available on CDP’s website. 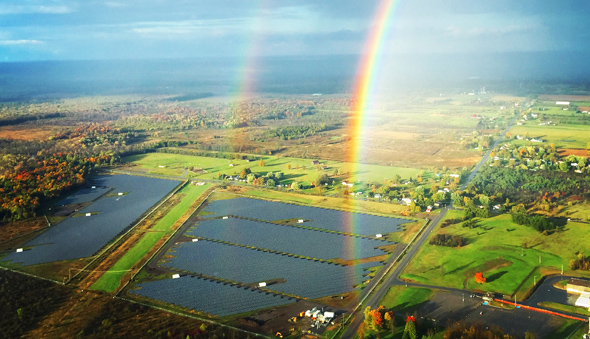