Today as I joined President Obama at the White House and looked on as EPA Administrator Gina McCarthy issued the agency’s final Clean Power Plan rule, I found myself reflecting on how much has changed in the past 25 years. Indeed, a lot of things were different in 1990: George H.W., not Jeb, was contemplating his future in the Oval Office; the only Taylor on the airwaves was named James; and businesses were widely opposed to the latest regulations aimed at reducing pollution from power plants.

Much has changed since then. On Friday, 365 businesses – from small local companies to iconic Fortune 500 brands – voiced their support for the rule and called for “timely” submission of implementation plans by state governors.

In letters sent to 29 governors last week, diverse companies from General Mills and Nestle to Unilever, Mars and VF Corporation called on states to seize the wide-ranging benefits of energy efficiency and renewable energy as the best way to meet the EPA’s goal of reducing power plant carbon pollution by 32 percent by 2030. This unprecedented support from the business community is exciting but should come as no surprise, as the Clean Power Plan will drive economic value for companies in all 50 states. It gives states the unique flexibility to chart their own energy futures, offering opportunities to expand clean energy solutions, attract new industries and create thousands of jobs. And there’s more: based on the draft rule, consumers could save up to $41 billion in electricity costs in the next 15 years under the plan.

The business community doesn’t make endorsements willy-nilly, especially when it comes to industry regulation. But investors and corporate executives know full well that climate change is a dire threat, and that unchecked global warming pollution threatens economic growth and prosperity.

It’s clear that business support for this game-changing plan is grounded in the economic opportunity associated with limiting carbon pollution. We need look no further than our own Northeast states for evidence, where the Regional Greenhouse Gas Initiative, with its big focus on energy efficiency, has helped consumers save $460 million on their energy bills and created 14,100 new jobs in the past three years alone.

To be sure, these trends exist far beyond the Northeast. States nationwide are already reducing emissions and on track to meet or exceed the Clean Power Plan requirements. In fact, 40 states have decreased CO2 emission rates by an average of 18 percent between 2008 and 2013. North Carolina and Minnesota have reduced carbon pollution by 24 percent between 2006 and 2012, thanks in large part to strong state renewable energy and energy efficiency standards. Even coal-industry stronghold, Kentucky, is set to reduce emissions by 16 percent from 2012 levels.

Simply put, most states are demonstrating that it is not only possible to reduce carbon pollution, but also economically smart to do so.

A Staples executive put it well last week, saying: “The rhetoric is out there that the Clean Power Plan is bad for business, but that is absolutely not the case.”

Opponents of the Clean Air Act Amendments of 1990 claimed that the law would inflate energy bills and threaten electric system reliability. Electricity rates have, however, actually decreased 10 percent in the past 20 years (adjusting for inflation). Yet despite these unfounded concerns, similar arguments are being made by opponents of the Clean Power Plan today.

Friday’s call to action from the business community underscores that the Clean Power Plan will enhance company competitiveness by providing the long-term certainty businesses need to invest in renewable energy and energy efficiency.

Even before today’s final rule, companies had been adopting their own ambitious energy-saving and greenhouse gas reduction goals. At least 43 percent of Fortune 500 companies have already set targets to reduce carbon pollution, improve energy efficiency and procure more renewable energy. Over half of the Fortune 100 are publicly disclosing their climate and energy-saving targets – and they’ve collectively reduced carbon emissions by 58 million tons, while saving $1.1 billion annually by doing so. These CO2 reductions by corporations are the equivalent of retiring 15 coal-fired power plants.

Moving ahead with the Clean Power Plan is important internationally, too. As countries worldwide focus on upcoming international climate negotiations in Paris later this year, we can’t afford to be divided in this country on our biggest opportunity to show leadership when it comes to tackling climate change. The Clean Power Plan gives us a much-needed opportunity to reduce the emissions that threaten both the U.S. and global economy. We already know the world must invest at least an additional trillion dollars per year into clean energy if we have any hope of avoiding the worst impacts of climate change, and Friday’s announcement of business support for the Clean Power Plan is a loud and clear affirmation that we’re on the right track.

The EPA has provided a flexible, practical and economically sound blueprint to transition America toward a low-carbon future. Now, it’s time for state governors to get behind it. 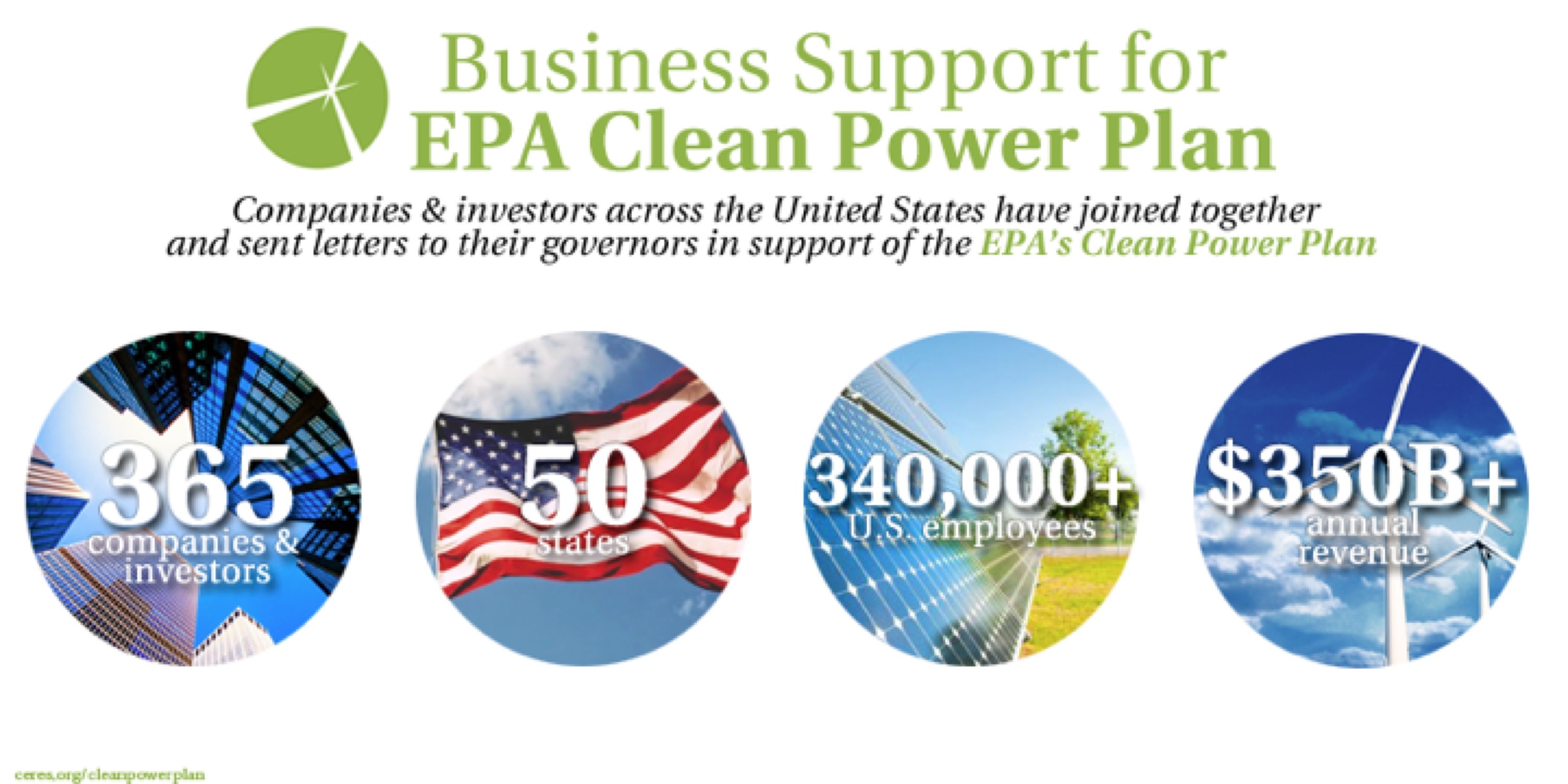