What do an artificial heart, the theater, and Gabon all have in common? From where you’re sitting, probably not much. For me, however, they are key facets of my life that have led me to a career in impact investing.

Years ago when I was an undergraduate, a team and I were assigned to construct an artificial heart. This heart that we built was intended to test a new piece of medical technology, a hemofoil valve. The valve, we found, held significant promise of reducing the development of fatal blood clots. The technology was pretty straightforward to me, however, the questions following the test were not. Who now gets access to this valve? Only those who can pay the price? Only those who are younger, healthier, and have a possibly longer life to live? The discussions exposed me to the world of inequality that we live in – a world in which not everyone has equal access to technology, medicine, and opportunities more broadly.

After graduation, I joined the Peace Corp in search of a new adventure and greater exposure to the world. I ended up working in Gabon, where I taught math and English to middle school-aged students. I lived in a small, rural village, of about 100 people, that had no access to electricity or running water. Despite these challenges, the village was able to support and care for each other. It was clear that their survival was very much dependent on their ability to come together as a community. I was impressed by their ability to work as a group, acknowledging and being respectful of each other’s and each of their own interdependence on one another. I realized, that not just here in this small village in Gabon, but in larger, towns, cities, countries, even the whole world, we all operate, fail, and succeed as interdependent communities.

When I returned from Gabon I made the decision to focus on finance. My experiences abroad alongside my education had led me to the thinking that capital equates to power, and is a key determinant of capability for individuals, businesses, and communities. Although now I know that finance is only one piece of the pie of life, I still maintain the important role that it plays.

For several years my career followed this track. I got my MBA from Columbia University and worked at a number of large financial institutions, including Neuberger Berman and Morgan Stanley. Over time, though, I felt that my job was not addressing the issues and the values that were important to me – the ones that I learned from my time in Gabon, and building that artificial heart. I didn’t know what I wanted to do next, but I knew I wanted to do something else. So I took a risk and quit my job.

At the time, I was living in New York City, and the opportunities were endless. A local theater that I was a fan of, The Public Theater, had an opening for a volunteer, and I jumped on it. The Public was special to me because of the values it held. Its founder, Joseph Papp, believed that art should be accessible to everyone, regardless of wealth – and this message very much resonated with me and my (artificial) heart.

Like many small, creative institutions, The Public found itself in some financial peril. It was upsetting to see an institution that was so impactful on the community struggle as much as it did. I didn’t understand how such an asset was being undervalued.

I did some research and found an organization that valued the arts from a financial perspective, called Nonprofit Finance Fund (NFF). Back then, they were one of the few community development financial institutions (CDFIs) that viewed the arts as investable and valuable commodities in communities. I soon joined the NFF team and dived into the world of community investing.

At the time, the term “impact investing” had yet to be coined. CDFIs however, as established institutions, had been working to provide credit and financial services to underserved markets and communities since the early 1990s. I found that the work that NFF was doing, and other CDFIs, was incredibly valuable – in one way because they were driving capital to much-needed community services, but in another way, because they were also receiving interest from the loans they were making.

Elsewhere in the world, other investors and financial institutions were recognizing this type of double-bottom line opportunity. An opportunity that soon merited its own name – impact investing – and its own space in the investing world.

Through my work at NFF, I came across Calvert Foundation, who had invested in NFF and several other CDFIs. Calvert Foundation, through the Community Investment Note, provided investors the opportunity to actually invest in CDFIs, and benefit from both the financial and social returns that they generated.

The opportunity to work with the investors that were financing CDFI work, and to help grow the amount of investment that was going into CDFI work, was very appealing to me. I later joined Calvert Foundation, only to build my way up to become CEO.

Today I spend a lot of my time explaining what impact investing is and why it is so important. 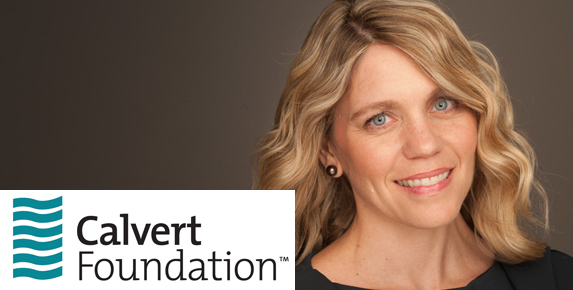