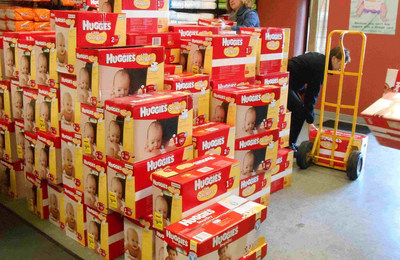 (3BL Media/Justmeans) – Nearly one in three American families struggle to afford diapers for their babies. In some cases, parents stretch the time between diaper changes to make their limited resources last, which can lead to serious health problems for the babies. Young children can end up hospitalized with problems like urinary tract or staph infections. These parents often have to choose between paying for food or diapers, leading to increased family stress and strife. To help families here, at the start of this year, Huggies will become the first global diaper brand to offer a program that will enable diaper banks to purchase bulk quantities of high-quality Huggies diapers at competitive prices. This initiative is Kimberly-Clark’s ‘No Baby Unhugged’ campaign to help nurture babies with care, cradling them in comfort and protection.

Kimberly-Clark first brought the issue of America’s diaper needs to the forefront in 2010, when its groundbreaking Huggies study revealed one in three mums suffer from the inability to provide fresh, clean diapers for their babies. Since then, Huggies has donated more than 200 million diapers and wipes, and helped build up 300+ diaper banks across the country as the founding sponsor of the National Diaper Bank Network (NDBN).

This action is also part of Huggies’ continued commitment to answering President Obama's March 2016 call to help families suffering from lack of diapers and the inability to provide fresh, clean diapers for their babies. The President’s budget called for a $10 million investment to test effective ways to get diapers to families in need and document the health gains. However, the White House, knowing that it could not wait on a grid-locked Congress to act, called on private and non-profit leaders to explore creative ways they could address this widespread public health problem.

Lowest income families with infants may pay at least 14 percent of their income for diapers alone. That works out at an average of $936 for diapers per child each year! Added to this, these families may not have access to transportation, to buy in bulk at cheaper prices, or access to the Internet or ability to receive packages required for online subscription services. It’s estimated that 5.3 million children in the US aged three or younger live in poor or low-income families— and there is no federal assistance for purchasing diapers, unlike other essentials like food or health insurance. On average, infants require up to 12 diapers per day, toddlers about eight.

A study of 877 pregnant and parenting women published in Pediatrics in 2013 found that needing diapers and not being able to buy them was a leading cause of mental health problems among new mums. Therefore, Huggies efforts will be making a difference by not only donating 20 million diapers to the NDBN each year, but also giving peace of mind to new mums and serving struggling American families.