To kick off Phase 2, SAI carried out 2 workshops in India - in New Delhi on April 23 and in Bangalore on April 25. More than 90 managers from the participating factories attended. The focus of the workshops was to bring factories up to speed on the next steps for the RAGS project and use working methods adapted from the Participatory Gender Audit process developed by the ILO.
At the workshop, women and men were represented in proportions of about one to four. During these hands-on sessions, factory managers worked in small groups, sharing and learning from each other, as well as hearing about the ILO's experience in promoting gender equity in the workplace. SAI's Geneva-based Representative Steven Oates joined SAI India Program Director Rishi Sher Singh to carry out the workshops. Having previously worked with the ILO as a Senior Advisor on Rights at Work, Mr. Oates brought this additional perspective to the table.
A mapping exercise was conducted to identify suppliers' goals for improvement in areas related to workplace communication and gender.  "It was really encouraging to see how teams of men and women from different factories, working together, could compare existing problems and risks, and work out plans for progress," said Mr. Oates. "There is good appreciation of how this in turn leads to greater efficiency in factories."
Participants commented "it is important to involve workers and sensitize them on gender issues. One should not be gender biased in personal as well as in professional life, linking to the women rights issues in India." A brand managers who joined the workshops added, "the supplier participation was amazing, the agenda was well structured and simple but very effective. Interesting to note the gender biases during discussion on man and woman's role in a 24-hour day."
Mr. Singh concluded, "it has been a very valuable session by bringing factory mangers together and forming an intense learning group. It is interesting to note the priority areas of improvements mapped by managers and a clear commitment to create change in their respective factories. A great learning experience supporting Steven in these workshops!"
About SAI's RAGS Project:

“RAGS: Improving Social Standards in the Indian Ready-Made Garment Sector” is a program of SAI to improve working conditions of workers by reducing gender discrimination and improving factory level processes of engagement with homeworkers in supply chain. The program is supported by UKAID from the Department for International Development (DFID). Activities focus on classroom and onsite trainings of suppliers and subcontractors on gender discrimination issues and engagement with homeworkers. 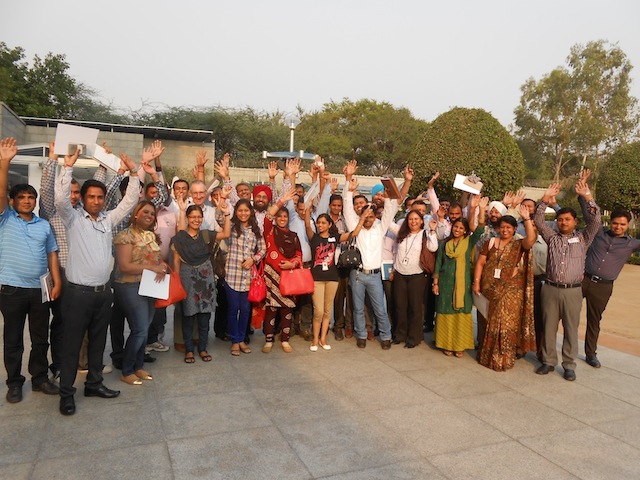