ATLANTA, March 15, 2017 /3BL Media/ - Cox Enterprises announced today the completion of the New River Energy Facility in Beckley, W. Va. The facility captures landfill gas to generate energy and reduce methane emissions, which produces positive outcomes for the local community and the environment. The facility has the capacity to annually offset 14,200 tons of carbon and produce enough clean energy to power nearly 2,000 homes.

The New River facility is part of Seven Islands Environmental Solutions, a subsidiary of Cox Enterprises that implements new technologies and programs to create a positive impact on the environment.

“Cox has a long-standing commitment to the environment and is embracing sustainable technology to make a positive impact,” said Cox Enterprises Vice President of Environmental Sustainability Keith Mask. “The New River Energy Facility is transforming byproducts from the waste sector into clean energy for the community.”

Landfill gas is created as waste decomposes and 50 percent is comprised of methane gas. Cox is partnering with the Raleigh County Solid Waste Authority (RCSWA) to utilize the landfill gas for the beneficial purpose of energy generation rather than emitting it to the atmosphere. A system of wells captures the landfill gas, which the facility dries, cleans and compresses into a renewable fuel. The fuel is converted into electricity and fed into the local energy grid to power homes.

“The Raleigh County Solid Waste Authority is very proud and excited to work as a partner in the New River Energy Facility,” said RCSWA Executive Director James Allen. “RCSWA is an integrated solid waste management facility that prides itself on leading the state in the waste management industry. The addition of this green energy project is another logical step for the prudent management of our landfill gas.”

Cox is utilizing multiple waste management technologies to make a positive impact on the environment. The company’s Golden Isles Conservation Center annually removes 80,000 tires from the waste stream, converts them to their original components and repurposes them for second life. Cox is also reducing its consumption of materials and has seven zero waste to landfill facilities across the nation.

The New River Energy Facility is part of the company’s Cox Conserves sustainability program, which is celebrating its 10th anniversary. The company seeks to send zero waste to landfill by 2024 and become carbon and water neutral by 2044. Since 2007, Cox Enterprises has invested more than $100 million in sustainability and conservation initiatives. Through these investments, the company has offset 82,000 tons of carbon, diverted 97,000 tons of waste from landfill and conserved 57 million gallons of water. 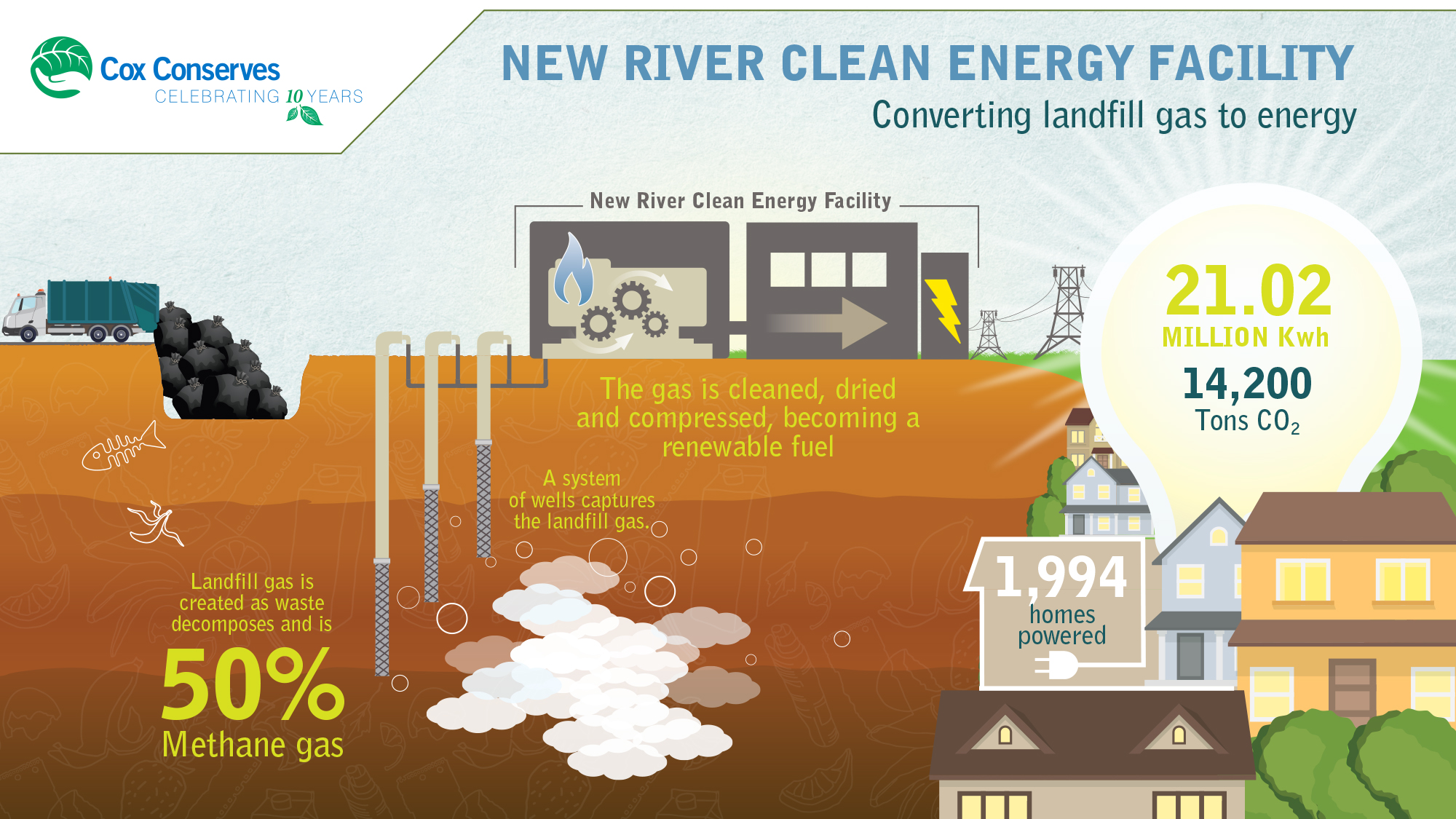