NEW YORK, March 24, 2016 /3BL Media/ - Continuing the in-depth analysis of S&P 500 (r) companies' sustainability reporting activities, Governance & Accountability Institute teamed with the Trust Across America / Trust Around the World program to explore potential relationships of the trustworthiness of companies that do and do not report utilizing the TAA/TAW's proprietary  FACTS® scoring. FACTS® analyzes approximately 2000 US based public companies on five quantitative indicators of corporate trustworthiness. TAA/TAW has found that companies with higher FACTS® scores are more profitable and over time their stocks outperform major indexes.

Trust Across America analyzed the current year's data for the S&P 500 companies that G&A identified as reporting on Sustainability, versus the shrinking minority of identified non-reporter, and found the following.  Of the 99 companies that do not publish sustainability reports, TAA had data on 72 of them, and of the 401 reporting companies, TAA has data on 398 of these companies.  Looking at this universe of a total of 470 companies with full data from both parties, G&A and TAA determined that:

The TAA Trust Score chart attached illustrates the percentage of S&P 500 non-reporters versus companies that report on Sustainability in the various TAA scoring bands.

Trust Across America developed its "FACTS® Framework" seven years ago; the audit model's approach is to combine financials and non-financials in measuring trustworthy business behavior to tell an integrated, unbiased and unified story to stakeholders.  The "FACTS" Framework elements are:  "F" for financial stability and strength; "A" for accounting conservativeness; "C" for corporate integrity; "T" for transparency; and "S" for sustainability. All indicators are equally weighted. The framework is applied to more than 2,000 companies to determine the "High Trust" enterprises on a scale of 1 to 100 with 100 being the highest.  Companies do not participate in the independent annual analysis.

Commenting on the TAA/TAW findings, CEO/Cofounder Barbara Brooks Kimmel said: “Understanding that no company is perfect, it comes as no surprise that companies choosing to voluntarily report their sustainability practices score substantially higher in our FACTS® Framework. The “best” companies have incorporated organizational trust as an intentional business strategy and seek to meet the long-term needs of all their stakeholders, not just shareholders.”

Background:  G&A’s Flash Report (March 15, 2016)
In the fifth annual monitoring and analysis of S&P 500 Index® company reporting just completed by the Governance & Accountability Institute research team, the findings are that eighty one percent (81%) of the companies included in this important investment benchmark published a sustainability or corporate responsibility report in 2015.

The S&P Index is one of the most widely-followed barometers of the U.S. economy, and conditions for large-cap public companies in the capital markets.

To put this in context G&A in tracking prior year(s) reporting found that:

About Governance & Accountability Institute, Inc.
Founded in 2006, G&A Institute (www.ga-institute.com) is a sustainability consulting firm headquartered in New York City, advising corporations in executing winning strategies that maximize return on investment at every step of their sustainability journey.  The G&A team helps corporate and investment community clients recognize, understand and address sustainability issues to address stakeholder and shareholder concerns.  G&A Institute is the exclusive Data Partner for the Global Reporting Initiative (GRI) in the USA, UK and Ireland.  A G&A team of six or more perform this pro bono work on behalf of GRI. Over the past 5 years, G&A has analyzed more than 5,000 sustainability reports in this role and databased more than 100 important data points for each of the five thousand reports.

*S&P 500®
According to S&P Dow Jones Indices / McGraw Hill Financial: “The S&P 500® is widely regarded as the best single gauge of large cap U.S. equities.  There is over US$7 trillion benchmarked to the index, with index assets comprising approximately US$ 1.9 trillion of this total. The index includes 500 leading companies and captures approximately 80% coverage of available market capitalization.”  The S&P 500 is a trademarked® property of S&P Dow Jones Indices, McGraw Hill Financial. 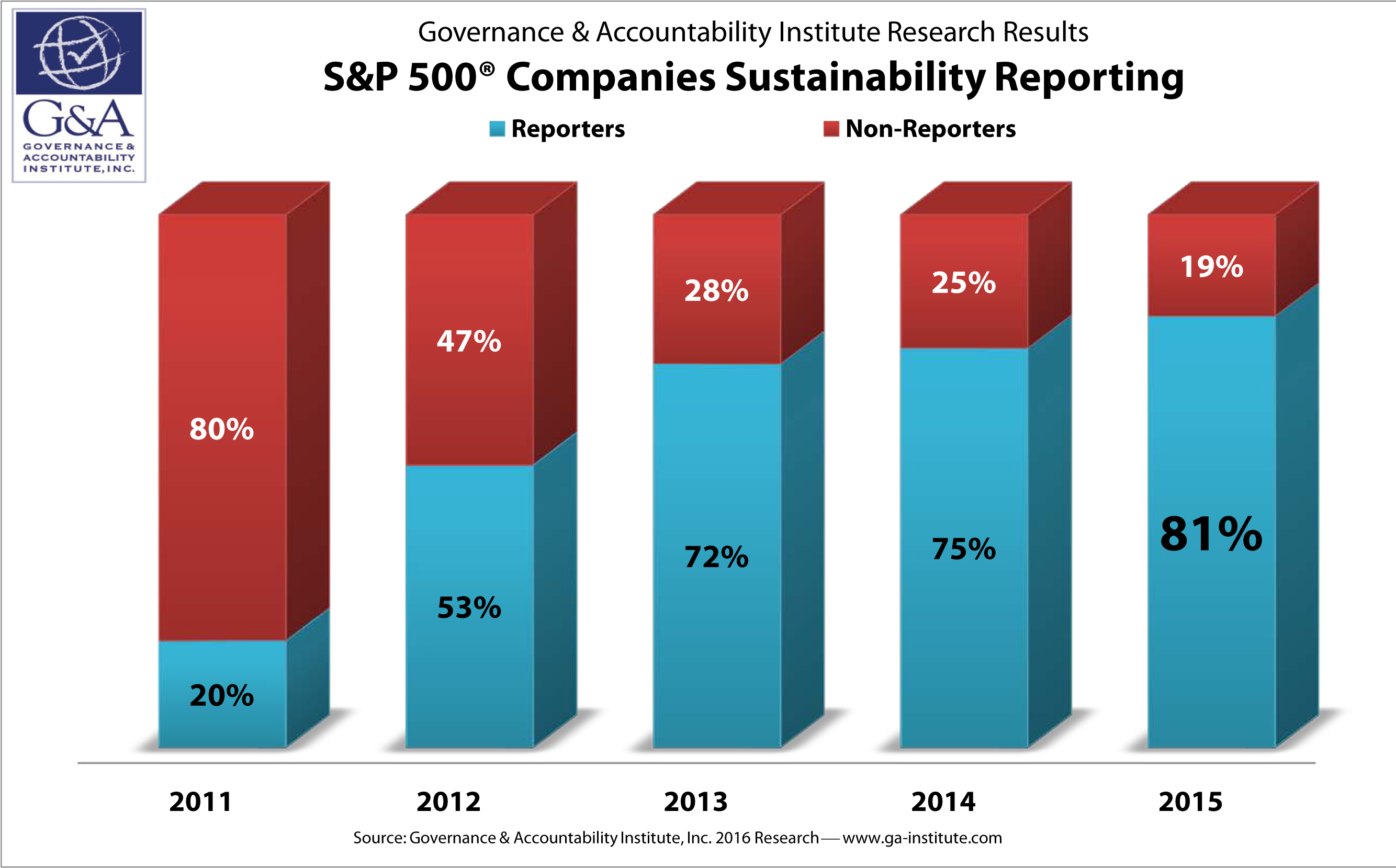 Moving the World Forward Toward a More Sustainable Future: The Member Nations of the United Nations, Working Collaboratively For Progress in the 21st Century
Jun 22, 2020 11:00 AM ET
Will We Ever See SEC Rules/Guidance for Corporate ESG Disclosure and Reporting? The Question Hangs in the Wind...
Jun 9, 2020 10:30 AM ET
There, in the Company's 401-K Plan - Do You Have the Choice of ESG Investments? Ah, That Would Have Been Good for You to Have in the Recent Market Downturn...
Jun 1, 2020 1:00 PM ET
Questions We Are Thinking About in the Midst of Major Disruption on Sustainable Investing Trends & Corporate Sustainability Journeys
May 18, 2020 1:25 PM ET
Titles Matter to Provide Context and Direction - for Corporate Leaders and the Providers of Capital
May 12, 2020 1:15 PM ET