LAS VEGAS, June 14, 2017 /3BL Media/ – The MGM Resorts Foundation is proud to welcome Jen Welter, the first female coach in the National Football League (NFL), to WLC 2017.  This is the 11th year for the non-profit event which will be held at MGM Grand Conference Center in Las Vegas, NV Aug. 7 and 8.

When Welter was hired by the Arizona Cardinals in 2015, she became the first woman to hold a coaching position of any kind in the NFL, breaking what was once seen as an impenetrable glass ceiling in the male-dominated sport.  It was undoubtedly a tough hurdle for a woman to clear, but Welter had already made history in 2014 when she signed with the Texas Revolution indoor football team, becoming the first woman to play a contact position in men’s professional football.

Welter – who holds a Ph.D. in psychology and master’s degree in sport psychology – has written a book called, “Play Big: Lessons in Being Limitless from the first Woman to Coach in the NFL,” detailing her experiences as a professional coach.

It’s scheduled to be released Oct. 3 but WLC attendees will get a sneak preview of those lessons when Welter addresses what organizers expect to be a sell-out crowd of more than 1,000. She will use her love of football to share unique insights on authentic leadership, the power of sports and the mental acuity it takes to achieve what others may say is impossible.

Each year, proceeds from the WLC, after costs, are donated to a nonprofit organization devoted to the welfare and development of women and children in Las Vegas. Dress for Success Southern Nevada, the local nonprofit that provides gently used professional clothing and career counseling services to empower women to achieve economic independence, recently received a $25,000 gift from the 2016 conference.

“A trailblazer in every sense of the word, Jen Welter serves as a powerful role model and inspiring reminder that anything is possible and barriers are meant to be broken,” said Dawn Christensen, the conference’s organizer and director of National Diversity Relations for MGM Resorts. “I think conference attendees will benefit greatly from hearing the leadership stories she plans to share with us.”

The conference sold out earlier this month, the fourth year in a row that registration has reached capacity. No doubt, the demand signals that women are seeking the professional guidance, inspirational programming and networking opportunities WLC provides, Christensen said.

Welter played professional football for more than 14 years as a linebacker, mostly with the Dallas Diamonds of the Women's Football Alliance. She helped lead them to four championships. Her on-field experience dates back to her time on the rugby pitch at Boston College.

The 2017 Women’s Leadership Conference theme is “Women Inspiring Women.” The conference will offer a wide range of learning opportunities, career guidance and personal growth tools, including:

WLC is open to women of all ethnicities, professions and social backgrounds, locally and nationally, and men who support them. The MGM Resorts Foundation is the conference’s presenting sponsor.

Registration costs $485 and includes the full conference and all workshops and lectures, a networking reception, and continental breakfasts and lunches catered by MGM Grand. Time is also allotted for attendees to build key professional relationships with other women attending while enjoying the hospitality and entertainment of MGM Grand and other MGM Resorts International destinations. 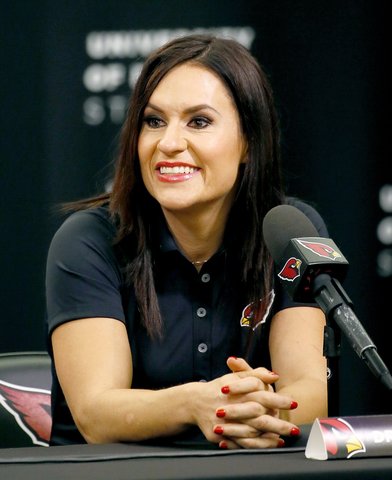