New York, NY, Monday, November 3, 2014 /3BL Media/ – Clayton Kershaw on Monday became the first player to ever win three Players Choice Awards in a single year as he was recognized by his fellow players as the NL’s Outstanding Pitcher and the overall Player of the Year as well as the Marvin Miller Man of the Year, which goes to the player in either league who most inspires others through his efforts on and off the field.

The 26-year-old left-hander’s career-low 1.77 ERA marked the fourth straight season he has won the NL ERA title and was the lowest in baseball since Pedro Martinez posted a 1.74 ERA for the Red Sox in 2000. The four-time All-Star also led NL pitchers with a 7.5 WAR and highlighted his season with a June 18 no-hitter against the Rockies in which he struck out 15 batters and didn’t allow a walk. He ranks first among active players with a 2.48 career ERA.

Kershaw was named the Marvin Miller Man of the Year by his peers in part because of his dominance and leadership on the mound but primarily for the efforts he makes in the community. Inspired by their relationship with a malnourished, HIV-infected girl in Lusaka, Zambia named Hope, Clayton and his wife, Ellen, began Kershaw’s Challenge in 2011. The idea of the “Challenge” is to use whatever you have been blessed with – talent, passion or purpose – to give back to others.

“To get something like this that recognizes you not only as a pitcher, but as a player, too, it’s amazing," stated Kershaw during his Player of the Year acceptance interview. "It’s something that you really got to take a step back and think about. Obviously, all of the other candidates are amazing players and just to be associated with those names is pretty awesome to have the guys respect not only what you do on the mound, but just as a player is pretty awesome and something that I definitely don’t take lightly."

While Giancarlo Stanton and Mike Trout fell short as finalists for overall Player of the Year, each won the Outstanding Player award in his league. Stanton was leading the NL in home runs (37), RBIs (105) and slugging (.555) when he was hit in the face by a pitch on September 11, ending his season prematurely. Trout, still just 23, had the best of his three standout seasons to start his career, leading the AL with an 8.7 offensive WAR, 338 total bases, 115 runs and 111 RBIs while batting .287 and hitting 36 home runs.

Five-time All-Star Felix Hernandez was named the AL Outstanding Pitcher by his peers to earn his first Players Choice Award. He led the AL with a 2.14 ERA and a 0.915 WHIP while yielding a league-low 6.5 hits per nine innings over 34 starts for the resurgent Mariners.  He won 15 games.

Jacob deGrom, a ninth-round draft pick out of Stetson University in 2010, was named the NL’s Outstanding Rookie by the players in the league.  He finished with a 9-6 record, a 2.69 ERA and 144 strikeouts in 140 1/3 innings after joining the Mets in mid-May.

AL Outstanding Rookie Jose Abreu, a 27-year-old Cuban slugger, established himself not just as a top rookie but one of the top hitters in baseball.  He batted .317 with a .383 on-base average, 36 home runs and a 5.3 WAR. He led the AL with a .581 slugging percentage and a 169 OPS+ in his first season with the White Sox.

Casey McGehee, who spent 2013 in Japan, reemerged with the Marlins this season to win the NL Comeback Player award. Hitting cleanup behind Stanton, he hit .287 with four homers and 76 RBIs and led Miami with a .319 average with runners in scoring position. His 177 hits were fourth in the NL and he led league third basemen with a .979 fielding percentage.

AL Comeback Player Chris Young battled shoulder injuries from 2009 through 2013, when he had season-ending surgery. At 35, the 6-foot-11 right-hander returned to health with the Mariners, going 12-9 with a 3.65 ERA in 29 starts and a relief appearance.

The Players Choice Awards on MLB Network, presented by PlayStation, makers of the popular MLB The Show video game franchise, benefit the Major League Baseball Players Trust, the charitable foundation created and run by the players themselves.

Players Choice Awards have been presented each year since 1992, when Major Leaguers selected Dennis Eckersley and Barry Bonds as the AL & NL Outstanding Players, respectively. Today, the players annually honor the outstanding player, rookie, pitcher and comeback player in each league, while the Player of the Year and Marvin Miller Man of the Year awards bestow top honors without regard to league.

Balloting for the 2014 Players Choice Awards was conducted in all Major League clubhouses on September 16, under the supervision of accounting firm KPMG.

2014 Players Choice Award winners in all categories will designate charities to receive grants totaling $260,000 from the Major League Baseball Players Trust.   The Players Trust raises funds and attention for issues affecting the needy and promotes community involvement.  Since 1992, the Players Trust has recognized the outstanding on-field and off-field performances of Players Choice Awards winners by contributing more than $3.5 million to charities around the world. For additional information, please visit  http://playerstrust.org/programs/players-choice-awards/.

Majestic Athletic is a proud sponsor of the 2014 Players Choice Awards on MLB Network. 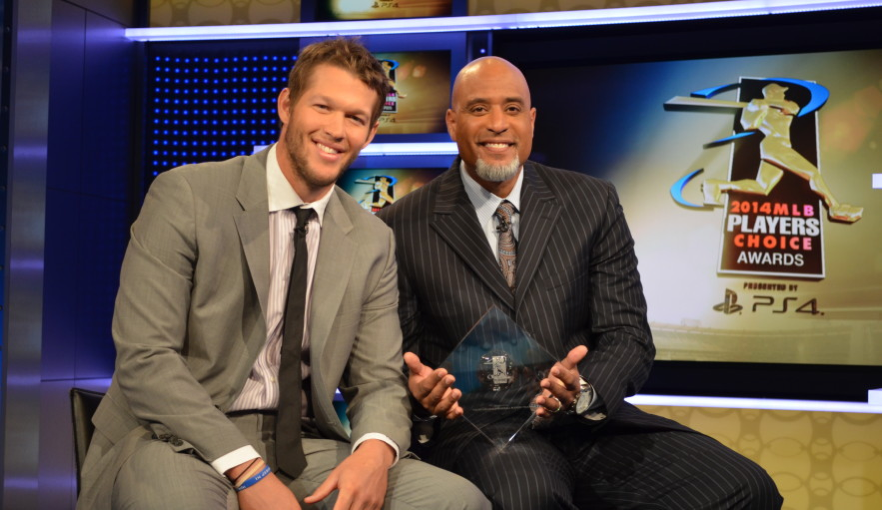