Nominations for volunteers who are creating, preserving or enhancing outdoor spaces are being accepted at CoxConservesHeroes.com through 5 p.m. EST on July 24.

Local judging panels, comprised of civic and environmental leaders, will select three finalists who then compete for Boston’s 2017 Cox Conserves Hero award. The winner, chosen through an online public vote, will receive $10,000 to donate to his or her selected nonprofit beneficiary. The two finalists each will receive $5,000 for their nonprofits of choice.

Cox Conserves Heroes was created through a partnership between The Trust for Public Land and Cox Enterprises, the parent company of WFXT Boston 25, to honor local conservation volunteers.

About WFXT Boston 25
WFXT Boston 25 provides local news, weather, sports and entertainment programming to more than 2.4 million households in the Boston television market and covers breaking news from around the area on-air and across all digital platforms including Boston25News.com. 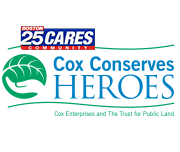