After the Structural (and Possibly Abrupt) Decline of Fossil Fuels

It has been a tough couple years for fossil fuels companies. In the immediate term, new drilling techniques and the lifting of the Iran economic embargo have opened up new supplies of oil and gas, and subsequently there has been a lot of damage to the oil price over the last year and a half. So much so, that according to The Economist, at $45 a barrel, oil is cheaper than it’s been since the first OPEC oil embargo in 1973. In real economic terms, this is about as cheap as oil has been in decades, the result of a supply/demand imbalance of nearly two million barrels a day, over about the last two years. It’s important to remember that two million barrels a day is only a shade over two percent of the daily global oil production function, showing that prices have been very sensitive to relatively minor increases in supply relative to the demand.

So today and in the recent past, times have been hard for producers and their investors, but what’s going to happen going forward?

Some, such as Chevron and OPEC’s Secretary-General, rest their thesis on the low price of oil slowing production investment, therefore causing base production to go down. Meanwhile, in their projection, demand goes up, and the two effects together lead to a $200 barrel of oil over the next decade and a half. In the short and near-medium term, this could be wrong. OPEC infighting and Iran regaining their four million barrels per day market share could conspire to keep supply on the high side. Or projections could be right, with production decreases resulting in more expensive oil.

Past that modicum of agreement, Green Alpha’s thesis is the opposite of Chevron’s.

We believe that fossil fuels are in the early stages (perhaps not so early in the case of coal) of a structural decline in demand that will ultimately result in coal, oil and gas no longer representing a meaningful percentage of the global economy’s energy mix by 2050, with investment and growth in the sector reversing long before that.

Fossil fuels may not be abandoned completely, but there is no credible scenario in which they are able to resume growth, economic superiority or a reliable pattern of risk-adjusted or even absolute returns. The two reasons for this are: 1. Renewable energies have become too economically competitive for fossil fuels to contend with, and 2. It is now widely understood that fossil fuels present systemic risks too great to be allowed to continue.

Rather than another long list of the economic advantages of renewables and the existential threats presented by extracting and burning fossil fuels, perhaps it’s more interesting to illustrate our thesis by responding to the most frequent objections that we hear. In no particular order, they go like this:

Solar and wind still aren’t cost competitive, and if they are, it’s only because of subsidies. Wrong. We now see electricity being contracted for sale at just under three pennies per kilowatt-hour on an unsubsidized basis from large-scale solar power generating plants. That’s $0.0299 per kilowatt-hour (kWh) in Dubai, which is admittedly one of the sunnier places in the world and therefore particularly advantageous for solar, but we also see right here in the United States that we are not far behind; San Jose, California, for example, has recently signed a solar power purchase agreement for 3.7 cents per kWw, which is competitive with any form of fossil electricity and cheaper than most. Wind, although not declining in price as rapidly as solar, is for now even cheaper. A 2015 report from analysts at Lazard Freres, as cited by Politifact, shows “the cost of wind production in Texas, not counting government subsidies, runs from $36 to $51 per megawatt-hour (Mwh) while an average national cost for coal-fired electricity ranges from $65 to $150 per MWh and for gas, depending on the type of plant, from $52/MWh to $218/MWh.”

Related: but solar isn’t growing very fast. You’re kidding, right? Solar is one of the world’s fastest growing industries. In a record-breaking year, the solar industry in the United States installed 7.3 gigawatt (GW) of solar PV (Photovoltaic) in 2015, and is poised to grow 119 percent in 2016, with installations to reach 16 GW. Entirely eclipsing this achievement, China just added 7.1 GW of new solar PV capacity in Q1 2016 alone.

Oil producers don’t agree that there is a decline going on. Right and wrong. Chevron and Exxon Mobil both do see oil demand going up in the next couple of decades, but the Deputy Crown Price of Saudi Arabia thinks the oil era will end, and is working hard on a transition plan to make his country much less dependent on fossil fuels revenues. He also has Bloomberg writing about “The $2 Trillion Project to Get Saudi Arabia’s Economy Off Oil.”

But if fossil fuels companies continue to do poorly, the economy will tank. Right and wrong, but mostly wrong. Yes, oil and gas firms have gone from boosting U.S. GDP (Gross Domestic Product) growth to reducing it, and recent GDP-by-industry numbers show that the oil and gas industry has continued to drag down GDP. Meanwhile, though, cheap oil and gas prices, combined with inexpensive renewables, are making most everything else in the economy far more productive and inexpensive. It’s important to keep in mind, as Jeremy Grantham has written, “The consumers of both oil and natural gas account for far more of U.S. economic activity than the producers do. For consumers, cheap energy is good. So eventually, whatever drag the oil and gas industry’s troubles exert on the economy should be more than compensated for by gains in other sectors.” Indeed, according to Bloomberg, “Bank of America Merrill Lynch…puts the oil move into a much bigger perspective, arguing that a sustained price plunge “will push back $3 trillion a year from oil producers to global consumers, setting the stage for one of the largest transfers of wealth in human history.”” For context, again, Grantham: “Could there be a better financial input than this to the group that has been hurting for 30 years – the median wage earner? Not easily.”

Natural gas releases fewer greenhouse gasses than coal and can therefore be used indefinitely. Wrong. Yes, burning natural gas to make electricity releases less CO2 into the atmosphere than burning coal does, but the process of extracting, transporting and using natural gas releases far more methane into the atmosphere than does coal (which mainly releases CO2), — and methane is a far more powerful trapper of heat than CO2. In fact, many scientists think natural gas is worse than coal in global warming terms. Methane has a shorter life-span in the atmosphere than CO2, so the debate about which is worse in long-haul warming terms is difficult to resolve, but in the short term – meaning under a Century — “methane emissions from fracked shale gas are horrendously high; so yes, it’s unequivocally worse for the climate than is coal,” says Cornell University’s Robert W. Howarth, as quoted by Politifact, in a solid summary of points trying to get to the bottom of this issue. So natural gas is at least as bad as coal in terms of warming, and maybe much worse. Of course, both fuels present other risks as well, like mercury and soot pollution in the case of coal, and groundwater and aquifer contamination in the case of natural gas fracking.

But natural gas is the fastest growing energy in America. Nope, it’s being outpaced by renewables 2-to-1. In 2015, solar and wind together represented 69 percent of new electricity generation capacity additions in the U.S. New U.S. electrical capacity from wind and solar in January 2016? One hundred percent. According to data cited by Joe Romm, “in the first three months of 2016, the U.S. grid added 18 MW (Megawatts) of new natural gas capacity. It added a whopping 1,291 MW of new wind and solar.

Read Garvin's complete article with his overall wrap up and a vital list of footnotes at-  http://www.greenmoneyjournal.com/july-august-2016/the-structural-and-possibly-abrupt-decline-of-fossil-fuels/

Article by Garvin Jabusch, co-founder and chief investment officer of Green Alpha®Advisors, LLC  (www.greenalphaadvisors.com). He is co-manager of the Shelton Green Alpha Fund [NEXTX]  and of the Green Alpha Next Economy Index and of the Sierra Club Green Alpha Portfolio. 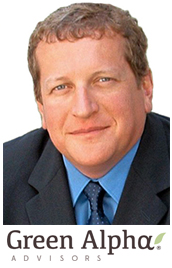