The Sustainability Report 2016 follows A.P. Moller - Maersk’s continued work to unlock growth through their business, while operating responsibly and sustainably. The Report details the changes made on the ground at shipyards in Alang, India, progress on activities to create shared value by enabling trade, and a special feature on responsible tax.

In 2016, A.P. Moller - Maersk sent two vessels for recycling at the Shree Ram, plot 78 yard in Alang, India, as part of an effort to break the stalemate in global ship recycling. A.P. Moller-Maersk has been criticised for the decision to engage with facilities to make responsible ship breaking available in Alang. While they recognise the concerns expressed, the Sustainability Report details the progress made for workers and the environment in the collaboration with Shree Ram and other yards in Alang.

2016 saw a flattening of relative CO2 reduction across A.P. Moller-Maersk. The relative reduction was 25%, compared to the 2010 baseline. Maersk Line, which accounts for more than 80% of Maersk’s total emissions, leveled off at a 42% relative reduction compared to the 2007 baseline. It is becoming increasingly challenging for individual companies to continue to drive significant improvements in CO2 efficiency on their own. It is A.P. Moller - Maersk’s position that the shipping sector now needs global regulation and standards to drive further significant reductions.

While opposition to trade and globalisation increases due to concerns over inequality, Maersk continues to work with partners to still include more people and smaller businesses in global trade. Progress made in 2016 includes:

A.P. Moller - Maersk continues to integrate sustainability into operations. Performance highlights in 2016 include:

In a complex world, transparency is a prerequisite for building trust, and the Sustainability Report 2016 includes a special feature on how A.P. Moller - Maersk pays tax and their position and practices on a number of hot topics on the responsible tax agenda.

For those with an interest in the technicalities of working with sustainability, the Report describes A.P. Moller-Maersk’s innovation in the approach to determining materiality. Moving beyond the matrix, Maersk now approaches and assesses issues according to their dominant features as shared value opportunities, risks or responsibilities, in order to achieve greater granularity and understanding.

The A.P. Moller - Maersk Sustainability Report 2016 is released at a time of change for the company and the industries in which it operates. A new strategy launched in 2016 means A.P. Moller - Maersk will focus on global transport and logistics in the future. It is the intention that the oil and oil-related businesses will be separated from A.P. Møller - Mærsk A/S. The commitment of all businesses within A.P. Moller - Maersk to sustainable and responsible business does not change, and they remain committed to the principles in the United Nations Global Compact. 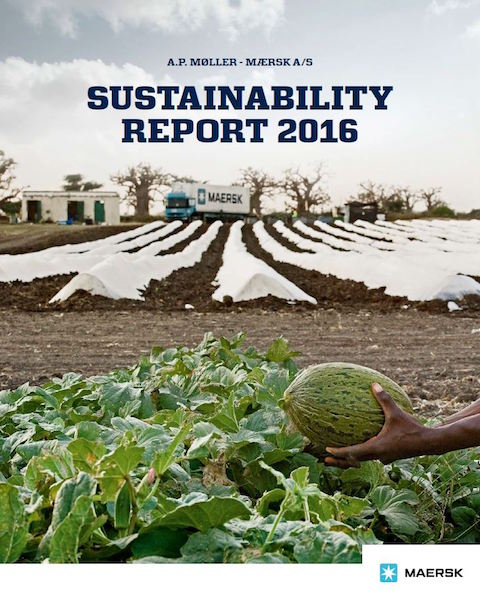