It’s thick and sticky like peanut butter and there’s lots of it. Please don’t call it “dirty oil” (crude is never clean), but fuels derived from Canada’s tar sands do produce more greenhouse gas than conventional forms of gasoline and heating oil. Called “oil sands” by petroleum executives and “bitumen” by geologists, it’s the stuff that would flow through the Keystone XL pipeline from Alberta to Gulf Coast refineries. An angry debate over its effect on the environment has played a big role in the dispute over whether U.S. President Barack Obama should approve the pipeline project. The State Department, which issues permits for cross-border pipelines, concluded in a January 2014 report that the pipeline wouldn’t have a “significant impact” on climate change. The project’s opponents disagreed. Republicans, now in charge of the House and Senate, say they’re tired of waiting for Obama to decide. On Feb. 11, they passed legislation to approve the pipeline. Obama has said he will veto it. While the argument raged, expanding use of trains and competing pipelines made Keystone XL less important to oil companies.

Alberta’s copious bitumen deposits let Canada claim the world’s third-largest recoverable reserves of crude oil. More tar sands crude enters the world’s oil supply every year, but the proportion is still small, about 2.3 percent. Because there’s so much less of it than conventional oil, coal and natural gas, oil from Canadian tar sands accounts for 0.1 percent of the world’s greenhouse-gas emissions and has a smaller potential to warm the planet than other fossil fuels. A gallon of fuel produced from tar sands bitumen releases 8 percent to 37 percent more carbon than conventionally produced fuel, according to a study by the Pembina Institute. The industry and the Alberta government say oil sands producers release 6 percent more greenhouse gas into the atmosphere. That’s partly because it takes more energy to extract and refine bitumen than lighter forms of crude.

Governments are restricting the production and use of fuels that release carbon dioxide into the atmosphere to slow global warming. California in 2007 enacted the world’s first low-carbon fuel standard. It was intended to reduce the carbon intensity of the state’s transportation fuels by 10 percent by 2020. Canada and Alberta, which produces a third of the country’s greenhouse gas emissions, are failing to meet their own carbon reduction targets as production soars. In December, Alberta’s premier, Jim Prentice, delayed making changes to provincial carbon emissions rules until June, as plummeting oil prices threatened the profits of energy producers.

Environmental groups say that more bitumen production will lock in dependency on oil for decades and delay a transition to renewable energy. The two sides also quarrel over the best way to compare emissions from tar-sands to those from other pollutants. Oil producers say coal plants pump much more carbon dioxide into the atmosphere. Environmentalists say the appropriate comparison is to conventional oil because, unlike coal, both kinds of crude are primarily used to make transportation fuel. Stopping Keystone XL would slow tar sands development, the environmental groups say, while pro-Keystone forces argue that the bitumen will be produced and shipped either by other pipelines or rail, increasing the risk of spills and other accidents. Since the beginning of 2012, rail shipments of Canadian crude to the U.S. have risen 11-fold. And while the battle over Keystone XL raged, operators doubled the capacity of the Seaway pipeline, allowing more oil-sands crude to reach Gulf refineries. 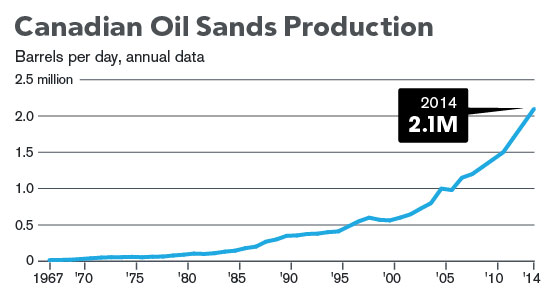 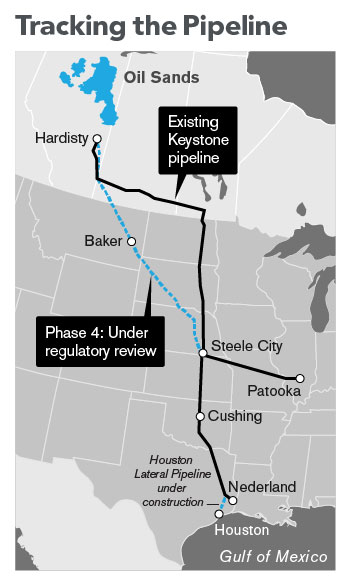