A day after California imposed mandatory water restrictions to battle a four-year drought, a new study on global warming suggests the worst is yet to come.

The average number of days with temperatures higher than 95 degrees Fahrenheit (35 degrees Celsius) may double or even triple by the end of the century, threatening one of the world’s richest agricultural regions. At the same time, $19 billion in coastal property will likely disappear as sea levels rise, the study found.

The report is the third from the Risky Business Project, a nonprofit partnership of Bloomberg Philanthropies, the Paulson Institute and TomKat Charitable Trust. It suggests California can reduce these risks if policy makers and business leaders cooperate to reduce emissions driving global warming and adapt to climate change.

“While state action alone will not be sufficient to avoid the worst impacts of climate change, California can be a model of climate leadership for the nation and the world,” the report said.

According to the Risky Business report, rising temperatures will mean more frequent wildfires, increased respiratory problems due to worsening air pollution and higher heat-related mortality. California likely will have almost 7,700 annual deaths linked to heat by late century. The research was conducted by the Rhodium Group, a New York-based research company.

Rising sea levels affecting the 840-mile (1,350-kilometer) California coast may also cause billions of dollars of losses to waterfront property and infrastructure. Melting ice sheets and glaciers in the polar regions and Greenland are helping increase the volume of liquid water in the oceans. Sea levels have increased by 49 millimeters (1.9 inches) this century, according to the National Aeronautics and Space Administration.

As warming weather shifts more precipitation from snow to rain, California’s snowpack -- already at just 6 percent of normal -- will shrink further, according to the Risky Business report. Melting snow provides a significant portion of the state’s water throughout the year.

About 80 percent of California’s water goes to its $48 billion agriculture industry, which supplied almost two-thirds of U.S. fruits and nuts in 2012 and more than one-third of the country’s vegetables. The report predicts “a dramatic increase in extreme heat,” especially in the San Joaquin Valley that’s home to much of the state’s farming, and the Inland South area.

“By the end of this century, summers in California will likely be hotter than summers in Texas and Louisiana today,” the report said.

“California faces a new set of challenges and opportunities” with $8 billion to $10 billion of existing property in the state likely “underwater by 2050, with an additional $20 billion at risk during high tide,” it said in an executive summary. “By 2100, $19 billion in coastal property will likely be below sea level” and there’s a 1 percent chance that more than $26 billion will be at risk.

The Risky Business Project was founded in 2013 to focus on quantifying economic risks from a changing climate. The project’s co-chairs are Michael Bloomberg, majority owner of Bloomberg LP, the parent company for Bloomberg News, Henry Paulson and Tom Steyer. 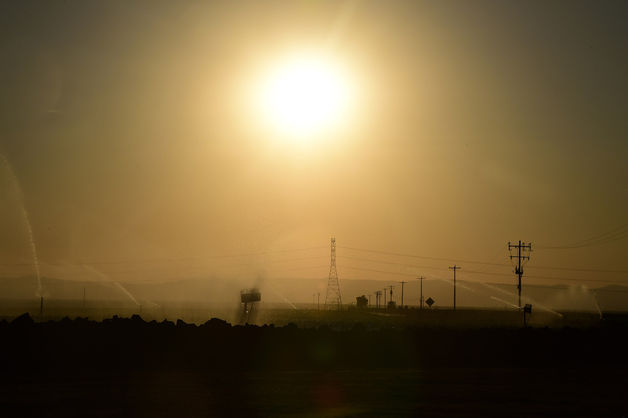