An electric aircraft motor unveiled by Siemens in 2015 is a true powerhouse. Weighing only 50 kilograms, it generates 260 kilowatts of power, resulting in an unprecedented power-to-weight ratio. And that’s not the only reason it will make aviation history. Siemens experts also installed the motor and its entire power train into a two-seater aircraft, the Extra 330LE.

“This first flight is a milestone in the history of electric aviation drives,” says Frank Anton from Corporate Technology (CT), Siemens’ central research and development department. Anton and his team got the first electric airplane with an output of one fourth of a megawatt airborne, and they did so in accordance with the flight conditions of the European Aviation Safety Agency and a permit-to-flight from Germany’s Federal Aviation Office.

Milestone in Aviation History
The plane lifted off from an airfield in north-central Germany near the town of Hünxe and landed safely after ten minutes of flight. Since then it has undergone several test flights, meaning that Siemens now has an air-worthy electric motor in the medium-power class. The project is also very special for Extra, the aircraft builder. “We’re proud that one of our aerobatic aircraft has flown for the first time on an electric motor,” said company founder and managing director Walter Extra.

Aerobatic Aircraft: Ideal for Testing Electric Motors
Why is Siemens interested in an aerobatic aircraft? This kind of aircraft is especially well suited for testing electric drive systems. That’s because it is robust enough to take the power train to its limits in flight by making sharp accelerations on all three axes. In coming years, the plane will be ideal for analyzing and refining how its components work together.

The aircraft features the SP260D electric motor and an inverter from Siemens, plus battery blocks from Pipistrel, a Slovenian company. The propeller was made by MT Propeller, a Bavarian company. Siemens developed the SP260D motor in cooperation with its partner Grob Aircraft. The project was subsidized by the German Federal Ministry for Economic Affairs and Energy as part of the German Aviation Research Program.

In order for these drive components to be installed, the aircraft had to meet several conditions. “One condition was that it must be a very robust machine in the category of fully certified aircraft that can carry as much weight as possible,” Anton explained. The solution was a production aircraft equipped with a tubular lattice frame designed to make it easier to install components and modify them at any time.

Powerful Enough for Regional Flights?
Extra Aircraft is not the only partner Siemens is working with in its quest to electrify aviation. It is collaborating with other medium-sized manufacturers on pilot projects to raise awareness of the practical benefits of electrical drive systems. In April 2016, for example, a two-seater training aircraft called the Magnus eFusion successfully took its maiden flight. The plane will be used to explore how battery systems can be adapted to serve the needs of electric aviation. In addition, Siemens und Airbus are pursuing a much larger-scale cooperation project: The two companies want to prove the technical feasibility of hybrid-electric drive systems for regional flights for up to 100 passengers by 2020 – a development that will require power classes as high as 10 megawatts.

Why the Environment Needs Electric Drives
“We are convinced that electric drives will become irreplaceable in aviation,” says Anton. Driving his optimism is the fact that the European Commission wants to lower total CO2emissions in aviation by up to 75 percent by 2050. The only way to achieve this in the face of steadily increasing air traffic volume is through the implementation of new technologies.

The solution is the electrification of aviation. “Hybrid-electric drive systems drive propellers or ducted fans electrically and generate power with gas turbines that can be optimized for constant travel performance,” explains Anton. Additional battery power can be used for ascent.

This concept separates energy conversion from thrust generation, which yields new possibilities for aircraft development because the central energy conversion system and the distributed electrical thrust generation system can be optimized individually. The savings potential of such systems is enormous: Siemens experts expect that it will be possible to reduce fuel consumption and pollutant emissions by up to 50 percent.

Furthermore, electric aircraft are much quieter than conventional aircraft. This will benefit not only those who live near airports but also flight operators, because quiet drive systems may make it possible to offer evening and night flights that are now banned for noise reasons. This could significantly increase aircraft capacity utilization and therefore the profitability of business models.

The Siemens experts want to continuously improve the power density, efficiency and reliability of their components. But their motivation goes beyond just optimization; they always visualize the maiden flight of their drive system on the horizon. German aviation pioneer Otto Lilienthal described this aspiration as follows: “It means little to invent an aircraft, more to build one, but flying one means everything.”

In view of the many potential advantages of the electrification of aviation, research in this area will be one of the first projects for Siemens’ new next47 unit, which is designed to foster disruptive ideas and speed up the development of new technologies. 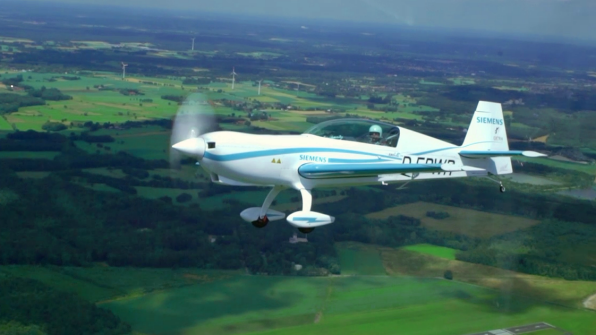 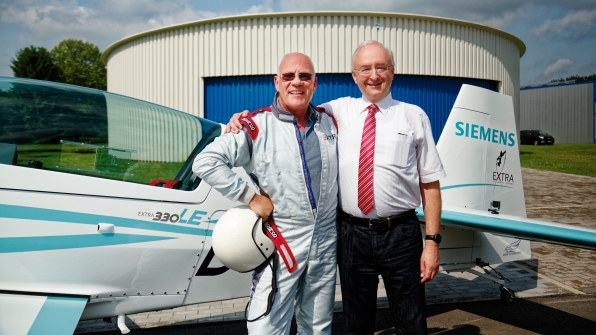