From Down-And-Out to Up-And-Coming

Just a year ago, the tiny Bronx Academy of Promise charter school was struggling to keep its doors open. Given a Grade F rating from the New York City Department of Education in 2011, it was on the verge of closure, jeopardizing the futures of more than 300 elementary and middle school students.

Failure was not an option. With new Principal Catherine Jackvony at the helm, and teachers determined to keep students in school, the staff of the Bronx Academy made a commitment to change course and turn to technology as one of their solutions. The school hired Jennilee DeHoyos to introduce technology at the elementary school level and began integrating mobile technology in the classroom to help spark excitement in subjects from English to Math. Each classroom was equipped with a desktop computer and the school provided a laptop cart so students could borrow them to complete class assignments. During lunch, students were encouraged to play educational games on the computers. Teachers used their own personal tablets for lessons. Within a year, the Bronx Academy received a Grade A rating. But that was only the beginning for 6th grade students King, Sherly, Michael, Rokia, Jhony and Samuel.

Motivated by this transformation and fueled by the belief that the mobile devices had sparked a renewed excitement around learning in her classes, the school’s 5th grade teacher, Tammi Trudel, began to explore new ways to keep the academic momentum building. She discovered the Verizon Innovative App Challenge, a competition that invited middle school and high school students from all over the country to create concepts for mobile apps that would solve problems in their schools or communities. The contest’s goal was to increase student interest in science, technology, engineering and math (STEM), and open students’ eyes to the vast and exciting career opportunities these areas offer. Each winning team would earn a $10,000 grant for its school, free Samsung Galaxy Tablets for each team member, and an opportunity to work with the best app developers from the Massachusetts Institute of Technology (MIT) Media Lab App Inventor Training Corps and bring their app from concept to reality in the Google Play Store. Ms. Trudel and her colleague, 6th grade teacher Erica Silvestri, presented the contest to their classes. A group of students, King, Sherly, Michael, Rokia, Jhony and Samuel, who were already part of an afterschool Greek mythology club, eagerly stepped up to the challenge.

But there seemed to be a problem—The students asked Ms. Trudel and Ms. Silvestri how they could possibly enter a technology contest when most of them did not own smart phones or tablets. At home, only one student on the team had his own smart phone. The teachers assured them that the contest did not require the use of technology to design app concepts; it was only an option. So the kids grabbed what supplies they had – pens, colored pencils, paper and their imaginations – and went to work.

As kids themselves, the team knew some of their classmates got bored easily when doing math problems the traditional way. “Learning can be boring with just pencil and paper,” said 11-year-old King. They also knew kids their age liked Greek mythology. So they combined their love of Greek mythology and math to design the “Quest Math” app, which would help students improve math skills and increase basic math computation speed through a fun, Greek mythology-themed game.

“Technology is more advanced and lets you work faster and look up information in class,” said King, when explaining how he hoped their app might help students. “It can also help you be a more independent learner because when the teacher is busy with another student, you can look up answers on computers or tablets.”

The existing curriculum did not allow any class time for students to work on their App Challenge submission, so the project had to be done outside of school hours. Ms. Trudel and Ms. Silvestri made it clear that school assignments and tests were the priority, but this did not deter the students. The Quest Math team started spending time after school working on their App Challenge design. The students soon realized that they needed even more time, so they asked Ms. Trudel and Ms. Silvestri if they could also work on their project before the start of the school day. Because of their determination and dedication, the teachers made the classrooms available when the students needed them.

Throughout the process, as 12-year-old Samuel said, “The App Challenge took math to a whole new level.” He wasn’t alone. 11-year-old Rokia learned that “technology can help people and the world in many different ways,” and that “math is more than just numbers.”

The Quest Math team worked around-the-clock to ensure the design they submitted was their best work. This past January, they submitted their concept to Verizon and waited for the national winners to be announced.

On the morning of March 18th, the Quest Math team arrived at school and turned on their classroom computer to see if the App Challenge winners were posted online. To their disappointment, a list of winners was nowhere to be found, so they went about their school day.

But in the afternoon, while sitting in their math class, a crowd of people and cameras from Verizon interrupted the lesson and surprised King, Sherly, Michael, Rokia, Jhony and Samuel with the announcement that out of 470 submissions from across the country, their Quest Math app design was chosen as one of the national winners of the App Challenge.

The students said they felt confused and nervous at first, but then excitement overcame them. Jhony and King were so thrilled they jumped out of their seats and knocked down their chairs.

It was a proud moment for the teachers as well. The Bronx Academy had never entered a national contest like this before, and they were ecstatic with the news that they had won on their first try.

The Quest Math team is now working with MIT app development trainers to build their app. The Quest Math app is scheduled to be completed and available for free download in the Google Play store this fall.

Furthermore, the contest has had a profound impact on the students that will last long after Quest Math hits the market. As for King, he admits that before the App Challenge, he was not really interested in technology, but because of it, he now has a better understanding of what pursuing a technology career in college, might look like. Eleven-year-old Sherly said, “My future has been decided for me. Because of the App Challenge, I now want to be an app designer.”

The experience is one that has changed these 6th graders in a dramatic way, opening their eyes not only to the exciting opportunities that STEM offers, but also to the notion, as King says, that if you “put in the work, you can accomplish anything you want.” 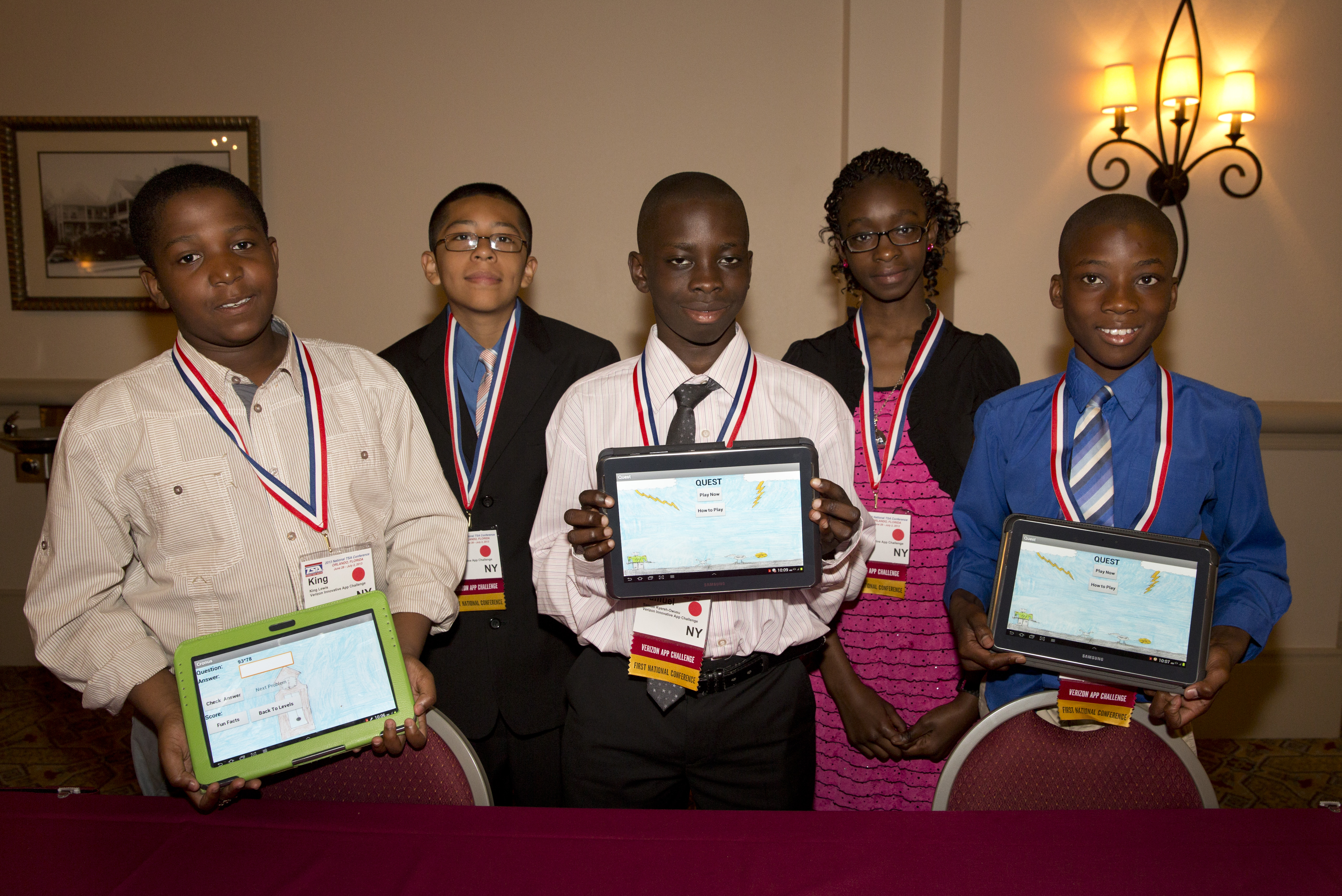