Paving the Road for the Future of Transportation

Mark Frohnmayer had a pretty specific checklist when he was looking to buy an electric car a decade ago. He wanted a vehicle that suited his travel needs, boasted a premium build quality and helped move the needle in terms of climate change.

Frohnmayer couldn’t find such an automobile, so he took matters into his own hands and founded Arcimoto in 2007.

In 2016, the company unveiled its eighth-generation prototype, the SRK. It’s a three-wheeled vehicle with two electric motors and two seats. The design resembles a futuristic hybrid of a motorcycle and a sports car.

It weighs 1,000 pounds, a fourth of the average 4,000-pound car; has a handlebar instead of a steering wheel; and can zoom along at a top speed of 85 miles per hour.

The entrepreneur from Eugene, Oregon, showed off the SRK at this year’s Consumer Electronics Show and says that series production will kick off near the end of 2016. The expected base price: $11,900.

For now, the SRK is as much a forward-looking transportation solution for the mass market as it is a statement about how entrepreneurs and major carmakers are coming up with new ideas for sustainable vehicle design. They’re finding that the key is to be creative and flexible.

Since 2009, car buyers in the U.S. have purchased about 400,000 electric and plug-in hybrid vehicles. That number falls short of expectations. What does this mean for innovation?

There has been plenty of attention given to some fancier types of electric vehicles, like Tesla Motors models, but those don’t necessarily suggest the future of the form.

For some, the plan is to go small. The Massachusetts Institute of Technology’s (MIT’s) Mobility-On-Demand project, for example, has been working to develop and test concepts that can replace traditional cars in compact neighborhoods to help cut down on traffic congestion, air pollution and energy consumption.

The CityCar, a foldable, electric two-passenger vehicle meant for people-packed cities, is one such concept.

It weighs less than 1,000 pounds and gets the equivalent of 150 to 200 miles per gallon of gasoline. It’s powered by four in-wheel electric motors.

Size was a big factor when Frohnmayer designed his Arcimoto SRK. He says his goal is not to change how people use vehicles – he just wants to offer the right-sized product to reduce urban footprints on asphalt.

“When you sit on a busy street corner and see 4,000 pounds of steel driving by over and over, you realize something’s wrong with this [transportation] model,” he says. “It’s so wasteful.”’

When it comes to industry successes so far, Peter Harris, director of sustainability for Europe at UPS, says plug-in hybrids and range-extended electric vehicles are the biggest breakthroughs.

“It only really has been in the last decade that the battery energy density, battery cost per kilowatt-hour and control technology sophistication have allowed this innovation to become viable at scale,” Harris says.

“We are seeing this now in the car market, but it also has great potential for urban logistics because it opens up the potential to operate urban electric vehicles outside of the range of a pure electric vehicle.”

Harris cites UPS’ range-extended electric vehicle prototyping in Barking, England. The auto in that trial – which UPS created along with Tevva Motors – can travel farther than a pure electric car because it carries on board a small engine that acts as a generator to recharge the batteries when needed.

The engine is telematically controlled so that the vehicle can be operated as a pure electric auto in the urban environment and then recharged on its way to and from the city.

And because the engine does not directly drive the wheels, it can be downsized to meet average rather than peak power demand, and to run at optimum speed. Both reduce carbon emissions further.

These prototypes are among the things being worked on in UPS’s Rolling Laboratory, a fleet of vehicles that is used to test sustainable transportation solutions in different areas. It provides insight into new ways of delivering packages in cities, rural areas, suburbs and long-range destinations using alternatives to petroleum-based fuels.

Sustainable transportation efforts like these are the result of several issues that concern small companies, big automakers and the academic community.

Chief among them are the race to confront climate change and a desire to fix overly congested cities with their associated insufficient transportation options.

Incentives that can change car-buying and -driving behavior are also part of the equation.

For example, Georgia once ranked second among U.S. states in electric car ownership thanks in large part to a $5,000 tax credit for buyers of new zero-emission vehicles. However, after lawmakers voted to remove the credit in 2015, sales fell by about 90 percent. Today, 29 states offer some kind of incentive for buyers.

Businesses and localities are making impacts, too. Home improvement retailer Lowe’s is working to replace all of its diesel-powered dedicated fleets with natural gas trucks by the end of 2017.

In March, London added new all-electric double-decker buses to its fleet. The city is starting with five emissions-free vehicles equipped with battery packs that provide for 190 miles of driving.

Experts are both prescriptive and hopeful about what comes next. A study by the International Energy Agency found that if annual sales of plug-in electric vehicles get to half of the sales of new cars and trucks by 2050, that would cut global carbon dioxide emissions from light-duty vehicles by about 30 percent.

Obstacles on the road to success

Still, the progress of sustainable transportation could experience speed bumps.

For one, current low oil prices aren’t helpful in steering consumers to sustainable vehicle options, says Dr. Tim Lipman, co-director of the Transportation Sustainability Research Center in the Institute of Transportation Studies at the University of California, Berkeley.

Dr. Joan Ogden, an associate professor of environmental science and policy at the University of California, Davis, cites “range anxiety” – a person fearing that their charge will run out before they reach their destination – as another deterrent among potential electric car consumers.

This issue will remain as long as there’s no significant infrastructure available for drivers to quickly and conveniently recharge.

She also says urban and rural areas have distinct transportation paradigms that are likely to defy a universal solution for both.

People in rural areas often need to drive longer distances that surpass the current range of most electric battery vehicles, and they usually lack a robust battery-charging infrastructure near their homes.

Charged up for success?

Electric vehicles are a better fit for compact cities right now, but the challenge is for urban planners to persuade more people to use them. There are groundbreaking ideas coming from Europe to meet this challenge.

Ogden recalls attending a conference in Oslo, Norway, a year ago and notes that the city offers perks such as free parking, charging and use of bus or taxi lanes for owners of electric vehicles.

“Having an electric vehicle seemed kind of like having a key to the city,” she says.

There are important hurdles to pass before the promise of sustainable transportation can be fulfilled.

However, as more companies go all in and bold ideas get ironed out, there could start to be a real reduction in vehicle prices and an increase in sales.

“You need to get up to tens and hundreds of thousands of units a year to get the cost of these vehicles down,” Ogden says. “The net benefit is large and positive once you go through the transition stage. I think it’s a future worth going for.”

This article originally appeared on The Guardian on May 17, 2016, and was republished with permission.

Header photo: The 1,000-pound, three-wheel SRK, made by the startup Arcimoto, is expected to begin production in late 2016. Credit: Arcimoto 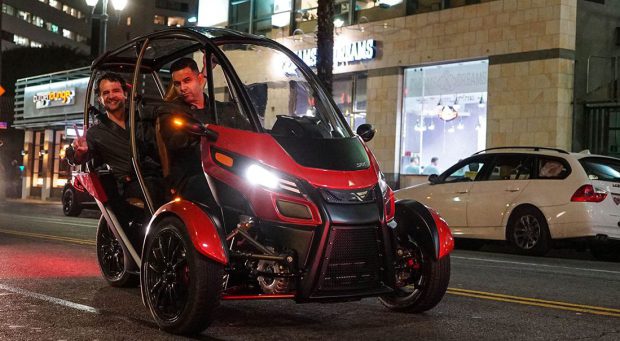