The Politics of Energy: Change or Be Changed

Human nature often resists change. We struggle with moving from familiar surroundings to new, unknown territories. Yet, when it comes to the greatest single challenge we face today, our resistance to change will surely cause massive, uncontrollable, and unforeseeable changes.

Climate change is upon us. We know with certainty that our behavior is impacting the planet we inhabit. The last time atmospheric concentrations of carbon dioxide were this high was millions of years ago, long before Homo sapiens appeared. This places us in an entirely new era of risk, for which we have no precedent or reliable benchmark.

The increasing reality of climate change attributable to the burning of fossil fuels and the speed of changes to our planet has been well documented. The level of carbon dioxide in the atmosphere is now increasing rapidly and has grown from 315 parts per million in 1960 to 402 as of January 2016. Moreover, the annual growth rate of carbon dioxide concentrations in the atmosphere is increasing, from approximately 1 percent in the 1960s to about 2 percent since 2010.

Because the oceans absorb carbon dioxide from the atmosphere, their chemical make-up is also altering. The oceans absorb 24 million metric tons of carbon dioxide each day, which has resulted in an overall 26 percent increase in the acidity of their waters since preindustrial times. Acidification of the oceans is currently increasing at ten times the rate of any period of time in the past 55 million years.

The increasing levels of carbon dioxide and other greenhouse gases in the atmosphere are resulting in a warming of the Earth. Since 1901 the average temperature in the 48 contiguous United States has increased at the rate of 0.14 degrees Fahrenheit per decade. Since the 1970s this rate has increased to 0.46. Seven of the 10 warmest years on record have occurred since 1998. Globally, 2015 was the warmest year on record.

According to the Intergovernmental Panel on Climate Change, these changes are due to human activity and in large part due to the burning of fossil fuels. These climate changes have made our current consumption levels of fossil fuels unsustainable. One hundred and ninety five nations gathered in Paris to establish a 2 degree Celsius ceiling on global warming, with an aspirational goal of 1.5 degrees. Plans are underway to reduce carbon emissions as soon as possible. The shift away from fossil fuels is underway. And we must act with haste.

Climate change is the ultimate systemic risk. Its potential impacts will be global and will be disproportionately afflicted on the most vulnerable members of our civilization. Its profound disruptions will result in the indiscriminate extinction of species. Those who are most vulnerable to the changes brought on by climate change will be those who have least contributed to it.

Sociologist C. Wright Mills believed that we are not destined by inevitable fate, but rather, by individual actions and that although each of these actions may seem of small consequence, in total, they result in “a way no man intended.” But, we are not passive pawns on a global stage of inevitable fate. We must purposefully use our individual actions for collective good, rather than allow ourselves to drift along, or more frighteningly barrel along, into unintended consequences. Our actions can be of both large and small scales. We can support the decision-makers of the 195 nations that have vowed to cut carbon emissions as expeditiously as possible while at the same time limiting our own personal consumption. We can encourage utility companies to seek renewable energy sources while we investigate whether solar power is a viable option for our own homes. We can call for a carbon tax while considering an electric vehicle for our next automobile purchase. And we can harness the power of our investment accounts to help advance the changes needed in the energy sector.

As a registered investment adviser, for many years, we at Domini Social Investments have incorporated concerns about the environmental risks of fossil fuel production into our investment decisions, our shareholder advocacy and our public policy work. Since the inception of our first mutual fund in 1991 (Domini Social Equity Fund), we have never held coal-mining companies. In the past, we approved few major integrated oil companies, and we now exclude all owners and producers of oil, natural gas or coal reserves from our funds. We made these decisions in light of the financial, environmental, and moral concerns associated with fossil fuels and in recognition that an increasing portion of the responsible investment community has found divestment a productive avenue to further debate on climate change.

Among the most powerful arguments for the effectiveness of divestment campaigns is the promotion of the public debate and resulting influence on public policy. This was particularly true in the South Africa divestment campaign of the 1970s and 1980s. The short-term goal was to improve corporations’ race relations under apartheid, but its ultimate goal was the orderly dismantling of the apartheid legal system itself. The debates that this divestment provoked were particularly high profile, receiving wide press coverage, and decisions to divest contributed to a general global pressure upon the South African government to reform. It is the role of orderly debate that leads to change, despite entrenched interests or long-standing opposition; that is one of divestment’s greatest virtues.

The unique nature of the climate change threat requires us all to think differently. We must not continue down the “business as usual” path. To ensure a safe, healthy planet, roughly 80 percent of current fossil fuel reserves must stay in the ground. Owning fossil fuel companies in our investment portfolios implies that we are hopeful these companies will prosper in the future. However, the oil majors have told us they are committed to an imprudent path. Both Exxon Mobil and Shell deny that their reserves, that is, the fuel they’ve discovered but is still in the ground, will be stranded. According to Carbon Tracker, “Exxon has come clean that they are betting on 6 degrees of warming….” As investors, we must reject such behavior; our portfolios and our planet depend on it.

Although our instinct is to resist change, life often teaches us that change is good. Let us heed these lessons. We can sit idle and let energy create a future of chaos and disruption, or we can choose to change the future of energy. The choice is ours, collectively and individually.

Carole M. Laible is responsible for the overall operations of Domini Social Investments, including both research and mutual fund operations. She serves on the Domini Standards Committee to define, clarify, and implement Domini’s Global Investment Standards. In addition, she maintains a non-voting seat on Domini’s ESG investment committee. She plans, organizes, and is responsible for the implementation of day-to-day activities of Domini, and collaborates with Amy Domini, Chair, in the development of overall business strategy and business plan implementation. Ms. Laible played a key role in the launch of the Domini International Social Equity Fund, as well as, the current investment strategy and sub-manager selection for the Domini Social Bond Fund and the Domini Social Equity Fund.

Ms. Laible joined the company at its inception in November 1997, after more than ten years of experience in the mutual fund industry. After serving for several years as Domini’s Director of Finance and Compliance, Ms. Laible became Chief Operating Officer and then President. Ms. Laible holds a B.S. in accountancy from St. John’s University and is a Certified Public Accountant. 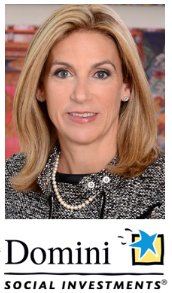