The idea arose in 2004 after a party we had thrown. And unlike so many other ideas that are born after a party (or during it), this one actually became reality. It all started when one of us raised the question of why we actually return empty bottles to the supermarket. To get a refund for the deposit (in Germany the deposit system is quite big) or just to get rid of some unwanted waste? For us, the answer was the latter and that’s how the idea of donating deposit slips was born.

We took immediate action, designed a box and tested the idea in Berlin where customers could donate their deposit slips in local supermarkets. The test worked well and it soon became our first project with multiple partners. In Berlin, the charity “Berliner Tafel” alone uses 100 of our boxes for its fundraising and raises €100,000 a year that way.

We were just a group of students who wanted to make a difference and put something back into the community. None of us could have known at the time how big this would become. Fast forward almost ten years and we even have a major global player like FedEx as a partner. Who would have believed that? But I will come back to that later on.

After our first idea proved to be such a big hit we were keen to keep up the good work. The next big project came about from to the fact that Raul, the co-founder of Sozialhelden (meaning “social heroes”), uses a wheelchair. He often found it really tough to find places he could access. A lot of bars, cafés and other public places only have stairs at the entrance and no dedicated ramp for wheelchair users.

In 2009, we had the idea to create an online map where everyone who has this access need could publicly exchange information on the places that are accessible to wheelchair users. We wanted to make our system as user friendly as possible and used a traffic light system (yes / limited / no) to identify locations according to their access properties. This is how Wheelmap.org came about. We asked people in our network to add and mark places on the map, providing information on their wheelchair-accessibility. Within a just few weeks, we scouted out 5,000 different locations. This milestone called for a celebration!

Nowadays wheelchair access to some 360,000 places is given a score on wheelmap.org. A third of these are outside Germany. Wheelmap is translated into 22 languages and is accessible via iPhone and Android apps. The website has won numerous awards, among them the United Nations’ World Summit Award and “startsocial”, awarded by the German chancellor, Angela Merkel. Wheelmap does not just help people who use wheelchairs - it helps people in general become more aware of the needs of wheelchair users. In that sense, the project also contributes to a shift in awareness in German society. We are really proud to have contributed to this change.

Our next big step is to further improve Wheelmap. We want to develop a software tool that matches existing Wheelmap data with the data sets of third parties, i.e. based on GPS coordinates. This would enable chain stores, tourist information centers or municipal authorities to post the information they hold on wheelchair accessibility on Wheelmap. It would provide an opportunity to significantly increase the number of places marked on the map. We have named this tool “Matchy”.

And that’s where FedEx comes in: just as we were looking for potential associates to help fund Matchy. FedEx contacted us. They told us they were currently researching possible new partners to get involved in community engagement. FedEx offered us their support. Now, thanks to the FedEx donation, we are working on the development of Matchy.

Without the financial contribution from companies we would never be able to get our ideas off the ground. Having a supporter who shares your values and enables you to work for a social cause is the best thing that can happen. And the contributions from FedEx are helping us take our idea to the next level. 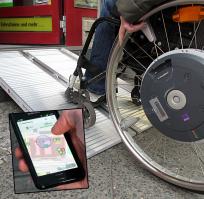