Homeless But Not Helpless

By Jenny Roberston, Communications Director FedEx Services
Sep 30, 2014 10:00 AM ET
Tweet This:
We can help the homeless get back on their feet. http://3bl.me/z62t9m @FedEx #volunteers, #ProjectHomeless Connect w/@CAFTHMemphis, + you
Blog

Four hours was all it took. In that time, my client Robert* obtained a vision screening, filed a social security form, applied for food stamps, picked up some new clothes, sat down for a photo shoot and had a good meal.

And in that same amount of time, I gained a new perspective on some of the most forgotten members of our community: the homeless.

As a member of communications management at FedEx, Robert is not my typical ‘client.’ But on Thursday, Sept. 18, he became my top priority as I helped him navigate Project Homeless Connect at the Memphis Cook Convention Center.

Started five years ago in Memphis by the Community Alliance for the Homeless, Project Homeless Connect brings together under one roof all of the services that the unsheltered homeless might need, including medical care, legal services, and housing assistance. Almost 750 guests moved through the stations, paired with volunteers. I was one of them, along with approximately 100 other FedEx team members who showed up to help.

This week marks the 10th anniversary of FedEx Cares Week, and more than 10,000 employees around the world are expected to step outside of their regular jobs to lend a hand to the communities where we live and work. Projects include caring for the disabled, elderly and children; food bank assistance; and greening of urban spaces.

I have volunteered at several FedEx Cares projects over the past 10 years, but never was the work this personal and the results this tangible.

As Robert and I moved from station to station, I saw the world through the eyes of someone experiencing homelessness. As I helped him fill out a form for a replacement Social Security card, I had to pause on the second line: what is your address? Such a simple question for most of us, but not for Robert. Later, I received a text from my husband: what should we do for dinner tonight? Such a casual choice, full of options for most of us, but not for Robert.

I tentatively asked questions about his situation and soon realized that he enjoyed sharing his story. He had a rough family life with little memory of his mother. He worked as a janitor for several years before the company was sold and he lost his job almost four years ago. He had trouble finding another job and soon found himself without a home and moving from couch to couch at friends’ houses, eventually ending up on the streets.

He was soft spoken and gentle as he told me stories about being robbed while he slept and standing in long lines for food. But he also told me about enjoying his days in a garden near downtown and how the volunteers are so kind at area churches.

I looked around the convention center at all of the other guests being served – 115 at the medical station, 174 getting eye exams, 369 screened for housing. But most striking was the number of individuals at the photography station where they could have a professional portrait made for free. I watched as guest after guest lined up…each combing their hair, tucking in their shirts, and straightening their backs. They faced the camera with dignity and pride, and I realized that is what the event was all about.

Four hours was all it took for Robert to re-establish his identity with Social Security, gain access to affordable food, and obtain a pair of glasses to give him new sight.

What can you do with half a work day?

How can you help?

To help the homeless in your area, contact your local United Way for volunteer opportunities.

*Name is changed to maintain confidentiality. 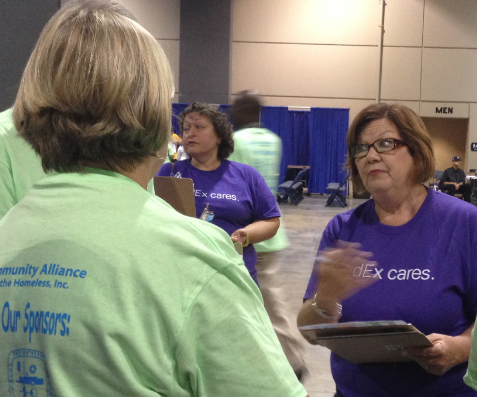