How Our Love for Sports Can Help Drive Social Good

As a Butler Alumnus, I was beyond proud that our small school from Indiana showed everyone that they could compete with the country’s basketball powerhouses. Existing fans like me grew more enthusiastic, and the team gained countless new Bulldog supporters as others around the country jumped on the underdog bandwagon.

Fellow Bulldog Matt McIntyre saw the excitement Butler’s rise in the tournament brought to our community and thought that same enthusiasm could be transferred to the world of non-profit fundraising.  Enter Brackets For Good, the only sport for nonprofits. Founded in 2012, they host bracket-style fundraising competitions where up to 64 hand-selected, nonprofits rally their supporters to compete for donations while earning increased awareness along the way.

And they’ve seen great success. Since 2012, Brackets For Good raised more than $2.7M for 448 charities through local market tournaments in Indianapolis, Louisville, Washington D.C., Ann Arbor, St. Louis, and the Twin Cities. These donations aren’t coming solely from the non-profits tried and true donor base, either: on average 30% of donations from first time donors.

Brackets For Good is designed to engage philanthropists no matter if they are the CEO at a large corporation, a director at a nonprofit, a small business owner, a full-time mom, a local sports fanatic, or a young professional. This approach to fundraising is an innovative way to activate individuals’ competitive spirit and connect them with organizations that are doing immensely important.

Nearly every person in Indiana can tell you what they were doing in March of 2010. The Hoosier state’s own Butler University became the Cinderella story of men’s college basketball tournament, making it all the way to the championship game only to lose in the final seconds. They enjoyed the journey so much that they did it all again as a #8 seed in 2011, outplaying others for a spot in the championship game once more.

Having been a part of Brackets For Good’s great success here in Indianapolis and watching them grow to host local tournaments in other markets, I knew there was a opportunity to do something even bigger: to reach more non-profits, to reach bigger non-profits, and to ultimately have an exponential impact on the causes those non-profits champion.

By teaming up with Brackets For Good to host the first-ever Brackets For Good U.S.A. national tournament we’re able to use the power of AT&T’s network for social good and bringing the opportunity to both non-profits and new philanthropists across the country. The 64 participating non-profits are headquarters in 30 states from coast-to-coast and represent causes from hunger to animal welfare to education and everything in between.

We’re thrilled to be a part of the tournament and wish all the non-profits the best of luck as the tournament tips off at 8pm CST tonight. You can support your favorite non-profit – or find a new cause to get behind – by visiting usa.bfg.org. It’s competitive giving. Everybody wins. 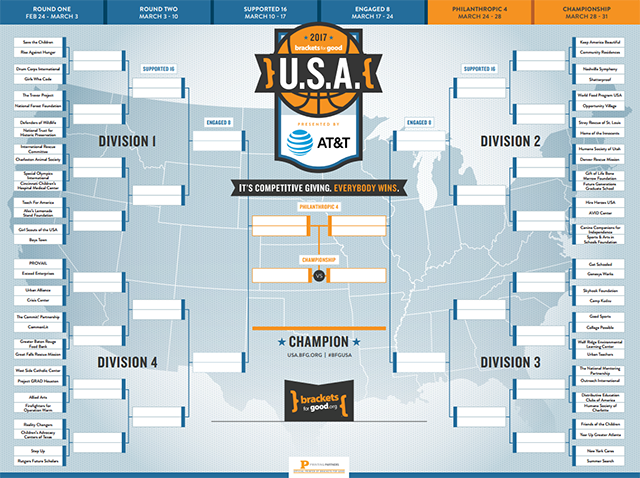