The Power of Two, Plus You! OpenLetter2013

Sep 6, 2013 12:10 PM ET
Tweet This:
2 musicians trying to make a difference: The Power of Two, Plus You! Please support #OpenLetter2013 http://goo.gl/aKnDRz New on @MurnPost
Blog
The Murninghan Post Blog

The Takeaway: Two friends from Boston, increasingly alarmed by the dearth of meaningful action on climate change, decided to take matters into their own hands. The pair are crowdfunding a full-page ad in The Wall Street Journal calling out the world’s most influential people for their non-action on climate change. The ad is an open letter, the main theme of which is the slow-moving tragedy of one generation handing the next an increasingly damaged planet.

Editor’s Note: Sometimes ya gotta do what ya gotta do. I often get requests for this or that, and usually turn them down. But this one is irresistible, and so good, so good.

The other day my friend, tech guru, and MurnPost technical strategy adviser Joshua Gay had an idea. Josh suggested to his friend Deb Nicholson that I might be interested in helping her promote a climate change awareness/justice campaign through indiegogo, an independent worldwide funding platform.  The effort, undertaken by Jordyn Bonds and Mike Gintz, began as an Open Letter that Jordyn intended to post to her blog, Skybondsor.

Jordyn wrote it “during a particularly despairing moment” but after showing it to her friend Mike, decided to place it in a major newspaper as a full-page ad, because that was the best way of making it stand out. Mike also suggested tapping crowd-funding resources, so that like-minded people might have a chance to get involved, too.

As Mike wrote me a little while ago, they’re both “superpals. Jordyn lives with her husband in Brighton and I and my girlfriend live in Somerville. Jordyn and I both lived in the area for over a decade, and met via playing music in the local rock scene. She’s originally from Arkansas; I’m originally from New Hampshire. We both work in the web industry – she’s freelance and I work at an agency in Davis Square, Somerville.”

I think they’re adorable because they represent the power of two people who burn to make a difference. They don’t have an organization behind them, or big funders, or a flashy event. They’re simply trying to send a message, and spending a heckuva lot of energy devoted to doing so.

I hope you consider helping their campaign to make powerful people understand, as Willy Loman said, that “attention must be paid”. Theirs is a compelling argument, and I figured,What better way than to show the multiplier effect of the Power of Two than to get You involved, as well?

Please consider making a contribution, and spreading the word to your friends and colleagues.

Climate counts—and so do the efforts of each and every one of us, to do what we can, when we can, how best we can. If you go to Jordyn and Mike’s website, you also can suggest powerful people you think need to see this letter, too.  (Please continue reading, here.) 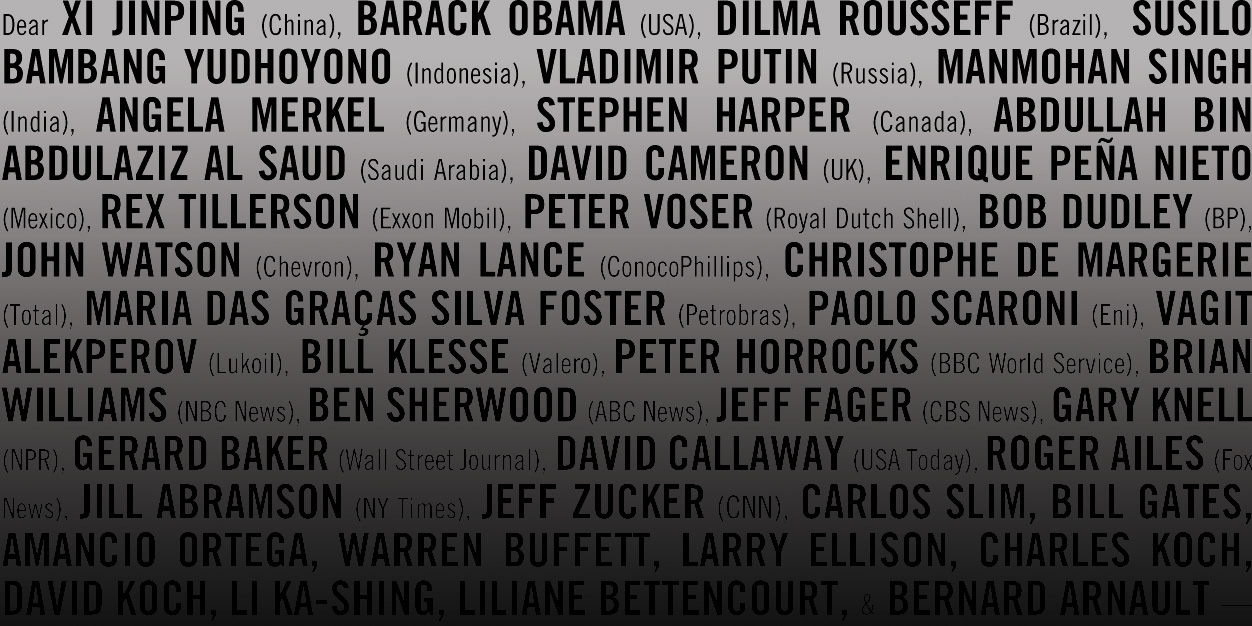