To Bomb or Not to Bomb—Which Rationality? Whose Debate?

The TakeAway: The swirl of action surrounding whether or not to intervene militarily in Syria tends to overlook opportunities, beyond polling, for average people to weigh in. That’s bad for deliberative democracy—especially when military power is involved. As a “prismatic case”—e.g., one both immediate (“To bomb or not to bomb?”) and long-term (“What is our moral obligation in the world?”) such questions demand broader citizen engagement rather than remain dominated by pols, pundits, and policy wonks.

In nooks and crannies, some of that is happening via social media platforms such as Facebook, or the “comments” sections of digital media outlets. Our challenge, as citizens, is to use them more, to listen to and learn from each other, and help restore deliberative democracy to its proper place. Here’s a glimpse into three citizens who refuse to let others do all the talking, and crowd out the rest of us.

President Obama’s speech to the nation Tuesday night about intervening in Syria answered some questions, but raised more. While most Americans are weary of yet another war and oppose intervention, there are compelling moral, political, economic, and environmental issues embedded in this “wicked problem”—“wicked” both literally (the government of President Bashar al-Assad and the atrocities inflicted) and figuratively (a highly complex tangle of multiple issues, involving life and death). Looming over it all: the “Responsibility to Protect” (R2P), adopted unanimously at the U.N. World Summit in 2005.

Most of the debate has occurred behind closed doors until, on August 31st, the President said that even though he believed he had the authority to carry out military action without specific congressional authorization, he was going to “seek authorization for the use of force from the American people’s representatives in Congress…I  know that the country will be stronger if we take this course, and our actions will be even more effective.  We should have this debate, because the issues are too big for business as usual.”

That was a welcome move by many who believe that Congress should play a role in these things, even though technically the President doesn’t need to. What’s at stake is an international commitment forged in the aftermath of World War II with the creation of the United Nations and the Universal Declaration of Human Rights. You don’t need Congress to ratify what’s already been endorsed. Throughout, the President seems to be “thinking out loud”—a laudable stance in this era of “world disorders“, given multiple actors, possible outcomes, and high stakes.   Please continue reading here... 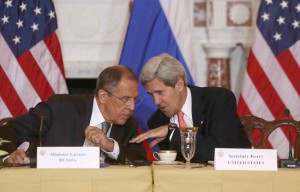