Why Manatees Love Lounging in Florida

Tourists come to Crystal River, Fla., for the manatees, and the manatees come for the springs.

Florida’s natural springs average 72 degrees year-round. The clear, cool water, which would be chilly for human swimming, is like a snuggly blanket for the giant marine mammals. The manatees float about the springs and eat copious amounts of sea grasses as if it were a lazy Sunday morning.

The springs’ clarity provides a window to their underwater world, and Crystal River is the nation’s largest natural warm-water refuge where tourists can swim with manatees in their natural habitat. Manatee-based tourism, the city says, is the fastest growing contributor to the economy.

Four hundred manatees at a time might huddle in Kings Bay, a collection of 70 springs which includes the Crystal River National Wildlife Refuge, but most don’t stay there all year. Manatees migrate to Florida’s natural springs from the Gulf of Mexico’s coastal waters as the weather gets colder. When the warm weather returns, they make their way back to the coast where they can travel as far west as Texas and as far north as Massachusetts.

That’s a long way to swim, and manatees need to rest along the way. Florida’s small creeks, estuaries and even power plants along the coast provide much-needed habitat.

At power plants, including Duke Energy’s Crystal River Energy Complex about 85 miles north of Tampa, water exits the plant and warms a canal where manatees find a safe resting place. Most of the complex’s manatees come at the end of fall or beginning of spring. As many as 80 manatees gather in the canal at the height of each season.

Each manatee family generally follows the same migration pattern each year. The route is a tradition passed down from mother to calf, and marine biologist Dave Bruzek has monitored aquatic wildlife near Duke Energy’s plants for 30 years.

He leads the company’s manatee monitoring program where his team observes the number of manatees, their health and behavior daily. They also study external factors like water temperature, meteorological conditions, thermal output of plants and how these things affect the manatees’ behavior.

While natural habitats like springs are the ideal refuge, they are declining because of pollution and increased boating – the manatees’ biggest threat. Most manatees have scars from boat strikes, and, statewide, at least 104 manatees – a record high – were killed by boats in 2016, according to Florida Fish and Wildlife Commission.

Bruzek’s team tracks the manatees with satellite data and by observing the animals’ scar patterns. The team submits their observations to the U.S. Geological Survey’s Sirenia Project, a collection of manatee scar pattern records. The database, started in 1978, contains more than 3,000 manatees and can be used to estimate survival rates, track migration and identify rescued manatees.

“The ultimate goal is to minimize the impacts to the manatees,” Bruzek said. “That’s my job, and I take that very seriously. I’m the manatees’ spokesperson.”

The Crystal River Energy Complex has four coal-fired units, an inactive nuclear plant and the under-construction combined-cycle natural gas plant, which will begin serving Florida’s 1.8 million customers in 2018. The temperature of the canal depends on which combination of plants are generating energy. Bruzek’s research will help predict if manatees will find a new place to rest when canal temperatures fluctuate.

The complex’s canal is about 10 feet deep and 1 1/2 miles long, and it is not open to public boaters. There isn’t much food in the canal because water flowing from the plant stirs the sediment, but Bruzek said there are luxuriant grass beds for the vegetarians about a mile away. Most manatees are about 8 to 10 feet long and weigh 800 to 1,100 pounds. They can eat up to 15 percent of their bodyweight – more than 100 pounds – each day.

“You can see them in the morning when the sun comes up,” he said, “they’ll swim out to the grass beds and feed there all day.”

More than 40 years since moving to Florida to be a marine biologist, Bruzek still enjoys protecting Florida’s favorite underwater mammal and watching calves playfully swim and tug at their mothers.

“They have that magic when you see them,” Bruzek said, “and everyone I interact with is as passionate as I am and does everything they can to ensure protection of those animals.” 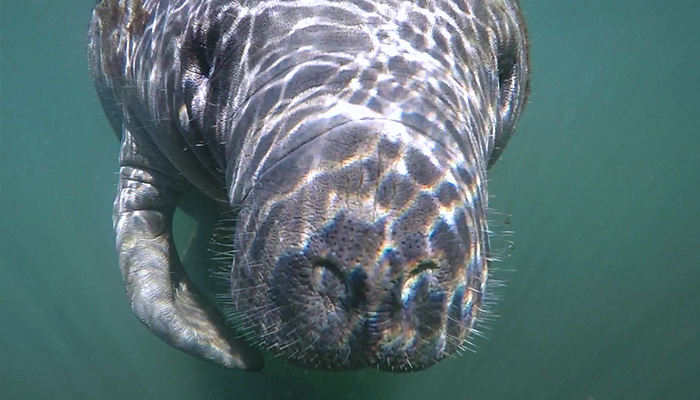 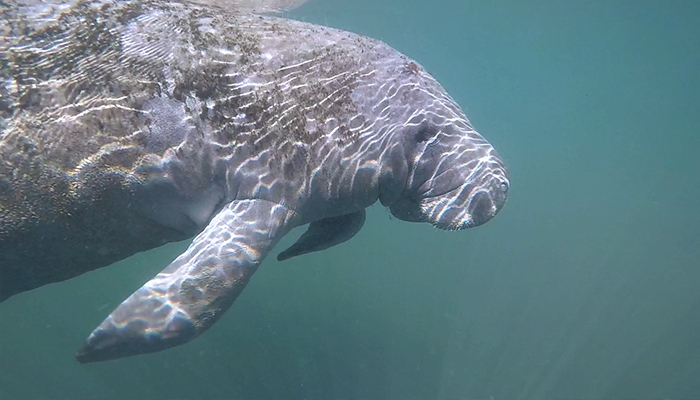 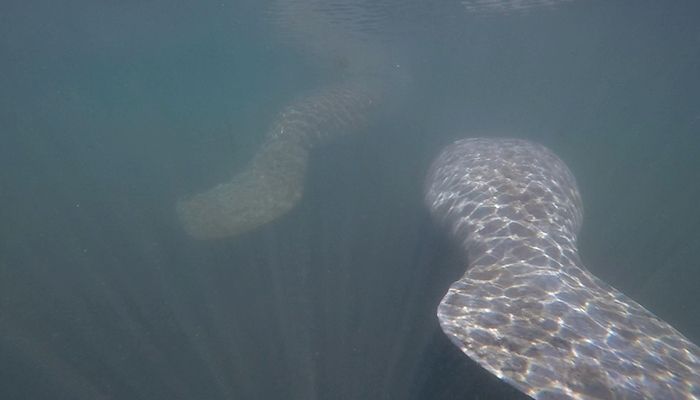