Totaling about three acres and nestled in a neighborhood among vacant land, occupied and abandoned homes, MUFI’s urban agrihood features a bustling two-acre urban garden, a 200-tree fruit orchard, a children’s sensory garden, and more. Annually, the urban garden provides fresh, free produce to about 2,000 households within two square miles of the farm.

“Over the last four years, we’ve grown from an urban garden that provides fresh produce for our residents to a diverse, agricultural campus that has helped sustain the neighborhood, attracted new residents and area investment,” said Tyson Gersh, MUFI president and co-founder.

In an effort to expand upon MUFI’s urban agrihood model, the all-volunteer nonprofit is joining forces with BASF and Sustainable Brands®, a global community of business innovators, to restore a three-story long-vacant building across from MUFI’s urban garden into a Community Resource Center (CRC). A healthy food café is also planned to be located on vacant land next to the CRC. Both are scheduled to be unveiled as part of Sustainable Brands ‘17 Detroit conference held at Cobo Center May 22-25.

The 3,200 square-foot, box-shaped CRC will offer educational programs, event and meeting space, and serve as the organization’s new operational headquarters. It will also house two commercial kitchens on the first floor that will service the café and allow for future production and packaging of valued goods. The former apartment complex was purchased by MUFI at auction in November 2011.

“BASF is inspired by MUFI’s efforts to build and expand this innovative neighborhood model,” said Charlene Warren-Wall, Director of Sustainability, BASF. “Through this project, BASF will support the local community, and showcase our expertise and technologies to improve energy efficiency, increase durability, and speed of construction.”

Joining BASF is General Motors, Herman-Miller, and environmental firm Green Standards. General Motors is strengthening its commitment to Detroit and will support MUFI’s urban agrihood through its recently announced partnership with Herman Miller’s rePurpose program. Through the program, which is managed by environmental firm Green Standards, GM is repurposing tens of thousands of pieces of office furniture and other surplus office items resulting from the renovations occurring at its Warren Technical Center, Milford Proving Ground, and global headquarters in Detroit. The GM rePurpose program will outfit the facility, with purposeful spaces designed by Herman Miller for collaboration and community.

Architectural design and construction is managed by Integrity Building Group of Detroit. Founded in Detroit, the full-service Construction Management and Architectural firm specializes in adaptive reuse/renovation and historic restoration projects throughout Southeastern Michigan, with a primary focus on historic districts of Detroit.

Today’s announcement expands MUFI’s reach and investment in Detroit’s North End. Since 2012, the organization has spurred area investments and volunteer service hours equating to about $4 million. More than 8,000 volunteers have collectively contributed more than 80,000 volunteer hours over the last four years. According to Independent Sector, a leadership network for nonprofits, foundations, and corporations, a volunteer hour is valued $23.54 in Michigan.

The centerpiece of MUFI’s urban agrihood is its urban garden that features more than 300 vegetable varieties. The urban garden provides easily accessible, free produce to neighborhood residents, area churches, and food pantries. Since its first growing season in 2012, MUFI has distributed more than 50,000 pounds of free produce.

“We've seen an overwhelming demand from people who want to live in view of our farm, Gersh said. “This is part of a larger trend occurring across the country in which people are redefining what life in the urban environment looks like. We provide a unique offering and attraction to people who want to live in interesting spaces with a mix of residential, commercial, transit, and agriculture."

MUFI has several projects underway including the restoration of a long-vacant home into student intern housing, a two-bedroom shipping container home, and the recent deconstruction of a fire damaged home bordering the farm. The home’s basement was retained and is being converted into a water harvesting cistern that will automatically irrigate the garden while preventing runoff into the Detroit’s sewer system.

Founded in late 2011, The Michigan Urban Farming Initiative is an all-volunteer nonprofit whose mission is to use urban agriculture as a platform to promote education, sustainability, and community in an effort to uplift and empower urban neighborhoods, solve social problems, and develop a broader model for redevelopment for other urban communities. The group’s focus is the redevelopment and growth of a two-square block in Detroit’s North End through alternative and cost-efficient models. 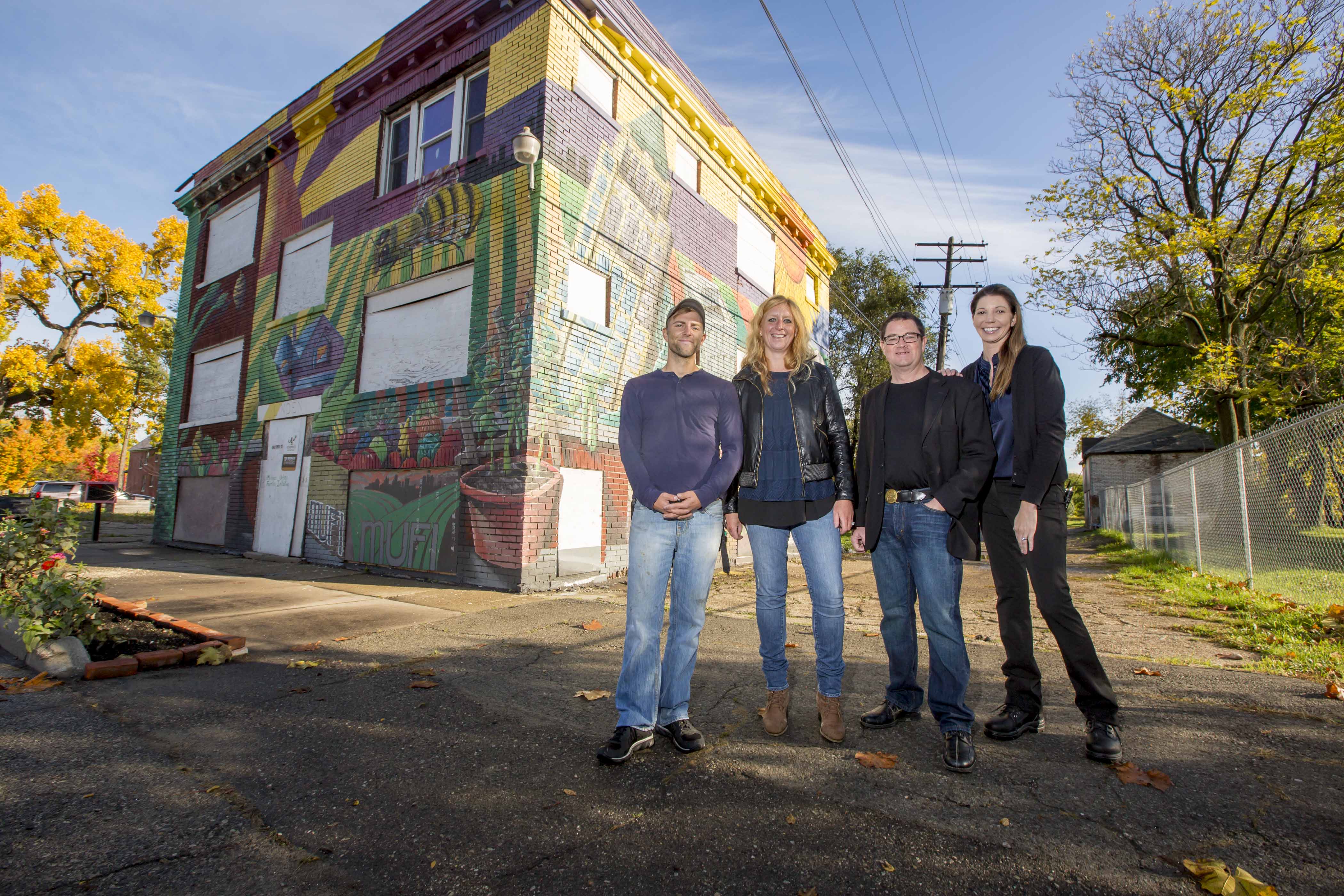